Three Minneapolis organizations have spent the summer working to improve the relationship between Minneapolis police and the community.

Urban Ventures, Urban Youth Conservation and Hawa’s Wings each received grants from Heal America. The Dallas-based movement provided nearly $2 million to dozens of groups across 18 cities for a Summer of Healing initiative, which aimed to decrease violence and bridge divides between communities and law enforcement.

Last weekend, Summer of Healing Ambassadors Leon Ford and Ryan Tillman visited Minneapolis. Ford is a criminal justice reform advocate who was shot and paralyzed by an officer, while Tillman is a corporal in a California Police Department.

“I just hope everyone walks away like ‘Hey, you know what? That’s my brother, my sister,” said Tillman. “Just realizing we’re all human beings, we’re probably all more similar than we are different.”

Tillman and Ford attended a dinner hosted by Hawa’s Wings. The local nonprofit organization held four events throughout the summer for about 50 Minneapolis students and more than a dozen MPD officers. 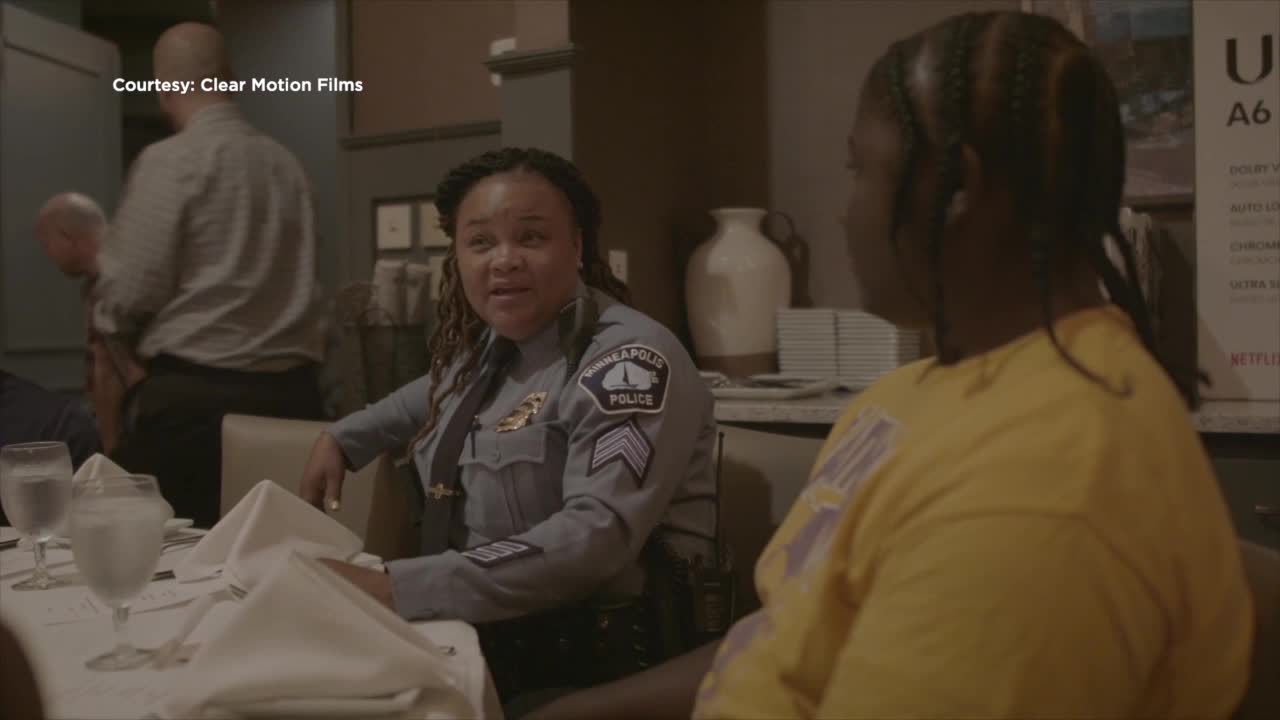 A Minneapolis police officer speaks with a youth at a community event (Courtesy: Clear Motion Films)

“The growth was crazy, because I remember from day one the cops were over there, kids over here. Everybody in their space, you know?” said Korboi Balla, Hawa’s Wings CEO and founder. “And then we got to the third week and we’re talking career path, like how ‘oh, I can be a police officer?’”

The first outing was at a bowling alley, followed by a day at Valley Fair and then an escape room trip. Police left their uniforms at home.

“It wasn’t about ‘What’s going on here, who did what, what kids did what?’” said Balla. “It was more of like how can we heal? This healing process, how do we even start that? How do we have a conversation?”

Balla watched as the relationships grew as the weeks passed.

“When my job reached out to me and said that there was an opportunity for us community service officers and law enforcement officers to interact with the community, I automatically signed up for all of the events,” said MPD Community Service Officer Adnan Didovic. “Interacting and being part of these events is kind of a way to break the ice and get step out of your comfort zone for us as well as the teens.”

He described the summer bonding activities as “just the beginning”.

“We all come from different backgrounds, we all face different challenges,” said Officer Didovic. “Just having them do the best that they can with whatever they want to pursue, I think that was one of the best things about all of these events.”

It was also an important month for Edison High School student Damari Ramsey, who described having a negative perception of police before participating in the events.

After attending the events, Ramsey told us, “I feel they can be trusted.”

He also expressed feeling encouraged by the experience.

Balla started his nonprofit after losing his restaurant in the fires following George Floyd’s murder. His organization has grown from providing essential supplies to a program that empowers young people to pursue entrepreneurship.

“Seeing the growth over the last 30 days, my thought shifted in the second week — like this is amazing, this is what we need,” said Balla, who is already planning additional events in the future.

He told us he walked away from the experience with a renewed sense of hope.

“The hope that we can all heal,” he said. “Seeing people for who they are […] just giving people the opportunity to have a conversation. I think that’s the most important part, we can heal and it starts with each and every one of us to take the initiative to talk.”

Urban Ventures hopes to cultivate a similar conversation at a music festival it’s planning for Sept. 11. The event aims to create connections between the community and MPD.

“There’s just a lot of intentionality for it from the beginning,” said Benny Roberts, the vice president of youth and career programs for Urban Ventures. “With the day and the program, we could build something that helps the community move forward as a whole. The community really can’t thrive without all of the entities there, with all of the entities having a good experiences with one another.”

They plan to shut down 4th Avenue outside of Urban Ventures. A basketball hoop will be set up for community members to compete with officers in friendly competition.

A stage will be erected in the parking lot. There will be three headlining acts, plus officers will share their own talents.

“There will be some performers on the force that are into the arts,” Roberts explained. “The performers were actually really excited about the mission of it as well so I think it kind of tells us too that although the community is hurting, they are hoping to move forward and looking forward to moving forward. It’s critical, you can’t stay in one place forever.”

It’s a first-of-its kind event for the nonprofit organization. Urban Ventures focuses on using education and career mentorship to propel youth towards a successful path.

After George Floyd’s murder, they started inviting Minneapolis police leadership to their campus for forums with its community.

“We really see this as a continuation of something we were trying to do, especially over the last two or three years,” said Dave Hawn, the CEO of Urban Ventures. “There’s a lot of hurt, a lot of hurt, and Benny and I are not so naive to think that we can solve it with an activity or two or three or five, but what we are trying to do is inspire communication, getting to know each other in maybe a different way than they have experienced the police in the past.”

Roberts added, “For the presence to mean something different, much different, than responding to an emergency.”