The Minneapolis police chief said Thursday the city may not wait until the end of Derek Chauvin’s trial to reopen the area known as George Floyd Square.

The intersection at 38th and Chicago has been blocked off by barricades since George Floyd died in police custody in May.

"People are hurting. They need that intersection reopened. The best public safety remedy right now is to open up and get that intersection flowing again," Minneapolis Police Chief Medaria Arradondo said during a news conference Thursday.

Arradondo did not give a specific plan or timeline but hinted that the city may not wait until the trial is over, as previously planned.

"We are not going to let the trial dictate when it’s the right time to safely reopen that intersection, so the plans I present to Mayor Frey will not be based on the trial timeline, it’s going to be based on public safety need," he said. 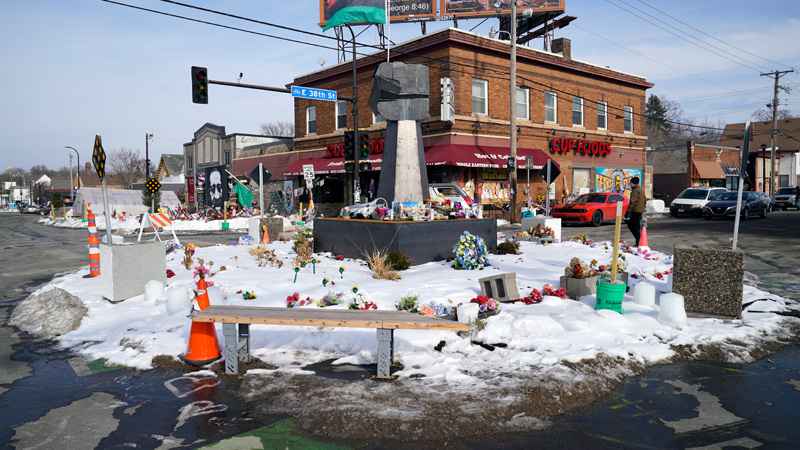 George Floyd Square is shown on Feb. 8, 2021, in Minneapolis. Ten months after police officers brushed off George Floyd's moans for help on the street outside a south Minneapolis grocery, the square remains a makeshift memorial for Floyd who died at the hand of police making an arrest. The trial of former Minneapolis police officer Derek Chauvin will begin with jury selection on March 8.[AP Photo/Jim Mone]

This is the second day in a row city leaders have addressed concerns surrounding 38th and Chicago.

On Wednesday, the police chief and mayor were joined by federal law enforcement agencies to announce a new partnership in dealing with increased crime and violence in the area. They said there has been a 2,543% increase in Shotspotter activations around George Floyd Square in the last year, along with a 240% increase in robberies and 378% increase in assaults.

"The current situation at 38th and Chicago is unacceptable and will not and must not be tolerated," Chief Arradondo said during Wednesday’s news conference. "As chief, I refuse to abdicate one block, one city block, to a group of individuals who choose violence over peace."

The federal law enforcement partners in this new initiative include the FBI, ATF and U.S. attorney for Minnesota.

"Our goal is to help restore safety, security and peace by bringing to bear the resources of federal law enforcement to help investigate, to help arrest and to help prosecute those individuals who are committing federal crimes," U.S. Attorney for Minnesota Anders Folk said Wednesday.

Still, questions remain over exactly how the city will handle reopening the intersection.

Arradondo said Thursday that he will present "several options" to Mayor Jacob Frey.

"I will make sure that I’m providing him the best, safest, efficient and most effective plans for his review, that obviously take into account the community," Arradondo said.

5 EYEWITNESS News asked Andrea Jenkins, the city councilmember who represents the area in and around George Floyd Square, about the timeline for taking action.

"In my mind, the city needs it open as soon as possible," Jenkins said Thursday. "My constituents in this community deserve to have a safe and livable community."

5 EYEWITNESS News also visited 38th and Chicago Thursday and spoke with people inside who have been manning the barricades. They are pushing back on the city’s proposed plans.

"Injustice closed these streets and we think only justice should reopen them," Danny Connelly said. "No justice, no streets."

Jenkins said she has heard from business owners in the area who have lost 70% of their revenues over the last year due to challenges within George Floyd Square.

"I would like the intersection at 38th and Chicago, which is now known as George Floyd Square, to be an open functioning thoroughfare for the entire city, so we can have more safety for the residents who live there, for the businesses who operate there, for all the people who are concerned about this issue. Yes, I think reopening it would be a positive step moving forward," Jenkins said.

She believes the community can reopen the intersection and work toward racial justice at the same time.

"This is not an ‘us against them’ type of situation. This is an opportunity for us to all come together," Jenkins said. "And one of the things that’s really missing from these debates is compassion. I think we really have to bring some of that back into this conversation."

Frey said he is meeting regularly with leaders of various departments on the plan for reopening the intersection and will "continue to provide regular updates."