The city of Minneapolis on Friday agreed to pay $27 million to settle a civil lawsuit from George Floyd’s family over the Black man’s death in police custody, even as jury selection continued in a former officer’s murder trial.

Crump, in a prepared statement, said it was the largest pretrial civil rights settlement ever, and "sends a powerful message that Black lives do matter and police brutality against people of color must end."

The Minneapolis City Council emerged from a closed session to announce the record settlement, which includes $500,000 for the neighborhood where Floyd was arrested. Floyd family attorney Ben Crump called a news conference for 1 p.m. that was to include family members.

Breaking News: Minneapolis City Council about to vote on settlement of #GeorgeFloyd family lawsuit of $27 Million dollars. $500K will go to the community around 38th and Chicago.

Floyd’s family joined Crump for the announcement, expressing gratitude to city leaders. They also shared hope this will encourage changes to policing in America. 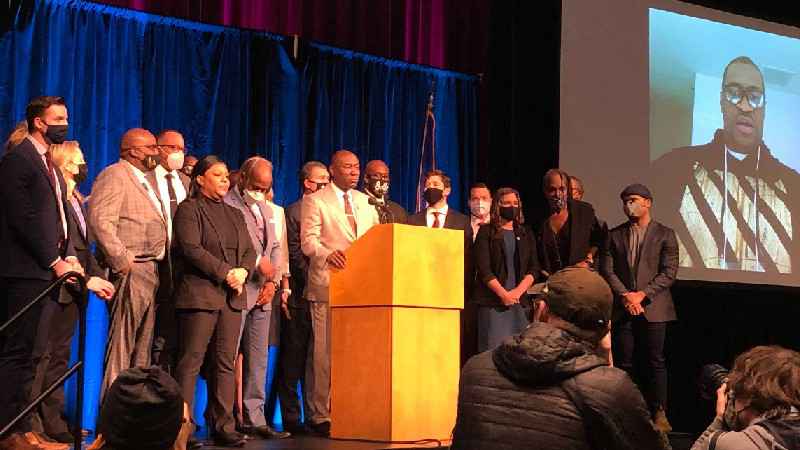 “I thank the state of Minnesota for getting this settlement taken care of,” said Philonise Floyd, George Floyd’s brother. “Even though my brother is not here, he’s here with me in my heart because if I could get him back, I would give all of this back.”

They also thanked the millions of people who protested across the country and world in the wake of Floyd’s death.

“America we need to heal, this nation needs healing, our family needs healing,” said Philonise Floyd. “Everybody around this world who has marched with us on the front line or on the couch – it does matter your heart was in a good place – I’d like to thank you all for that, thank you so much. May George live in power.”

Floyd was declared dead on May 25 after Derek Chauvin, a former officer who is white, pressed his knee against his neck for about nine minutes. Floyd’s death sparked sometimes violent protests in Minneapolis and beyond and led to a national reckoning on racial justice.

"I hope that today will center the voices of the family and anything that they would like to share," Council President Lisa Bender said. "But I do want to, on behalf of the entire City Council, offer my deepest condolences to the family of George Floyd, his friends and all of our community who are mourning his loss."

Council Vice President Andrea Jenkins, who represents the area surrounding 38th and Chicago, called for "peace and calm in our streets" as the Chauvin trial continues.

"Regardless of the outcome of the trial now underway, the City, the Council, the Mayor, department staff – we are all committed to seeking justice in all forms," Jenkins said. "We cannot control the actions of the past. But we do have control over our actions in the days, weeks and years to come and how we move forward together, to begin the healing process."

Floyd’s family filed the federal civil rights lawsuit in July against the city, Chauvin and three other fired officers charged in his death. It alleged the officers violated Floyd’s rights when they restrained him, and that the city allowed a culture of excessive force, racism and impunity to flourish in its police force.

The settlement was announced on the fourth day of jury selection in the criminal trial of Chauvin.

“Justice doesn’t really wait, it happens when it happens and it happened today,” said attorney L. Chris Stewart. “We’re not going to delay justice because we’re worried about the outcome of a criminal trial.”

Minneapolis City Attorney Jim Rowader said, “We’re trying to be very respectful of the criminal proceedings that are now underway and I think it would be very wise for all of us to refrain from commending on something that is ongoing."

In 2019, Minneapolis agreed to pay $20 million to the family of Justine Ruszczyk Damond, an unarmed woman who was shot by an officer after she called 911 to report hearing a possible crime happening behind her home.

The federal lawsuit sought unspecified compensatory and special damages in an amount to be determined by a jury. It also sought a receiver to be appointed to ensure that the city properly trains and supervises officers in the future.

We asked trial attorney Robert Bennett, who represented Justine Ruszczyk Damond’s family in their wrongful death suit against the city, about the timing of this settlement.

“I think it really is a matter of risk analysis on both sides, what is this trial going to do to the public’s view,” said Bennett. “Every case is different.”

Just days after Mohamed Noor was convicted of murder in Ruszczyk Damond’s death, the city announced the $20 million settlement with her family. It was largest of its kind in city history until now.

“Everyone recognized Ruszczyk Damond and Floyd, the city’s position was never going to be any good and would likely just get worse as you shine light on it,” said Bennett. “I think it was smart on the city, I think it gave some ending.”

“They will have to think through how to ask a question about that without exposing somebody to information they may very well have said I’m not watching anything like that,” said Burke. “They made tremendous progress this week in getting a number of jurors. If you look at the people who were excused, you could make a pretty good guess next week’s batch is going to be pretty similar, people are going to come in with certain attitudes […] I don’t know [the settlement] is going to change an awful lot of minds.”

The past year has dramatically shifted our city’s trajectory, and today marks another milestone in shaping a more just future for Minneapolis. Our settlement with George Floyd’s family reflects a shared commitment to advancing racial justice and a sustained push for progress.

"On behalf of all of my family members, I am pleased that this part of our tragic journey to justice for my brother George is resolved. Although I wasn’t able to physically be with my family for the official announcement of the settlement reached between my family and the city of Minneapolis, I am with them in spirit.

"Our family suffered an irreplaceable loss May 25 when George’s life was senselessly taken by a Minneapolis police officer. While we will never get our beloved George back, we will continue to work tirelessly to make this world a better, and safer, place for all.

"Going forward, my work as Founder of the George Floyd Memorial Foundation will be a priority both in George’s birthplace of Fayetteville, North Carolina and around the country.

"The purpose of the Foundation is to honor my brother’s memory and legacy as a community-minded volunteer who would truly give the shirt off his back to someone who needed it.

"While our hearts are broken, we are comforted in knowing that even in death, George Floyd showed the world how to live."