SEIU Healthcare Minnesota and Iowa has filed its notice to strike starting on Monday, Oct. 3.

“We were not able to make the progress we were looking for,” said Kellie Benson, the senior mental health coordinator at Abbott Northwestern.

“We’re having trouble with short staffing which then can lead to issues with care,” said Benson. “If we have people who are going through something really major and having a hard time and may be acting out with violence or aggression, we’re unable to safely take care of the patients on the unit and the patient that’s struggling.” 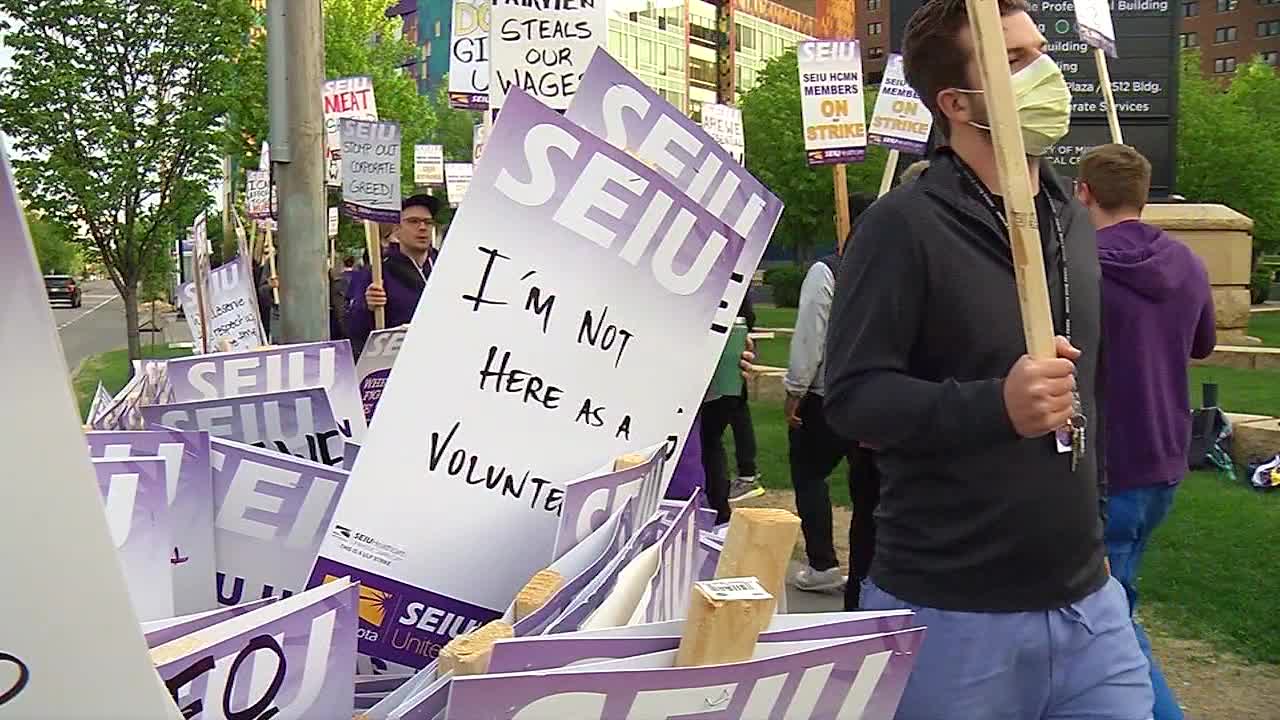 Mental health workers hit the picket lines in May and are now planning to walk off the job again (KSTP).

The community trauma during the pandemic has led to more patients and more acute patients, according to Benson.

The union argues increasing pay is another critical piece to meeting demand.

“With higher pay, that does attract more people who are qualified to come into the field to kind of raise that staffing level up as well,” she said.  “As of right now, to have this job is not sustainable. I am unable to pay my rent at times just due to the low pay of this job.”

In a statement, the health system said, “Allina Health values our employees and recognizes the critical services senior mental health coordinators provide to the community. We have negotiated in good faith with the union 18 times since they chose to unionize. It is typical for newly formed bargaining units to take more than a year, on average, to reach an agreement on their first contract. There are additional bargaining sessions this week and throughout October to enable the parties to reach an agreement and avoid a strike which did not advance our discussions in May when SEIU first took employees out on strike.

Throughout negotiations, Allina Health has offered an economic package that provides competitive compensation and additional benefits. We have also offered the same language the union agreed to on behalf of other Allina Health employees regarding workplace safety. Striking does not benefit anyone. However, we will be prepared to continue caring for our community in the event a settlement is not reached.”

M Health Fairview said in a statement, “We share the desire for our psych associates, senior psych associates, and behavioral assistants to work in an environment where they feel safe, valued and supported. We have negotiated in good faith with the union for the last 9 months to align on a contract that supports our employees and provides us with the flexibility we need to provide top-quality care to our patients. We have made significant progress, including reaching 17 tentative agreements.

Health care organizations across the country are in the middle of a dual staffing and mental health crisis. We will continue to bargain in good faith with our colleagues to settle on a contract all parties believe is equitable and fair. Safe patient care is a top priority and we are currently working on a contingency plan. Care will continue to be provided in our inpatient mental health units if an agreement isn’t reached by next week.

“I think we’re actually seeing something new and that is strikes that are not focused on causing economic damage or pressure for the employer,” said Peter Rachleff, a labor historian. “These strikes are really protests or demonstrations, a cry out to the public to pay attention to what’s happening.”

He points out we’ve seen frontline workers across several industries organizing over the last two years, from hospital workers, to grocery store employees, to baristas and railway workers.

“This has been a particularly active year both in terms of organizing and in terms of striking,” said Rachleff. “The pandemic has created certain kinds of stress that have made people’s jobs more difficult to do and stressful to do and on the other hand the pandemic has kind of revealed deeper, longer patterns.”

Giving the example of railroad workers, he said, “Workers have struggled for 30 years with a kind of ever leaner employment structure so that time off — time to go to the doctor, time to attend funerals, weddings, graduations — have all been at a premium. […] The pandemic has made it feel like a crisis, not just something that you have to grit your teeth and bear.”