Simone Biles’ withdrawal from the women’s team gymnastics competition Tuesday at the Tokyo Olympics put a spotlight on mental health and the extreme stress elite athletes like Biles are under.

Minnesota’s own Royce White can relate. White led both De LaSalle and Hopkins high schools to state basketball titles. He starred at Iowa State and was taken in the first round of the NBA Draft by the Houston Rockets in 2012. But anxiety crippled his career, and ever since, he’s been an outspoken mental health advocate.

According to White, mental health isn’t just about anxiety, depression or PTSD or OCD or addiction. 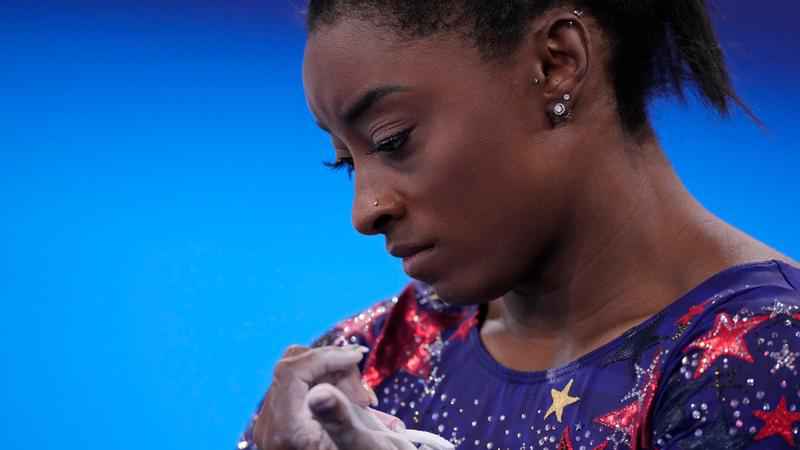 Simone Biles, of the United States, leaves after performing on the uneven bars during the women's artistic gymnastic qualifications at the 2020 Summer Olympics, Sunday, July 25, 2021, in Tokyo.[Ashley Landis/Associated Press]

For White, mental illness is a double-edged sword.

"Anxiety, for me personally, always kept me sharp and always kept me focused. I was afraid to fail," White said. "I was afraid to disappoint my teammates, I was afraid to let the people down who had invested so much in my athletic career. But it also had very real physical symptoms that that contributed to, you know, fatigue and sleepless nights the day before competition and things of that nature as well. So a double-edged sword. But I would say, in fairness to myself in my own career, my anxiety has never stopped me from being able to go out and perform at an elite level relative to the rest of the competition. And I think you’d say the same for Simone."

White believes we need to talk more about mental illness and understand it’s an issue with a lot of people.

"The No. 1 antidote, in my view, is to be honest," he said. "You know these issues that people deal with psychologically in our society are already tough enough. Then to have bear shame and to have to uphold lies along with it. So be honest. And I think Simone did a good job of being honest today. I think a lot of other people need to take a look in the mirror and be honest with themselves about who they are and the way that they live on a daily basis."

What would White say to Biles if he had a chance to speak with her?

"Thank you," he said. "I commend Simone Biles for what she did. I still think that mental health is the greatest social issue we face. And the sooner we double down and commit on really changing in the progression of that issue, the better our society will get across the board, across all issues."