9 p.m. — Search and rescue efforts are underway in the town of Forada, according to Julie Anderson, director of Douglas County Emergency Management. She says a suspected tornado damaged as many as 100 structures in the area. So far no deaths or major injuries have been reported. A number of homes have heavy damage or are a complete loss, but it’s unclear exactly how many, Anderson told 5 EYEWITNESS NEWS.

Meanwhile, authorities in Todd County are advising people to stay away from the town of Eagle Bend as crews clear the roads and assess damage in the area.

6:24 p.m. — A tornado warning is in effect for parts of Carver, Wright and McLeod counties as the storm system approaches the Twin Cities metro. The alert is set to expire at 6:45 p.m.

A separate tornado warning was issued for central Wright County through 7 p.m., including Delano, Buffalo, Monticello and Albertville.

There is an additional risk for 70 mph winds and quarter-sized hail in a severe thunderstorm warning area that includes Hennepin, McLeod, Nicollet, Sibley and Wright counties through 6:45 p.m.

6 p.m. — A tornado warning has been issued for Cass County in north-central Minnesota and remains in effect through 6:15 p.m. “This is a particularly dangerous situation,” the National Weather Service cautioned.

5:20 p.m. — Tornado warnings have been issued for eastern Todd and northwestern Morrison counties, as well as southeastern Wadena County, through 6 p.m.

According to KSTP Meteorologist Matt Serwe, this line of storms has a “history of producing tornadoes” and could come with “widespread damaging winds.”

5:04 p.m. — A “large and extremely dangerous tornado” was spotted over Eagle Bend headed northeast at 55 mph, according to the National Weather Service. Eastern Douglas and Todd counties remain under a tornado warning until 5:30 p.m.

A tornado warning was also issued for Otter Tail and Becker counties in northwestern Minnesota. The alert remains in effect through 5:45 p.m.

4:50 p.m. — A number of tornado warnings were issued in west-central and southwest Minnesota for:

4:37 p.m. — Southwestern Otter Tail County is under a tornado warning until 5:15 p.m. Henning, Ottertail, Deer Creek, Clitherall, Vining, Urbank and Almora are all within the affected area.

KSTP Meteorologist Matt Serwe reports that a confirmed tornado touched down near Alexandria.

4:25 p.m. — A tornado warning has been issued for Douglas and central Pope counties until 5 p.m. and will be near Glenwood, Lowry, Alexandria and Carlos.

4:07 p.m. — A new tornado warning is in effect through 4:30 p.m. for Grant County in west-central Minnesota, including Elbow Lake, Hoffman, Ashby, Herman, Barrett, Wendell and Norcross. 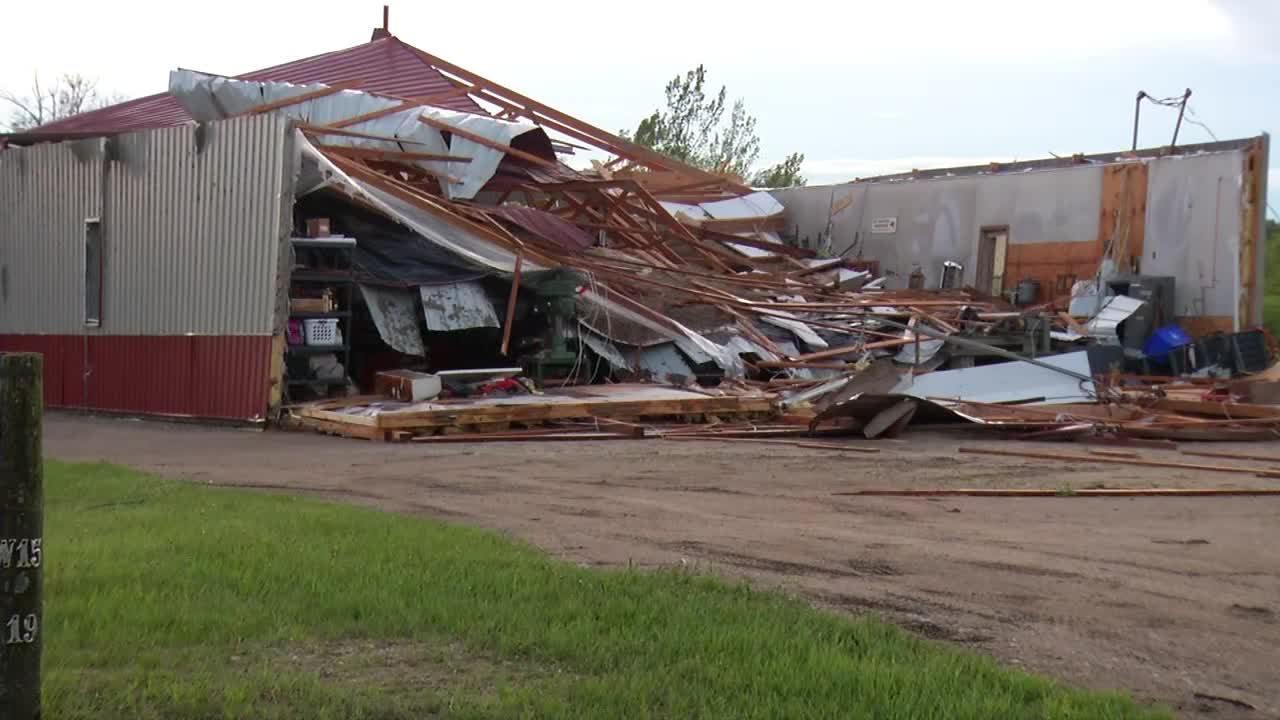 A building is destroyed Monday, May 30, 2022, after a suspected tornado plowed through Forada, Minnesota. (KSTP)

Another tornado warning was issued for parts of Douglas and Pope Counties and remains in effect until 4:45 p.m. The affected area includes Alexandria, Glenwood, Starbuck and Kensington.

A tornado warning for Lyon County, including the cities of Marshall and Cottonwood, is also in effect through 4:45 p.m.

3:38 p.m. — Tornado warnings are in effect through 4 p.m. for southeastern Big Stone County and southern Stevens and western Swift counties in west-central Minnesota.

A tornado watch is in effect for most of western and north-central Minnesota until 10 p.m. As of 3 p.m., the alert area did not include most of the Twin Cities metro.

Serwe said eastern Minnesota, including the Twin Cities Metro, still has a chance of isolated tornadoes and large hail from about 6-9 p.m.

Live weather updates can be found at the 5 EYEWITNESS NEWS interactive radar.

If you are able to safely take a photo or video of the weather or storm damage, you can send them to KSTP by CLICKING HERE.

INITIAL REPORT: Weather will be hot, humid and breezy for the first part of Memorial Day, with severe storms expected throughout the state during the afternoon and evening hours.

In the Twin Cities metro area, meteorologist Matt Serwe said storms with strong winds, hail and heavy rain will be possible through the 10 a.m. hour.

Winds may pick up to 40 mph out of the south following the morning round of storms, pushing in more heat and humidity to send high temperatures into the upper 80s.

Serwe says severe thunderstorms are expected to develop across western Minnesota around 3-4 p.m., with numerous tornadoes possible, some of which could be strong and include long-track tornadoes.

The National Weather Service (NWS) has increased its severe risk warning for Monday across Minnesota, adding there is potential for a tornado outbreak across the western part of the state during the afternoon and evening. Tornado strength could be at least an EF2.

Storms are then expected to arrive in the metro area between 6-9 p.m. Monday, and weaken as they move into west central Wisconsin.

NWS has posted a flash flood watch for portions of northern Minnesota from Monday night through Tuesday morning.

Straight-line winds were reported in the Montevideo area, causing trees to fall over.