Meet the jurors: A look at the 14 jurors in the Kim Potter trial 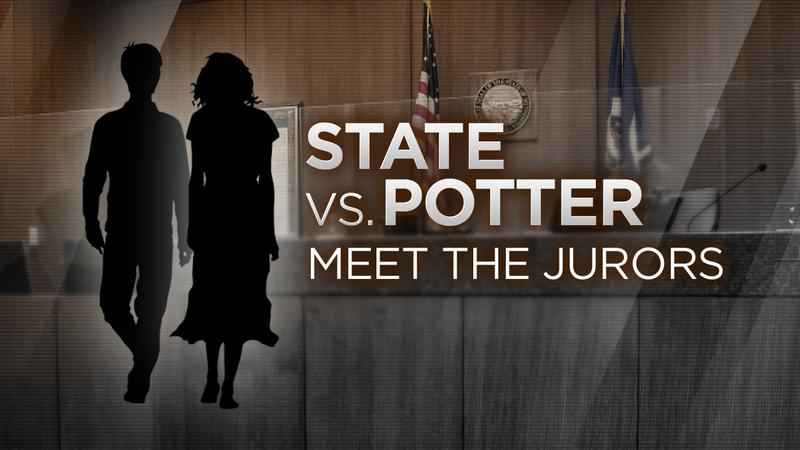 Friday, the final two of 14 jurors were seated in the trial of Kimberly Potter, the former Brooklyn Center police officer charged in Daunte Wright’s death.

The jurors are anonymous and haven’t been allowed to be shown on camera or identified by name, as according to Judge Regina Chu’s order. However, some details about the panel are known.

Below is a look at what else we know about the jury that will decide Potter’s guilt. Opening statements in the trial are set for Wednesday.

Juror No. 2, who’s described as a white man in his 50s who works as an editor in the field of neurology, noted he believes "blue lives matter" is somewhat unfavorable because it was simply created as a counter-cry to Black Lives Matter. However, he said he’s against defunding police and supports the good work police officers do. It will be the first jury he’s served on.

Juror No. 6, a white woman in her 60s who is a retired teacher, was the second juror seated for the case. She said the anniversary of the death of one of her daughters is quickly approaching so she may be emotional during the trial. She added that her first reaction to Wright’s death was, "How could this happen?" She told the court that law enforcement officers have dangerous jobs but she believes they should be able to handle themselves. She also called herself very anti-gun, said she never owned a gun and believes laws about what kind of guns people can buy should be looked at. She noted she watches a lot of true crime programs.

Juror No. 7 is a 29-year-old white man who is an overnight manager at Target and is in a rock band. He said he went through a firearm safety class when he was 14 and owned a stun gun when he toured with his band about five years ago but he no longer has it. He also said he has some family members in law enforcement but they’re not very close. Overall, he said he was slightly distrustful of police but grateful for the good work they do, although he said he doesn’t believe having a badge disqualifies someone from being held accountable. He was also questioned again on Thursday because defense attorney Earl Gray identified him by name and people he knew messaged him following his initial questioning on Tuesday. He said he "was just freaked out" and concerned about his privacy but decided to remain a juror.

Juror No. 11 is an Asian woman in her 40s who described herself as a rule-follower. She said she has a brother who was in the Marines and lived near what she called the "scary" demonstrations in Minneapolis over the past year. She noted she believes police keep order but mistakes happen. She was carefully questioned by the state about her ability to be impartial but was the fourth juror seated.

Juror No. 17, a white woman in her 20s or 30s who recently graduated from college, was the first juror questioned Wednesday. She said communities will always need police officers but some bad things will always happen. It’s her first time being called for jury duty. Her questioning was one of the quickest during jury selection, lasting under 10 minutes in total.

Juror No. 19, a Black woman in her 30s who’s a teacher and mother. She said she lives in the area of some of the demonstrations after Wright’s death and saw some of the damage. She has a Taser for protection but has never used it or taken any training classes. Juror No. 19 reported feeling somewhat unfavorable toward both Black Lives Matter and "blue lives matter." On Wright’s death, she said it’s terrible that situations like this continue to happen. On police officers, she says it’s a tough job of service and requires a certain level of professionalism, but officers know that going into it so people have a right to second-guess officers’ decisions. In Wright’s shooting specifically, she called the incident chaotic. She has a close family member who was in the military but they don’t see each other often. On her gun ownership, she notes they’re for hobbies and other purposes besides self-defense. Her questioning was one of the longer ones in the selection process, as she was questioned at length by Chu, defense attorney Paul Engh and Assistant Attorney General Matthew Frank before being seated. She’s never served on a jury before.

Juror No. 21 is a white, married man in his 40s with young children. He said his personal experiences with police have been excellent and was mixed about the demonstrations over the past year, saying the looting and damage was bad but the things protesters were saying were important conversations to have. He also noted his dislike of "blue lives matter," saying it seems like a marketing move to him and a counter cry to Black Lives Matter, which he said actually tries to point out that Black people are killed at a higher rate than others, although he said he hasn’t personally researched that. He reported a slightly negative initial impression of both Potter and Wright. He previously sat on a criminal jury about protesters trespassing but said nothing from that trial would affect his decisions in this case.

Juror No. 22 is a white man in his 60s who’s been a registered nurse since 1994 and is currently in a nurse practitioner program. His wife was a law clerk for a judge at one point but has since retired. Based on the video he saw on the news, he believes Potter "possibly made an error." He said the demonstrations and events over the past year have been difficult on everyone, from citizens all the way up to police. Juror No. 22 said police officers have to make difficult decisions and he somewhat agrees they shouldn’t be second-guessed, although he expects them to follow the law. He also trusts police unless proven otherwise and expects them to protect him. He’s also a waterfowl hunter.

Juror No. 26 is an Asian woman in her 20s who is finishing up her final exams. She said she worked at a place that was damaged during demonstrations over the past year and said she was upset because "the protests were being taken advantage of" by unrelated people. She noted she didn’t want to be a juror in this case but said she believes it’s her civic duty. Juror No. 26 said she believes everyone should be able to express their opinions, regardless of what they are, and she has a brother in the Marines but they don’t talk about their jobs much.

Juror No. 40 is a white man in his 40s who works as an IT information security consultant. He cited some concerns over his and his family’s safety after the trial. He also said he was previously arrested but "got what I deserved." He said he initially was going to become a police officer before finding his current career but determined being an officer wasn’t right for him, mainly because of a fear about having to use his gun. He marked a somewhat negative impression of both Potter and Wright. He also wrote on the questionnaire that he’d assume Potter would’ve had muscle memory for which side her Taser was on. He said he strongly feels that police keep him safe but added that it’s fair to second-guess officers and said officers across the U.S. don’t treat people of color the same as white people. He also said Black Lives Matter brings important things to light but he hasn’t seen the organization create any change. He also said he "feels bad for jurors" because it’s a tough spot to be in and noted he’s never served on a jury. He was the first juror seated on Thursday.

Juror No. 48 is a white woman in her 40s who used to work as an IT project manager and has two young children. She wrote that Wright’s death didn’t match the alleged crime and said she’s a little nervous around anyone in a position of authority, not just police. She said her dad and other family members were or are avid hunters and she’s been around guns before. She also had two grandfathers who served in the military. She hasn’t served on a jury before.

Juror No. 55 is a white man in his 50s who’s a field systems engineer for a cybersecurity company. He said his wife was the victim of an attempted carjacking in south Minneapolis last year and was pistol-whipped. He was in the Navy and was shocked by a stun gun in training many years ago. He and his wife started a flag football program for Minneapolis parks. Based on the video he’s seen, he said the situation between Potter and Wright seemed "complex and stressful." He added that he supports common-sense reforms in law enforcement and doesn’t want to get rid of police but rather "augment what we have" with mental health professionals. He also said he believes there is a problem of systemic racism. On "blue lives matter," he said he views it unfavorably because "you can choose your vocation but you can’t choose your skin color." Juror No. 55 owns two shotguns, two handguns and a rifle but said he doesn’t have a permit to carry.

Juror No. 57 is a white woman in her 70s. She was the first juror questioned Friday. Her father was an attorney and her son-in-law is also an attorney. On demonstrations over the past year, she said it’s a good time for society to examine the issues being raised. On the police, she said she generally trusts them but there are instances where that’s not true. She’s served on two juries, one of which included a police officer who arrested a Hmong man on the way to a funeral because an object was mistaken for a gun. She also wrote that jurors in this case "will carry a heavy burden of responsibility" but she would feel honored to serve. She is the first alternate juror.

Juror No. 58 is a white man in his 30s from Eden Prairie. His daughter’s godfather is a St. Paul police officer and he said they haven’t been able to see each other much during the pandemic. He insists he can be impartial and says everyone should be held accountable. He is the second alternate juror.