Monday, jurors received a detailed look at the autopsy performed on Daunte Wright as the trial of former Brooklyn Center police officer Kimberly Potter resumed for the fourth day of testimony.

Assistant Hennepin County Medical Examiner Lorren Jackson told jurors that the bullet that hit Wright injured his lungs and heart, killing him. "We refer to survival times in terms of seconds to minutes with these types of injuries," Jackson said, noting their severity and adding that the injuries weren’t survivable. Jackson stated Wright lost about 3 liters of blood and said that’s significant because someone of his size would only have 4.5 to 5.5 liters of blood in his body. The bullet was also found in his body.

The defense asked about the marijuana in Wright’s system and Jackson noted the level of THC metabolites in Wright’s blood was "on the high end" of the numbers he sees but still within the normal range of what to expect when someone uses marijuana. He added that it didn’t factor into Wright’s death.

Autopsy pictures weren’t shown on the live-streamed broadcast of the trial, per Judge Regina Chu’s order, but were shown in court while Jackson testified. 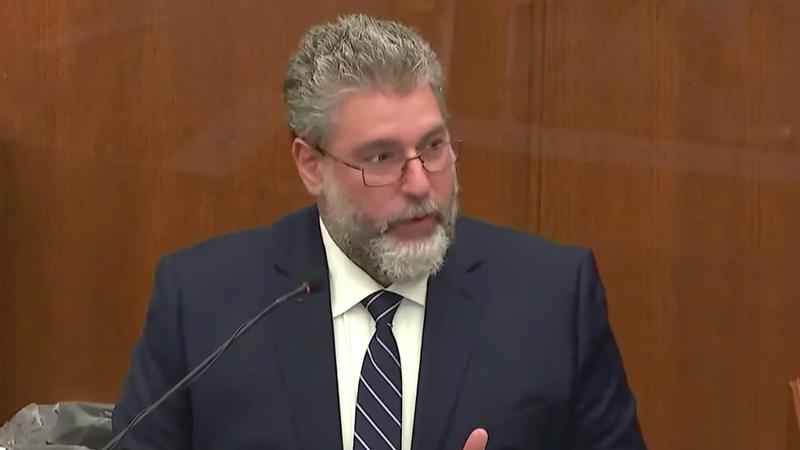 Jurors also heard from several Minnesota Bureau of Criminal Apprehension agents and forensic scientists who worked on this case. The forensic scientists confirmed many of the main points in the case, including that the blood in the driver’s seat of Wright’s car matched his DNA profile and the bullet and discharged cartridge casing came from Potter’s gun.

In a sea of technical terms on Monday, testimony from BCA Senior Special Agent Sam McGinnis had some more visual and basic information. He noted the differences between the gun and Taser used by Potter — grip, handle, grip texture, color, trigger and how to operate each — and stated that she didn’t spark test her Taser, as required by Brooklyn Center Police policy, on four of her 10 shifts with her Taser, including on April 10 and 11. He also noted Potter’s gun weighed more than twice as much as the Taser — 2.11 pounds to 0.94 pounds.

But the day had many pauses, largely due to objections from the defense and several ensuing sidebars. Perhaps the most affected by the objections was BCA Special Agent Brent Petersen, whom the state had planned to have walk the jurors through what he noticed when he watched body and dash camera video from Wright’s traffic stop. However, after the defense objected, Chu told the state that Petersen couldn’t tell jurors what evidence shows, saying, "The video evidence is the evidence."

The defense’s objections continued during McGinnis’ testimony but the state was able to work around that.

But with jurors seeming less engaged, likely due to all of the technical terms and explanations in addition to the frequent pauses, Chu dismissed the jurors early at 3:47 p.m. and told them, "I want to assure you that we’re still on schedule."

Meanwhile, the state filed two motions on Monday, asking the court to allow testimony relating to Potter’s union membership and limit the opinion of those who aren’t testifying as experts. Chu said she’ll review those so they can possibly be discussed Tuesday morning.

Court is scheduled to reconvene Tuesday at 9 a.m.