Minnesota may hit its omicron peak as soon as next week, according to the latest COVID-19 modeling from Mayo Clinic.

"We’re starting to see what looks like it will be a Minnesota peak very shortly," said Dr. Curtis Storlie, a data scientist at Mayo Clinic.

Storlie said the peak could happen anytime next week through the end of the month.

His team’s predictive modeling is based on analyzing COVID-19 patterns in other cities and case counts in Minnesota.

The state is currently seeing a spike in cases, with a positivity rate of 23%, according to the most recent data from the Minnesota Department of Health. 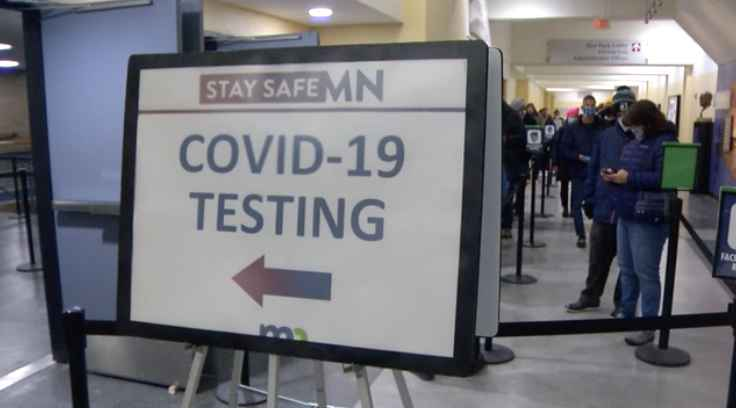 Storlie said it’s possible some parts of the state have already hit a peak.

"After that, there will be an abrupt decline in cases for several weeks," Storlie said.

Still, he noted the month ahead will be difficult.

"Hitting the peak — and I want to emphasize that — it doesn’t mean OK, everything’s behind us. People are still going to get infected on the way down, just as many on the way down as on the way up, and some of those are going to produce severe illness," Storlie said.

Critical care doctors in the metro also want to warn Minnesotans to be careful in the coming weeks.

"The fact of the matter is, this is not over, by a long shot. Hopefully, it’s going to be soon but we just don’t know that yet," said Dr. Joshua Huelster, a critical care physician at Abbott Northwestern Hospital with Allina Health.

Huelster said, even with the milder omicron variant, hospitalizations are still high, with unvaccinated patients getting the sickest.

Allina Health shared data from this week showing 78% of their COVID-19 patients in the ICU are unvaccinated, along with 85% of those on ventilators being unvaccinated.

"I am still taking care of people who have been here for weeks, in some cases months, and there’s no end in sight for those people," Huelster said.

Huelster noted there are some new patterns emerging when it comes to COVID-19 hospitalizations in the midst of this omicron surge.

"Just a few weeks ago, we were still getting multiple admissions a day into the ICU with active COVID," Huelster said. "The pace has definitely slowed down. There also appears to be a change, where we’re seeing more incidental cases. Those people don’t appear to be progressing to severe disease. Some currently diagnosed patients are having a much milder course, but we’re still seeing patients who are being devastated by this."

He urges people to continue to take proper precautions, including getting vaccinated and boosted and wearing high-quality masks.

Experts at Mayo Clinic said the behavior of Minnesotans will impact the trajectory of the current surge.

"If community behavior were to change and, for the next few weeks, everyone is wearing masks, we’re doing a little bit more avoiding of crowded spaces, it will send us down much faster," Storlie said.

"No one hopes more than us that this goes away. I just don’t think any of us are ready to celebrate yet. It’s just way too uncertain," Huelster said. "Over the last two years, we’ve been burned enough times that I don’t think anybody is overly optimistic. I think we’re more of a ‘believe it when we see it’ kind of thing."