Arik Matson spent several months fighting for his life after being shot in the head by a suspect in January 2020. Now he’s fighting to toughen Minnesota’s sentencing laws for suspects who commit first-degree assault against peace officers, corrections officers, prosecutors or judges.

"Every day since the incident I find out new stuff that I can’t do anymore," Arik testified before the Senate Judiciary and Public Safety Committee on Wednesday. "Such as walking on my own or walking really any distance."

Matson was shot by a suspect after responding to a call about a suspicious person in Waseca. The suspect had been paroled early from a previous felony offense.

"This guy has been in prison more than he’s been out of prison and our justice system needs to realize that’s an issue," Arik’s wife, Megan Matson, told the committee in online testimony during the virtual hearing.

The prosecutor who handled the case involving the man who shot Matson also testified. 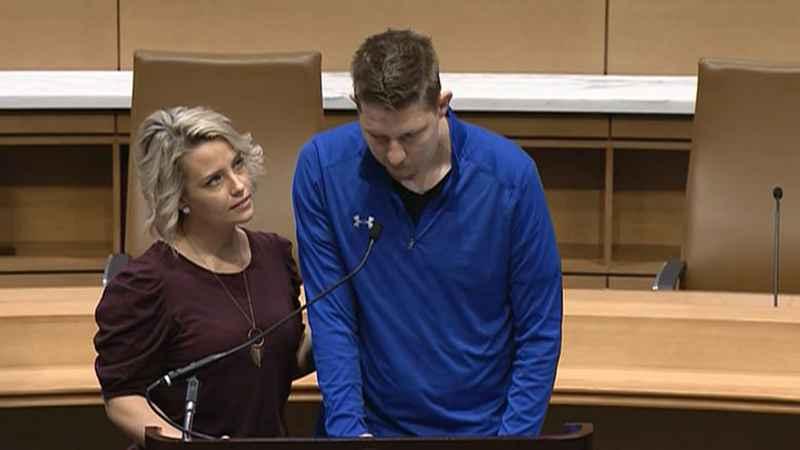 "I was shocked by a few issues in our current laws," said Rachel Cornelius, the Waseca County Attorney. "First, I was surprised to learn I could only get 20 years for what the defendant did to Officer Matson." Plus, she said he could be paroled in 14 years.

"I was flabbergasted that the consequences weren’t any greater for whether you shot at an officer versus actually shooting an officer," she said, "physically injuring them, in this case…gravely injuring Officer Matson."

In this case the suspect was found guilty and sentenced to 35 years because he faced multiple charges with sentences served consecutively. However, if he had just faced one charge the sentence would have been much less significant.

"We’re at a crossroads in policing," Brian Peters, executive director of the Minnesota Police and Peace Officers Association, told senators. "We’re seeing more violence especially against peace and police officers every single day. I’m asking for bipartisan support on this bill to send a clear message to society that this behavior is not going to be tolerated."

The bill ended up passing the committee with no dissenting votes, although one DFL senator who is also a lawyer voiced some concern about the bill.

"I’m a little nervous about removing discretion completely from the system as if the Legislature has the ability to foresee ahead of time all the nuances of any particular circumstance relating to the case," said Sen. Ron Latz, DFL-St. Louis Park.

DFL Sen. Karla Bigham of Cottage Grove said she was inspired to vote for the bill by hearing from Megan Matson about how Arik’s injuries impacted their family.

"This bill sets that example that if something happens that there’s justice and that’s why I’m kind of inspired by this bill and really want to help," she said.

The bill will need to pass through one more committee before getting to the Senate floor. There’s a companion bill in the Minnesota House.