‘I was told I have about 6 months to live.’ A Minnesota man begins a new chapter of life, after a history-making cancer surgery

The Maple Grove man is taking each day, one at a time.

“I was told I have about six months to live,” Voge says quietly. “The realization that while I’m riding that like, two years ago, I stopped doing this because I didn’t have the energy. I almost sold my bike before we left because I was expecting to die.”

That dire expectation came after what should have been a minor surgical procedure.

In January 2019, Voge visited his doctor for treatment of a hernia. 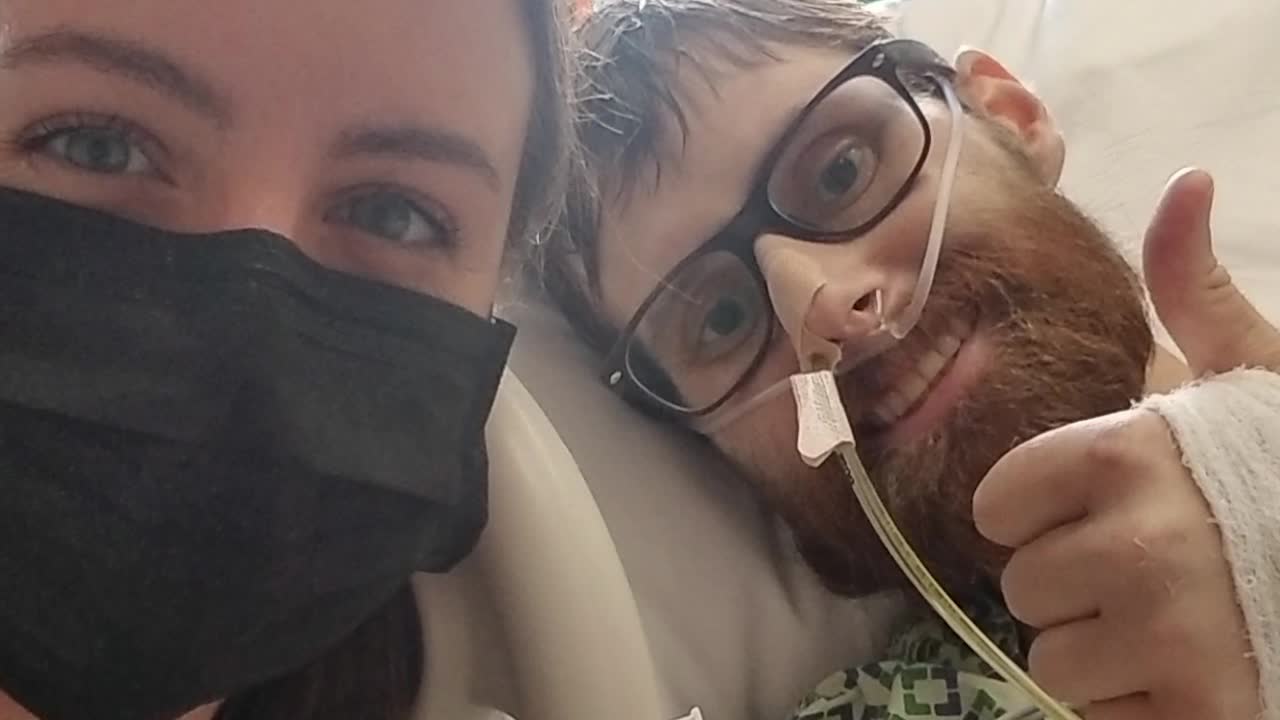 A photo of Andrew Voge and his wife during his treatment.

But subsequent blood work and a CT scan revealed something far worse.

“Like you have a ruptured appendix with pseudomyxoma peritonei, just basically cancer that’s floating around my abdomen,” Voge recalls.

The cancer, also known as PMP — forms tumors which spread to other digestive organs.

“I must say Andy was perhaps in the worst state I’ve seen patients in the last ten years,” he says. “He had, the tumor had invaded not only the GI tract, but also had put pressure on his liver and the bile duct, and also had caused pressure effects to the blood supply to the liver.”

In a year, it returned, encapsulating his stomach, which stopped working.

Voge began chemotherapy, but it wasn’t stopping the cancer.

“My surgical team at Mayo had done everything they could. We’ve kind of exhausted all the options that were available,” he remembers. “And they kind of told me like start finding a hospice and getting everything in order.”

But two months later, while at home, Voge learned his Mayo doctors had connected with the Cleveland Clinic.

He and his wife Rachel learned about multi-organ transplants as a way to potentially treat patients with PMP — by substituting cancerous organs for healthy ones from a donor.

“I think both of us kind of heard and like ‘really, you can take out all these organs and put donor ones back in?'” he now says.

The surgery was not without risks.

Doctors told Voge that between 30% and 40% of patients don’t survive.

A choice of living with cancer for the short term — or an uncertain outcome.

“It was mixed emotions of excitement but also needed some massive surgery,” Rachel says. “So there was a lot of fears going into it. Is he going to make it through the surgery and the transplant? How long is he going to survive after that? All of that goes through your mind.”

A donor was found that September, and Voge underwent surgery 24 hours later.

He had left a box of notes for Rachel to read during the 17-hour procedure.

The couple agreed to share some of those notes with us.

“Hey peanut,” said one. “Well, it’s finally here, transplant time as I am writing this, we are on the transplant list for one week.”

“I love you so much,” said another. “Take a moment to just breathe and relax a moment.”

“So I knew the first couple of hours were going to be pretty good, but then, maybe 12 to 18 hours, there’s not insignificant chance I won’t be still alive,” Voge says. “They got a little more difficult to write something that would be somewhat consoling, but not too difficult to read. Just bring up some really raw emotions.”

The couple has been together since high school.

This story does have a happy ending.

“This was his last hope. His back was against the wall. There was no other conventional operation that could be done for him,” Vaidya explains. “He was in a state that this was his only ticket out of the problems he was having. He traded his cancer cards for transplant cards.”

Voge’s recovery was not always a smooth one.

He spent nearly 50 days post-surgery in the hospital — and battled pneumonia, a blockage in his lungs and had episodes where his body rejected the donated organs.

The couple says their faith sustained them through all of this.

Voge is now at home, gaining strength every day — and getting back to riding his bicycle.

“So I picked up a rode bike and started riding, and started doing longer and longer, talking to some of my friends and decided to sign up for the ride.”

That ride will be a 100-mile fundraiser for “Fathers of the Fatherless” — an effort to raise money for children at risk.

“The goal is to, it’s just rescuing and helping children, so globally, the rescue a lot of children, abandonment due to wars and trafficked children,” Voge explains. “Locally, they do a lot of work just helping people, single parents or kids in the foster care system.”

The Voges have also started a non-profit called “Legacy2Inspire.”

The idea is to have a mobile shop where Voge can instruct kids on how to use woodworking and other tools.

He hopes to work with faith-based organizations in the St. Cloud area.

Meanwhile, Voge has pledged to his doctors that he will share his story with other cancer patients.

“It was always like I’m going this because I can stay alive but at the same point, I was the first candidate in the US to do it,” he says. “So I feel I have a little bit of responsibility to make sure other people know this is an option.”

You can find out more about Voge’s nonprofit here.