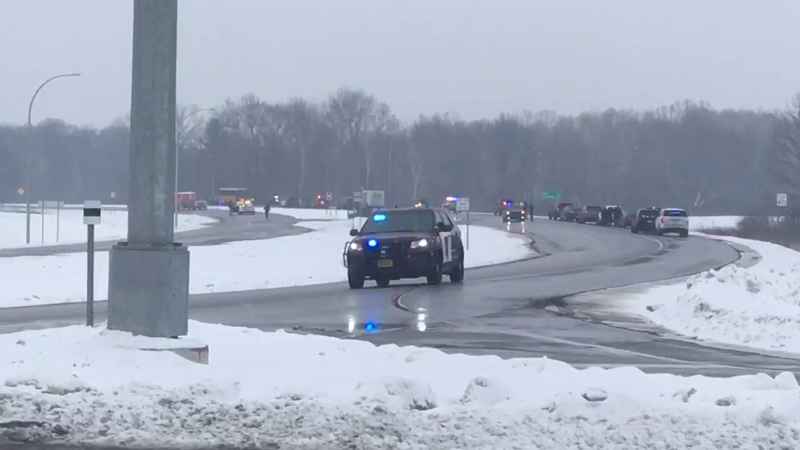 The man who was killed following a pursuit in Isanti County has been identified.

According to a release from the Minnesota Bureau of Criminal Apprehension, 27-year-old Dominic Lucas Koch of St. Croix Falls was identified as the man who died following a pursuit in Isanti County. Koch died due to multiple gunshot wounds according to the release.

Another man, 26-year-old Joseph William Heroff is charged with one count of first-degree aggravated robbery and one count of fleeing police in connection to the pursuit.

According to a criminal complaint, at 12:57 p.m., Blaine police officers were called about a shoplifting incident at a Kohl’s store in the city. While en route, officers learned two male suspects were leaving the parking lot in a white Jeep Compass. Officers attempted to stop the vehicle as it fled into a Menards parking lot but the vehicle continued until officers used a PIT maneuver.

With the Jeep stopped, the suspects then ran across a frozen drainage pond before carjacking a truck and driving north on Highway 65, the complaint states. A pursuit ensued until the truck was disabled near Braham. Officers said shots were then fired, and bullets hit a law enforcement K-9 and one of the suspects.

Heroff was taken into custody but Koch was pronounced dead.

The complaint states Heroff told officers that Koch decided to shoplift while they were at Kohl’s and he tried to dissuade Koch from stealing before going outside to wait in their car. A little while later, Koch ran out of the store with a cart full of items that he began shoving in their car.

Heroff said he was the driver at that point and began driving away to flee from law enforcement. After their vehicle was disabled and as they were running away, Heroff said Koch then pulled out a gun on the two people in a pickup truck and ordered them to get out. Heroff said he then got in the passenger seat of the truck and they drove off.

The man in the truck told officers he and his 9-year-old daughter were waiting in the truck for a birthday party that was about to start when Heroff and Koch approached them, pointed a gun and demanded they get out.

K-9 recovering after being shot during pursuit in Isanti County

The K-9 who was shot during the incident was released from the University of Minnesota Veterinary Medical Center and is continuing to recover at home.