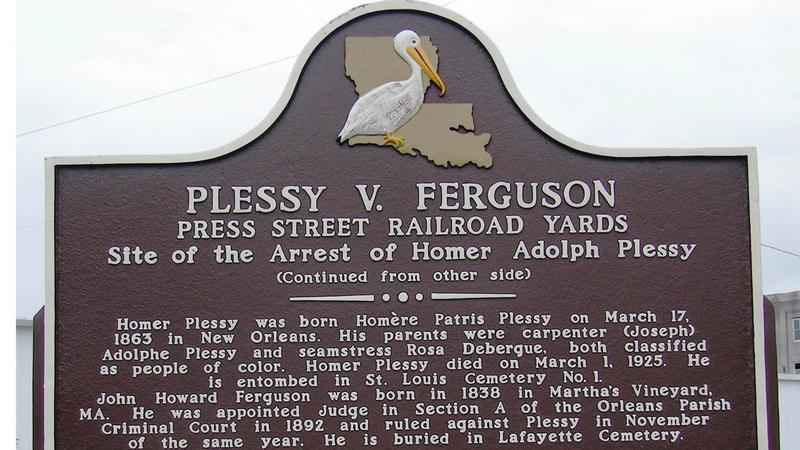 A marker commemorates the arrest of Homer Plessy, the Black man who was arrested for boarding a white-only train car in protest of a Louisiana law segregating trains.[Skywriter/Wikimedia Commons]

Louisiana’s governor on Wednesday posthumously pardoned Homer Plessy, the Black man whose arrest for refusing to leave a whites-only railroad car in 1892 to protest racial segregation sparked the U.S. Supreme Court ruling that cemented “separate but equal” into law for half a century.

The state Board of Pardons in November recommended the pardon for Plessy, who boarded the rail car as a member of a small civil rights group hoping to overturn a state law segregating trains. Instead, the protest led to the 1896 ruling known as Plessy v. Ferguson, solidifying whites-only spaces in public accommodations such as transportation, hotels and schools for decades.

Gov. John Bel Edwards held the pardon ceremony near the spot near where Plessy was arrested.

The purpose “is not to erase what happened 125 years ago but to acknowledge the wrong that was done,” Phoebe Ferguson, the great-great-granddaughter of the county judge who imposed Plessy’s punishment, said during the ceremony.

Justice Henry Billings Brown wrote in the 7-1 decision: “Legislation is powerless to eradicate racial instincts or to abolish distinctions based upon physical differences.”

Justice John Harlan was the only dissenting voice, writing that he believed the ruling “will, in time, prove to be quite as pernicious as the decision made by this tribunal in the Dred Scott Case” — an 1857 decision that said no Black person who had been enslaved or was descended from a slave could ever become a U.S. citizen.

The Plessy v. Ferguson ruling allowing racial segregation across American life stood as the law of the land until the Supreme Court unanimously overruled it in 1954, in Brown v. the Board of Education. Both cases argued that segregation laws violated the 14th Amendment’s right to equal protection.

The Brown decision led to widespread public school desegregation and the eventual stripping away of Jim Crow laws that discriminated against Black Americans.

Plessy was a member of the Citizens Committee, a New Orleans group trying to overcome laws that rolled back post-Civil War advances in equality.

The 30-year-old shoemaker lacked the business, political and educational accomplishments of most of the other members, Keith Weldon Medley wrote in the book ”We As Freemen: Plessy v. Ferguson.” But his light skin — court papers described him as someone whose “one eighth African blood” was “not discernable” — positioned him for the train car protest.

“His one attribute was being white enough to gain access to the train and black enough to be arrested for doing so,” Medley wrote.

Eight months after the ruling in his case, Plessy pleaded guilty and was fined $25 at a time when 25 cents would buy a pound of round steak and 10 pounds of potatoes. He died in 1925 with the conviction on his record.

Keith Plessy, whose great-great-grandfather was Plessy’s cousin, said donations collected by the committee paid the fine and other legal costs. But Plessy returned to obscurity, and never returned to shoemaking.

He worked alternately as a laborer, warehouse worker and clerk before becoming a collector for the Black-owned People’s Life Insurance Company, Medley wrote. He died in 1925 with the conviction on his record.

Relatives of Plessy and John Howard Ferguson, the judge who oversaw his case in Orleans Parish Criminal District Court, became friends decades later and formed a nonprofit that advocates for civil rights education.

Other recent efforts have acknowledged Plessy’s role in history, including a 2018 vote by the New Orleans City Council to rename a section of the street where he tried to board the train in his honor.

The governor’s office described this as the first pardon under Louisiana’s 2006 Avery Alexander Act, which allows pardons for people convicted under laws that were intended to discriminate.