As Russian forces pound Ukraine’s second-largest city with intense air attacks — and with Russia claiming it’s captured the key city of Lysychansk — a major change is underway in getting humanitarian aid from Minnesota to Ukraine.

Local groups are shipping out medical supplies in greater volume, with container ships used to bring tons of aid to the war zone.

“It’s ramping up dramatically,” says Joel Anderson, vice president of the nonprofit Matter 360. “We’re just seeing more of that desperation of getting the supplies to battlefield injuries.”

Anderson estimates there are a half-million pounds of medical supplies here, donated from area hospitals. There are smaller items like surgical tools, gauze kits and crutches, but the group’s St. Louis Park warehouse also holds larger supplies like beds and reclining chairs. 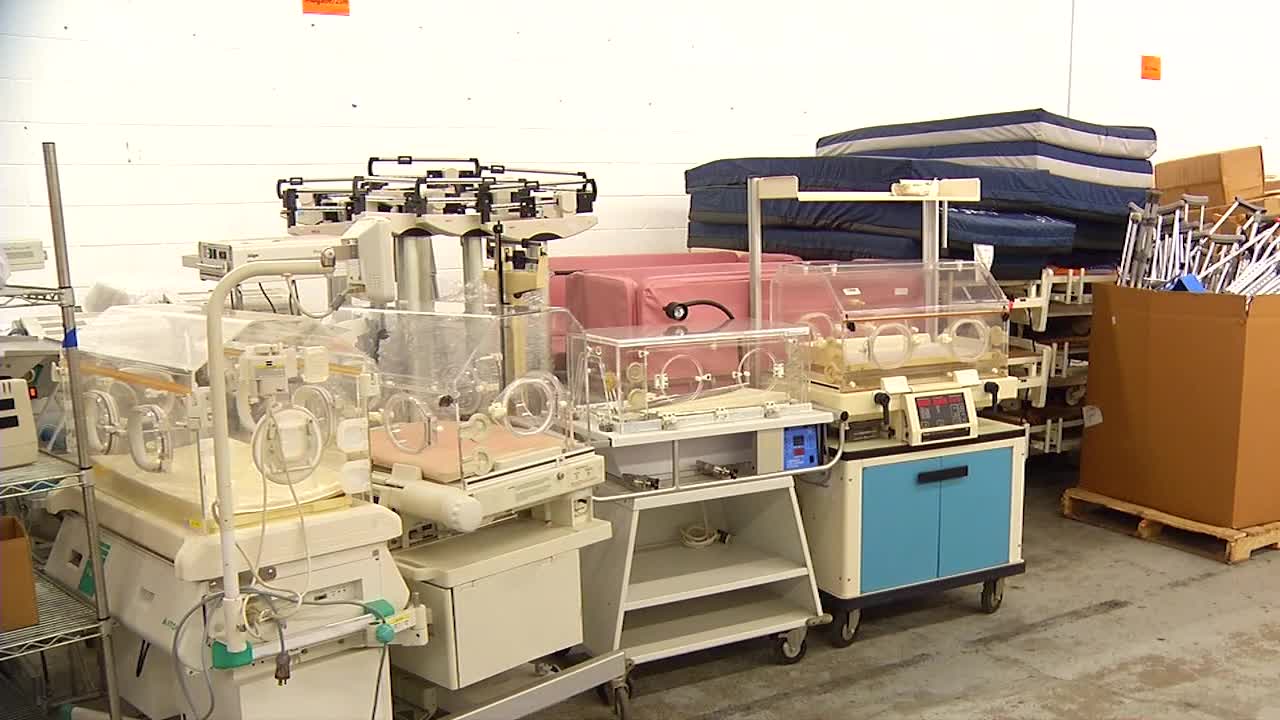 Matter 360 repurposes those supplies, then ships them out to aid workers and organizations.

Thousands of boxes worth of materials are to be delivered to Mark Lindquist and his humanitarian aid group A-Team Ukraine.

“It’s volunteer, unpaid, and just people trying to help the Ukrainians in as many ways as we can,” Lindquist said. “So many people have injuries of the lower extremities and the external fixation devices are in high demand in Ukraine for those injuries when you have a limb blown off.”

His new mission, he adds, is working with C.H. Robinson, an Eden Prairie logistics company, to transport 30 shipping containers of medical supplies to Gdansk, Poland, and eventually to Ukraine.

“So the math is that we have about 600 pallets we have sitting in Minnesota ready to go,” Lindquist explains. “Thousands of boxes that’ll end up to be about 150 to 200 tons of medical supplies.”

But first, those shipments must be inventoried to pass customs inspections.

Lindquist says the journey by container ship is expected to take about 23 days. He hopes to have those medical materials in Poland by the end of the month.

Then, Lindquist says, his team will transport those items by car or truck to hospitals in Kharkiv and Dnipro.

“We’ve partnered with local hospitals, military surgeons, to make sure those things are getting into the right hands of the right people at the right time,” he said.

With the war more than four months old now, both men say medical needs are changing.

That means moving items that can’t be easily transported by individuals on a commercial flight.

“Pallets of crutches, pallets of wheelchairs and even a few scooters — these things that yeah, you couldn’t get on a plane with a carry-on,” Lindquist says. “Making sure we get them there.”

“We’re still seeing individuals going over with baggage and just duffel bags full of supplies,” Anderson adds. “But there’s a real increase in full shipping containers that are shipping out.”

Anderson says battlefield conditions are changing the kind of medical supplies that are needed. For example, a foldable stretcher is much easier for medics to carry in the field.

Before now, the cheapest price Lindquist could find for commercial shipping was about 80 cents a pound.

He credits C.H. Robinson with being a huge help, offering to ship items for just a few cents a pound. Lindquist says that’s a big difference when shipping hundreds of tons of medical supplies halfway around the world.

He adds it’s helpful to have good contacts among the military community.

“I’m working with military veterans who are combat medics. We’re getting [medical supplies] into their hands,” Lindquist says. “If it’s tourniquets, and the individual first aid kits, things you can use in a combat trauma situation.”

Both Anderson and Lindquist believe the urgent need for medical supplies won’t be ending anytime soon.

“Making sure that significant supplies are not only going in today, but that they’ll be there for the next month, and in months to come,” Anderson says. “This could go on for the rest of the year easily.”