The thieves can be seen methodically stuffing footwear into plastic bags, then running out and driving away.

Dillon says it was over in just minutes.

“That’s the car they was in, right there,” Dillon exclaims, pointing to a video screen. “I imagine they broke a glass, they broke a window, gained entry that way and took shoes and whatnot.”

Dillon showed the video to 5 EYEWITNESS NEWS during a visit to his now-closed KKG Kickz store in Little Canada.

He says he’s still shaken by the overnight burglary on Feb. 23. 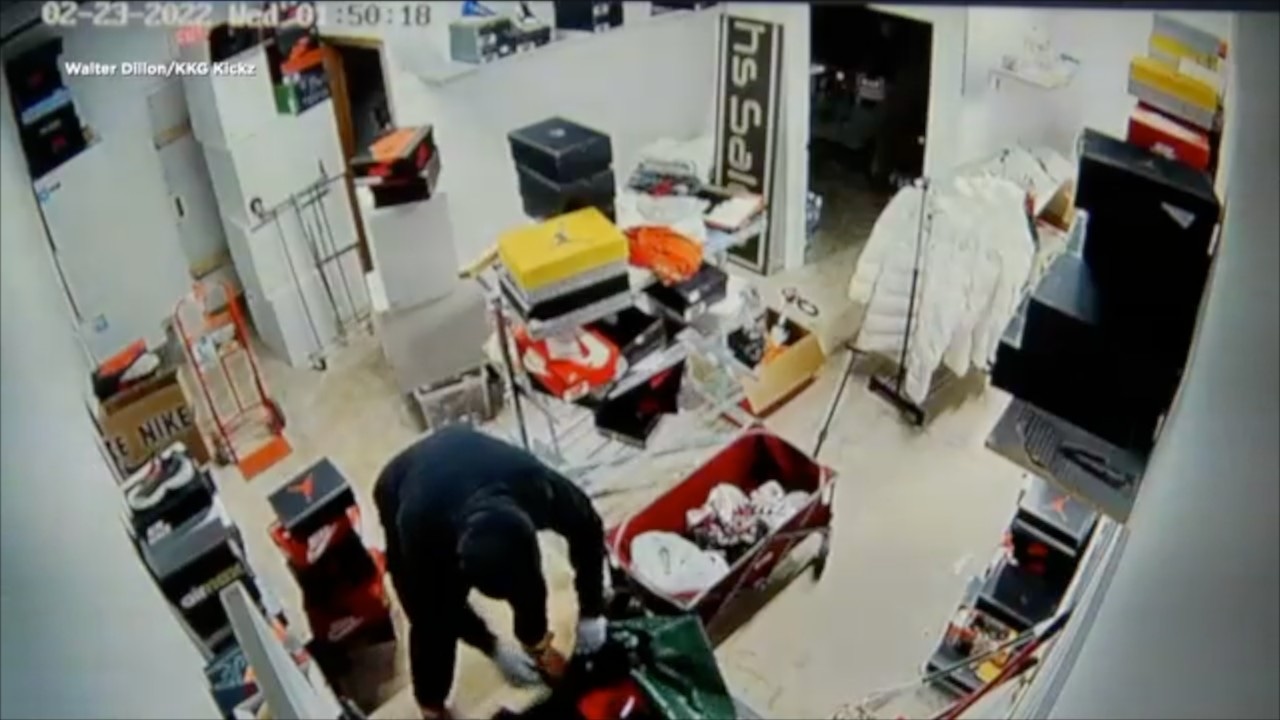 “I don’t even believe what’s on the TV screen when I see it. It’s devastating,” Dillon said. “It’s so awful to see something that I worked for, worked really hard for, dreamed about, executed — to see it all blow away like that is heartbreaking.”

Days later, the front door is covered with plywood.

A jimmied-open backdoor is now reinforced with bolted-on two-by-fours, but $13,000 worth of athletic footwear is gone.

“I was drained, I was mentally drained,” Dillon said. “This is the fifth time this has happened, within like a six-month span.”

“I was so excited, she was getting ready to deliver,” he recalls. “We was cheering her on, holding her hands and things like that, and I got a call from (the security company).”

Dillon’s wife, Shekinah, was about to have their baby boy, Wesley.

“I kind of realized what was going on, and I showed my wife as she was giving birth,” he says. “And my wife, she shook her head and said, ‘go take care of it. We’ll be all right.’

“Just not to be there to cut the umbilical cord or hear his first cry as I was driving down to the shop, that was also heartbreaking,” Dillon adds.

It turns out, his shop wasn’t the only one hit.

The bubble tea shop next door also had some unwelcome visitors almost exactly one month ago.

“I received a call early in the morning, it was four am, and it was a trigger with our alarm,” owner Siry Yang remembers. “(Dillon) shared a video with us, and you can see the men looked similar. They were all fully covered up, so you can’t see their faces, but they looked similar in the videos.”

Yang says the men, who broke in through a back entrance, looked around and left without taking anything — except a sense of security.

“It does scare us a lot,” Yang said. “Because we, you know, during the night I’m leaving by myself and I do worry about safety, so we want to make sure everyone else is safe too, not just ourselves.”

Dillon showed us numerous surveillance cameras inside and outside his business.

He says he’s lost a total of $30,000 worth of merchandise, including 250 left-foot sneakers and 20 complete pairs.

Dillon adds he considering donating the footwear stored in a backroom that the thieves didn’t get.

But for now, he’s shuttering the store with the idea of perhaps reopening at another location in the future.

Meanwhile, the Ramsey County Sheriff’s Office says it’s investigating and checking to see if there are other similar cases elsewhere in the metro.

Dillon says his store was a gathering place for sneaker fans and wants the thieves to know one thing.

“I don’t know how you could live with yourself. You shattered a dream when you threw that brick through the glass and broke in,” he said. “If there was a problem, you could’ve come into the shop and we could have worked together. You could have hung out with us. You didn’t have to take from us like that.”