Confrontations between police and protesters this week in Brooklyn Center have raised new concerns about using less-lethal weapons as a crowd-control tactic.

University of Minnesota doctors and medical students joined community leaders Saturday to bring attention to the use of devices such as rubber bullets, tear gas and pepper spray. Doctors say these tools can be lethal and cause skull fractures, eye injuries, traumatic brain injuries and skin burns.

A study by U of M researchers published in the New England Journal of Medicine analyzed 89 patients who checked into medical facilities from May 26 to June 15 last year and had suffered injuries related to unrest in the Twin Cities.

Of the 57 patients who reported injuries from projectiles, such as rubber bullets, tear gas canisters and beanbags, 23 were struck in the head, neck or face.The disproportionate level of injuries in this area raised concern from researchers, who cited UN guidelines which state that law enforcement should only aim less-lethal weapons at the extremities and that hits to the head, neck and face are potentially illegal.

Overall, the researchers concluded that projectiles shouldn’t be used as crowd-control measures because of the disproportionate rate of head injuries they cause. 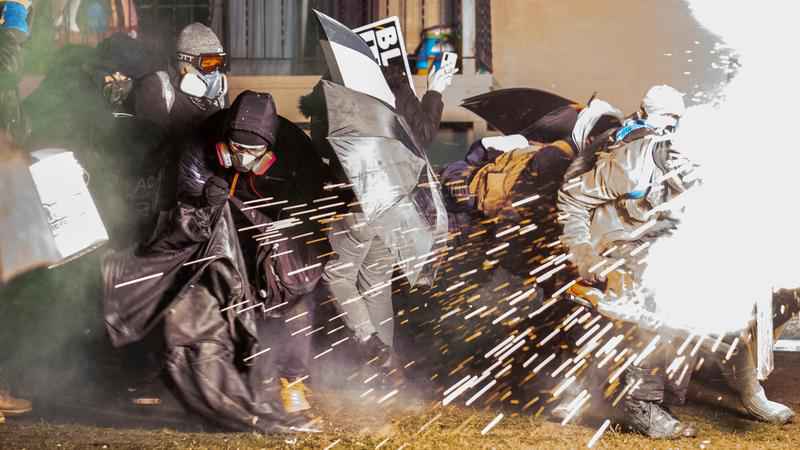 One person who spoke at Saturday’s event said he was shot in the leg and tear-gassed the first night he was out protesting in Brooklyn Center, and then on Tuesday, he was shot in the face with a projectile and suffered a fracture.

Brooklyn Center Mayor Mike Elliott has asked for a moratorium on less-lethal weapons to disperse protesters, and Minneapolis City Council members passed a resolution by a near-unanimous vote Friday to announce their opposition to the use of tear gas.