“Everyone talked too long to put it simply, the lawyers all could’ve been much shorter," University of St. Thomas law professor Rachel Moran said. “From the defense, we got the closest thing to a coherent case theory we’ve heard. Mr. Nelson repeated the phrase ‘reasonable officer’ over and over.”

“From my end, he talked far too long and he focused too much on things that don’t necessarily help him," she said. "He showed a lot of video the jurors have already seen. It’s not necessarily helpful to Derek Chauvin’s case.”

Moran said the state was somewhat effective with its rebuttal. 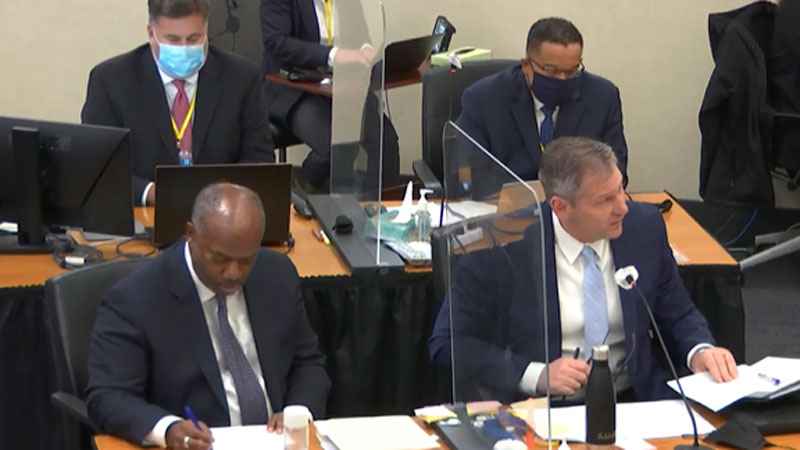 In this image from video, prosecutor Steve Schleicher, front right, accompanied by prosecutor Jerry Blackwell, front left, speaks to the judge before Blackwell gives a rebuttal in closing arguments as Hennepin County Judge Peter Cahill presides Monday, April 19, 2021, in the trial of former Minneapolis police Officer Derek Chauvin, in the May 25, 2020, death of George Floyd at the Hennepin County Courthouse in Minneapolis, Minn.[Court TV via AP, Pool]

Jerry Blackwell told the jury, “You were told, for example, that Mr. Floyd died because his heart was too big. And now having seen all the evidence, you know the truth and the truth of the matter is that the reason George Floyd is dead is because Mr. Chauvin’s heart was too small."

‘The case is in your hands’: Judge sequesters jury in Derek Chauvin trial

It was a moment that will stick with the jury for a long time, according to Moran.

“They were able to be dismissive of some of Mr. Nelson’s arguments,” she said. “It’s always nice to be able to have the last word.”

“For the most serious charge, the second-degree murder charge, the jury has to decide whether Derek Chauvin was actually assaulting George Floyd,” Moran said. “They do have to consider whether his use of force was outside the norm such that it would be considered a crime, the crime of assault. For the two lower charges, the jury has to decide what was the level of his recklessness?”

Moran said it could take hours or days for a verdict on all three charges.

“I think if we don’t have a verdict by probably Wednesday afternoon, that’s when the state would start getting nervous about whether there’s significant enough disagreement that it could result in a hung jury,” said Moran.

Jurors wrapped up at about 8 p.m. on Monday.

If the jury convicts Chauvin, the state is seeking higher sentencing due to a number of factors, including that Floyd was in a vulnerable position and there were children on the scene.

On Monday, Chauvin waived his right to have a jury decide that sentence. Judge Peter Cahill will make the determination instead.

“I suspect that his decision and his lawyer’s decision was based on the fact if the jury convicts, they’ve essentially already made those findings because they were already presented in the trial so they would have very little likelihood getting the jury to disagree with those facts,” said Moran. “The reality is this may be more about efficiency than anything else. Sometimes you just get to a point where there’s such a simple uncontested fact that you don’t bother going through the more complicated process.”