“I just remember hearing just like the boom, the bang of the gun then I remember just looking up and seeing another car just coming towards us,” said Alayna Albrecht-Payton, who was in the car with Wright.

As the first witness of the day, she told jurors that she tried to stop his bleeding in the aftermath of the shooting.

“I was the only one, out of everybody there, who was trying to help him,” she said tearfully. “I grabbed whatever was in the car […] I just grabbed whatever it was and I put in on his chest, like how you see in the movies and in TV shows. I didn’t know what to do. I just put my hands over his chest and tried to hold it in.”

Legal analyst Jack Rice, who is a criminal defense attorney in St. Paul, told 5 EYEWITNESS NEWS her testimony is part of the state’s strategy. 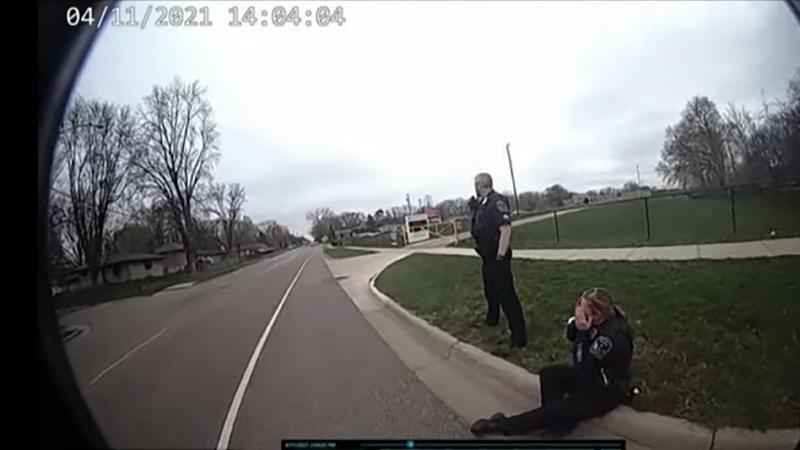 In this image taken from police video played during the trial of former Brooklyn Center police Officer Kim Potter on Wednesday, Dec. 8, 2021, in Minneapolis, Potters, right, is seen after the traffic stop of Daunte Wright on the April 11, 2021. Potter, who is white, is charged with first- and second-degree manslaughter in the shooting of Wright, a Black motorist, in the suburb of Brooklyn Center. Potter has said she meant to use her Taser – but grabbed her handgun instead – after Wright tried to drive away as officers were trying to arrest him.[Court TV, via AP, Pool]

"What they’re really still doing here is they’re trying to humanize this young man because if they can do that, that’s going to attach to how the jury sees him,” said Rice.

The state also called two Brooklyn Center police officers and a Champlin officer to the stand. Prosecutors questioned the three officers about their response to the scene after the crash.

“How about Officer Potter specifically?” said Joshua Larson, who is part of Attorney General Keith Ellison’s team. “Do you remember her reporting anything to you over the radio about the condition of anyone in that book?”

Larson followed up with, “Were you surprised that you didn’t receive any information from anyone at the traffic stop?” And Salvosa said, “I was confused.”

State prosecutors painted a picture of chaos as additional law enforcement arrived at the crash scene.

“There were a lot of unknowns at that time,” said Officer Jeff Sommers.

“What the state is trying to argue is she didn’t care, right?” said Rice. “The problem with that argument is we also saw a video of Kim Potter lying on the ground, just inconsolable crying, weeping realizing what she had done.”

He explained Thursday’s testimony will be one piece the state revisits during closing arguments.

“What the state is going to argue at closing is that all of these horrible things that took place, they took place because of Kim Potter’s failure,” said Rice. “They’re trying to say it wasn’t just the death of Daunte, it was also everything that came afterward — that’s her fault, too.”

Rice told 5 EYEWITNESS NEWS the state was also trying to create a contrast between Potter and her fellow officers.

“A contrast between their competency, their capability, and Kim Potter’s lack of both,” he said.

The defense team chose not to cross-examine all of the witnesses.

Earl Gray and Paul Engh questioned only two of the officers but used both to further their argument that Wright was responsible for the crash. Wright was driving a white vehicle on April 11.

The attorneys also emphasized the life-saving attempts by law enforcement, and the difficulty officers had seeing into Wright’s vehicle immediately after the crash.

“One of the things I expected from the defense and the cross-examination was to go after these officers a bit more,” he said. “What I mean is to go after them about how dangerous Brooklyn Center is, how many weapons they see there, how dangerous traffic stops are […] You tell that officer [on the stand], ‘This is a concern, all of those issues change how dangerous this will be.’”

After the jury left for the day, the defense requested a mistrial citing concerns that Thursday’s testimony didn’t focus enough on Potter or proving the two charges she faces. Judge Chu denied the motion.

According to Rice, there weren’t grounds for a mistrial.

“This is something they’re always going to be watching for,” said Rice. “You’re doing this partially for appeal so just in the event that something fails, you want to be able to come at the end of the trial and say, ‘We requested a mistrial two times, three times, five times and when those were denied we simply were unable to get a fair trial’.”

Testimony continues at 10 a.m. on Friday.