A civil suit filed Tuesday in Dakota County District Court claims Vikings star running back Dalvin Cook brutally beat a former girlfriend, pointed a gun at her head and threatened to kill her last year at his home in the east metro.

The court filing presses civil charges of battery, assault and false imprisonment after Cook allegedly beat plaintiff U.S. Army Sgt. Gracelyn Trimble after she showed up at Cook’s home in Inver Grove Heights on Nov. 19 to break up with him and collect her possessions.

Cook’s lawyer, David Valentini, told 5 EYEWITNESS NEWS that his client claims the opposite: Cook is actually the victim of domestic abuse and that the civil suit is an attempt at extorting him and ruining his career.

"I just want everyone to know I am the victim in this situation and the truth and the details about the situation will come out at a further time," Cook told reporters in a news conference Wednesday. 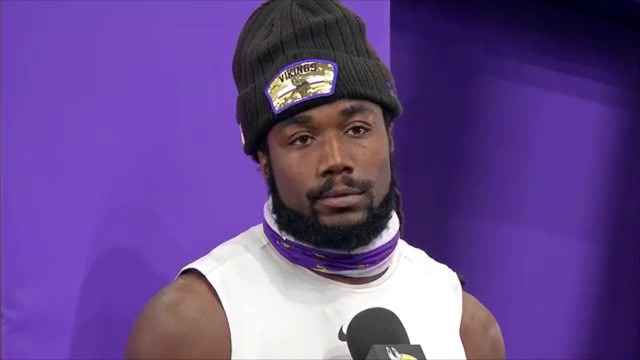 Valentini said Cook believes he acted in self-defense after Trimble broke into his home, maced Cook and two guests and held them at gunpoint for hours.

Neither Cook nor Trimble contacted police at the time, and no criminal charges have been filed.

Warning: Graphic content that may be difficult for some readers continues below.

According to the lawsuit, Trimble and Cook first met in 2018 at a beach in Fort Lauderdale, where Trimble was stationed at the time. Trimble alleges she did not know Cook was a professional athlete. The two eventually developed a relationship, which involved travel between Florida and Minnesota.

The document claims Cook had exhibited a pattern of violent behavior toward Trimble in the months leading up to the Nov. 19 incident.

In March 2020, Trimble and Cook got into an argument because Cook was cheating on her while she suffered a miscarriage with his child, the lawsuit states. During that fight, Cook became "physically violent" and pushed Trimble. They broke up afterward but got back together in May and started living together full-time.

During the time Trimble and Cook lived together in Florida, the lawsuit states, "Trimble became aware of Cook’s aggressive behavior and proclivity towards violence." And during a visit to Minnesota, Cook "threw her to the ground" when the two returned to Cook’s home after getting into an argument at the Mall of America.

On Nov. 18, Trimble saw on Instagram that Cook was at his home in Inver Grove Heights with the same woman he cheated on her with back in March, according to the court filing. After seeing this, she made plans to come up to Minnesota to get her things. She had been in communication with Cook about the Instagram post and had been talking with Cook’s agent, Zac Hiller, to arrange travel but decided to book a flight on her own.

Cook’s past behavior led Trimble to store a can of mace in Cook’s garage, the lawsuit states. So after landing at Minneapolis-St. Paul International Airport the evening of Nov. 19 and taking an Uber to Cook’s home, she entered the residence using a garage door opener and armed herself with the mace.

When she got in the home, Cook was in the living room with his cousin, Johanna Fann, and Fann’s boyfriend. Trimble asked Cook for help gathering her things, but then he "grabbed her arm, and slung her whole body over the couch, slamming her face into the coffee table," the lawsuit states. The impact caused her forehead and the bridge of her nose to break open and bleed.

Trimble tried to spray Cook with the mace during the struggle, but he overpowered her, and she mostly sprayed herself, according to the lawsuit. She ran outside to get away and tried to get the mace out of her eyes but was unsuccessful, so she went back into the house to wash herself off in the shower.

Cook followed her to an upstairs bedroom, where he allegedly slammed her on the floor. The corner of the wall broke her fall, "creating a deep gash in her arm." At that point, Cook then pinned her to the ground and threatened to kill her before punching and choking her. The lawsuit claims he then grabbed a gun and pointed it at her head.

Fann, after hearing the struggle in the bedroom, came upstairs and started to fight Trimble. When Trimble fought back, Cook punched her in the face, the lawsuit states. Eventually, Cook let her go.

When Trimble went back downstairs, she brought the gun with her for self-defense, found her phone and called a family friend to tell him what was going on, the lawsuit states. Cook continued to issue threats after he overheard her conversation.

After Trimble took a shower, the lawsuit claims, she went back downstairs and ripped up pictures of herself and Cook that had been on display in the home but were taken down while the other woman was over. Cook got a broom to clean up but ended up striking Trimble instead. The document states that Cook continued the beatdown, slamming her on the floor and at one point attempting to throw her down the stairs.

"Despite having been a soldier in active combat, where missiles and bullets fired at her, Trimble feared for her life like she had never before," the lawsuit states.

Trimble screamed for help, but the two others in the home did nothing, according to the lawsuit. Cook threw her against the wall, slammed her head into an electrical outlet on the floor, causing her to "bleed profusely." Cook then proceeded to kick her while she was down and told her, "You’re going to die."

Trimble’s lawyer, Daniel Cragg, included photos exhibits of Trimble’s injuries in the court filing. They show cuts on her face, scalp and forearm and blood soaking her hair and a white T-shirt given to her to stop the bleeding.

When Trimble tried to run away and seek help from the neighbors, Cook ran after her, picked her up and brought her back into the house, the lawsuit claims. He wouldn’t let her have her phone or call for help. Eventually, he brought her to the airport.

Trimble claims she was unable to report to work for several days because of her injuries, but she did not seek medical help until Nov. 25, almost a week after the alleged beating, the suit says. In the emergency room, she said she was in an ATV accident. She was diagnosed with a concussion.

Cook continued communicating with Trimble after the alleged attack, the lawsuit states. A screenshot of a text conversation included in the court filing shows an exchange in which Cook apologized and said he would "take my punishment" if Trimble went to the police.

According to the lawsuit, Trimble did not go to the police or disclose the true nature of her injuries because her "first instinct was to protect her abuser out of a misplaced feeling of love."

Vikings coach Mike Zimmer told reporters Wednesday that Cook is practicing with the team and that he is expected to play on Sunday.

The Vikings organization said it has contacted the NFL about the incident. No action has been taken against Cook by the league.