Damage is being reported and arrests were made as unrest continued for a second night after the shooting death of 20-year-old Daunte Wright during a traffic stop in Brooklyn Center.

Wright was shot and killed by a Brooklyn Center police officer Sunday. The Minnesota Bureau of Criminal Apprehension identified the officer involved as Kim Potter. 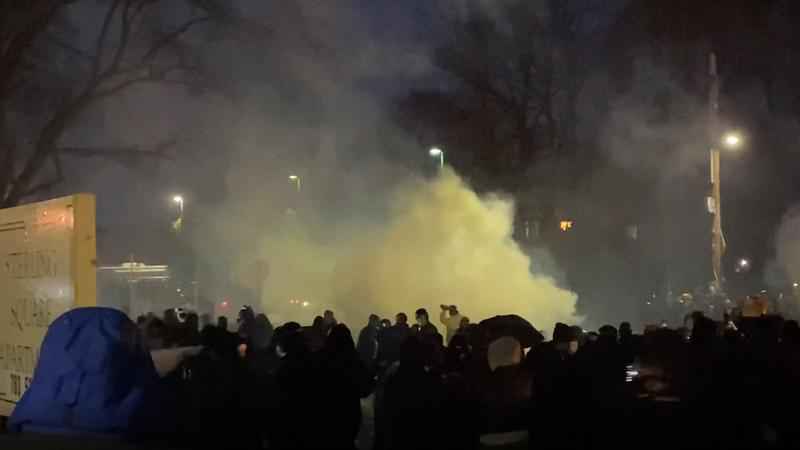 Meanwhile, a KSTP crew reported seeing some damage, including damage to a Dollar Tree in Brooklyn Center.

We are live outside of Dollar Tree in Brooklyn Center.

Officials say about 40 people were arrested overnight in the Twin Cities. @KSTP pic.twitter.com/GfZlvkLzy6

In Minneapolis, there were reports of burglaries at five businesses.

Law enforcement officials with Operation Safety Net report about 40 arrests were made in the Twin Cities as protests broke out over the shooting death of 20-year-old Daunte Wright.

Wright was shot and killed by a Brooklyn Center police officer Sunday.

"We just want to say thank you for all the people who came out and exercised their First Amendment right in a peaceful manner," Minnesota Department of Public Safety Assistant Commissioner Booker Hodges said during a press conference Tuesday morning. "Unfortunately, there were those who decided not to do that and the plans we put in place over the last few months were executed."

He added, "For months we’ve been saying riotous behavior is just not going to be tolerated, and unfortunately tonight, that is some of the things we encountered."

According to Col. Matt Langer with the Minnesota State Patrol, the arrests vary from curfew violations to rioting.

According to Langer, some of the officers were hit with objects thrown by protesters.

Officers at the Brooklyn Center Police Department did deploy chemical irritants and flashbangs to disperse protesters.

The law enforcement officials did report some instances of looting both in Brooklyn Center and Minneapolis.

According to Minneapolis Police Department Deputy Chief Amelia Huffman, there were a total of five burglaries at Minneapolis businesses.

Police have cleared the area near the Brooklyn Center Police Department after demonstrators protesting the death of Daunte Wright clashed with police, according to KSTP crew at the scene.

Earlier in the evening, police deployed chemical irritants to disperse the crowds.

A KSTP reporter at the police department said protesters that were arrested during the unrest have been brought back to the department building.

Another KSTP reporter down the street from the police department said looting had occurred at a Dollar Tree.

The reporter said smoke was seen coming from the Dollar Tree, however, firefighters were able to respond.

Authorities are arresting protesters gathered at the Brooklyn Center Police Department to protest the shooting death of Daunte Wright.

Law enforcement officers are arresting people who have ignored dispersal orders and are violating curfew in the area near Brooklyn Center Police Department and Humboldt Avenue. Leave the area. #MNOSN #OperationSafetyNet

A Dollar Tree down the street from the police department was also being looted, according to a KSTP crew at the scene.

Demonstrators continue to gather at the Brooklyn Center Police Department to protest the shooting death of Daunte Wright.

A dispersal order was issued earlier in the evening after the 7 p.m. curfew was put in effect.

Monday evening, protesters gathered in Brooklyn Center after the fatal shooting of Daunte Wright by police.

Hundreds gathered outside of the Brooklyn Center Police Department, which has been barricaded and fenced off.

The gathering continued after the 7 p.m. curfew put in place for Hennepin, Ramsey, Anoka and Dakota counties went into effect.

According to a KSTP crew at the scene, a dispersal order was issued those gathering at the police department at about 7:45 p.m.