Along Lake Street in Minneapolis, signs of the times, in spray paint and plywood.

One message sprayed on sheets of particle board reads simply, “Welcome in, we’re open,” and lists hours.

“The trial just ended, hoping things turn back to somewhat normal,” says barbershop owner Jimmy Mills. “Still clawing through the pandemic and pending court dates, you know what I mean. Those things that… the atmosphere is still somewhat uneasy as far as I’m concerned."

Like many in the neighborhood, Mills — owner of J-Klips Barber and Beauty Shop — has been doing a lot of thinking about the Derek Chauvin trial and the guilty verdict handed down earlier this week.

Mills, who’s been in business here for 14 years worries about the future. 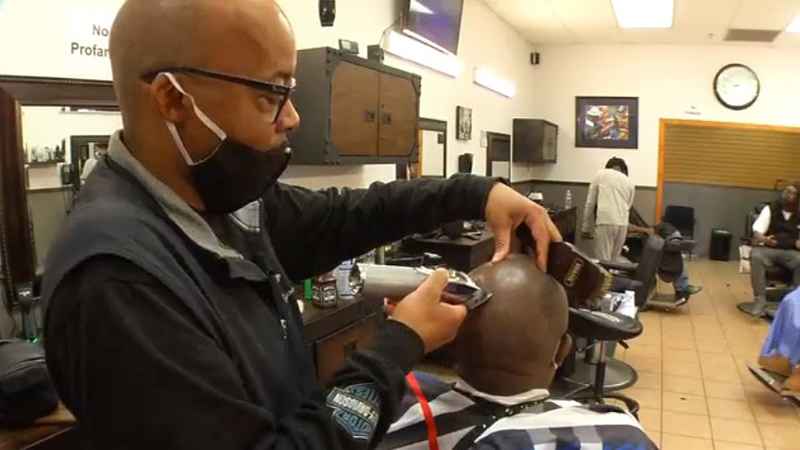 Jimmy Mills, owner of J-Klips Barber and Beauty Shop, gives a haircut Saturday, April 24, 2021, in Minneapolis. His shop, like so many others on Lake Street, are still recovering from the one-two punch of the pandemic and the unrest following George Floyd's death.[KSTP]

"It’s been about a year now since the George Floyd thing,” he says, while snipping a customer’s hair. “We’re approaching a year in May, so some of those businesses ain’t going to make it."

Mills and other Lake Street merchants have seen much this year: the pandemic, the death of George Floyd, the riots that followed, and the Chauvin verdicts.

"It continues from one day to the next, and I don’t think you can let your guard come down,” he said. “The new situation with Daunte Wright — it’s going to be continued tides of unrest, I believe."

Authorities say the destruction from last May’s unrest was extensive. The Minnesota Department of Commerce says the riots caused $550 million in damage.

Nearly a year later, some Lake Street businesses are boarded up or are simply gone. But Mills says he’s staying busy, serving 60 customers on weekdays and around 100 on weekends.

He hopes people will take notice that shops and stores are reopening.

"You’d be surprised how many people take notice of you being in the neighborhood,” he said. “They might not necessarily patronize your business, but they took notice that you’re here and up and operating."

While KSTP was in the neighborhood Saturday, a group of protesters marched by Mills’ front door — a reminder of the continuing fight for social justice. Mills is thinking ahead to Chauvin’s sentencing hearing, which is scheduled for June 16.

"Kind of wondering if the boards are going to come down or if we’re going to need to stow them in the back, put them right back up six weeks from now when it’s time for sentencing,” he said

And he’s grateful for the customers who come to see him and wish him well.

"I’ve seen some progress. I know around here they’ve been rebuilding,” he says. “Like today my door is open to just see people pull up and honk your horn and say, ‘Hey man, it’s good to see you guys on the block open.’ So I’m blessed. I thank God for that.”