For toy store owner Amy Saldanha, this is crunch time.

“This is kind of the week that we plan for all year,” she says. “Certainly a lot of people shopped early this year, but the last week of the holiday season, everybody is just crushing and trying to get toys this year.”

A year complicated by the pandemic and a supply chain slowdown.

"Definitely, like shipping and stuff is taking a lot longer,” notes Melissa Larson, from Chanhassen. “This year, going to a mall has been like a brand new experience all over again.”

Larson, visiting Saldanha’s Kiddywampus store in Chanhassen, says last year, she did all of her holiday shopping online. 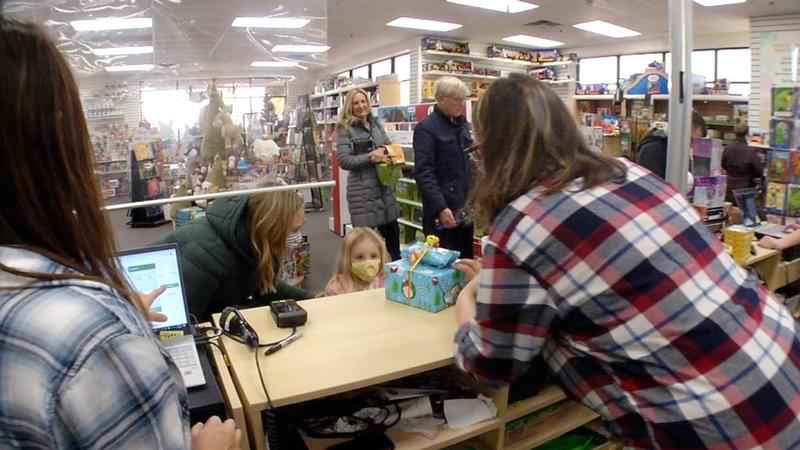 This year, she and her husband Brandon brought their 3-year-old twin boys Jack and Henrick along for some in-person shopping.

"We’re letting the boys pick out some of their new toys for Christmas,” he explained. “This is their first try on that.”

“I think we’ve been trying to spend more money in town this year, and support local shops and whatnot, to try to make sure we have access to them,” Larson adds.

The National Retail Federation says nationwide, holiday consumers are expected to spend nearly $998 million on holiday purchases this season — and that 148 million shoppers are searching online and in-store this last Saturday before Christmas.

For retailers like Saldanha, all of this adds up to a perfect shopping storm.

"I’ve heard so many stories of customers coming in, saying I ordered it online and it’s now saying March, or February, or January,” she says. “So people want to put their hands on it.”

But shipping delays mean holiday shoppers like Lisa Quale and her kids are also toy detectives.

"I ordered a few things online, but I did struggle with a lot of things as well,” she says. “It’s very hard to find like particular items, so it’s having to look in multiple places rather than just in one spot."

Saldanha says 95% of her inventory comes from China, even as shipping costs are up 500%.

She says more toy makers are trying airfreight — and that about 5% of the toys she sells arrive by air.

“I was hoping by January, things would be caught up. That’s absolutely not the case,” Saldanha notes. “What I’m hearing from most manufacturers is that it’s going to take at least six more months to catch up.”

She says that finding a specific toy right now might be a challenge — but that there are choices out there.

“This is the year for people who have a little flexibility, right? If you want to introduce your child to a new toy, if you’re flexible on what you’re looking for, we have tons of options,” Saldanha says. "If you’re really set on a particular toy, this is a rough year for you, because some things are really hard to find."