Seven witnesses testified during the fourth day of the trial of former Brooklyn Center Officer Kimberly Potter. The state focused on Daunte Wright’s injuries, forensic evidence collected at the crash scene, and the differences between Potter’s Taser and handgun.

University of Saint Thomas School of Law Associate Professor Rachel Moran explained many of the witnesses were called to lay the groundwork that Wright was killed and that the investigation into his death was handled properly.

“There were a few things that stood out,” said Moran. “One was the medical examiner’s testimony that Mr. Wright could have died almost immediately, or potentially within seconds, which the state is using to contradict the defense and the issue that came up last week suggesting that Daunte Wright intentionally drove away from the scene.”

During his testimony, Dr. Lorren Jackson told the jury that Wright’s gunshot wound was not a survivable injury. 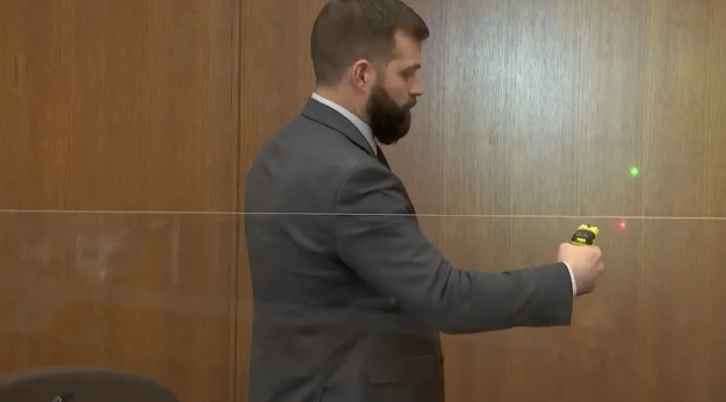 Demonstrating the LED lights of a taser[KSTP]

“Injuries like this we refer to survival times in terms of seconds to minutes in these types of injuries,” said Dr. Jackson.

The defense used its opportunity for cross examination to follow-up on that point.

Attorney Earl Gray, asked, “He could’ve driven off like that and been alive for up to a minute, fair statement?” and Dr. Jackson responded, “I would say that’s possible.”

The state used its witnesses to emphasize the differences between Potter’s firearm and her Taser. During the testimony of Senior Special Agent Sam McGinnis, the jury learned Potter wore her gun on her dominant, right side. She wore her Taser on her left side and would’ve used her non-dominant hand to pull it from its holster.

“The Glock trigger is curved, the Taser trigger is flat with some serrations cut into it,” explained McGinnis. “The Taser has an external on and off switch or safety, the Glock does not.”

Prosecutor Joshua Larson asked McGinnis to turn on a Taser 7, the model Potter carried, and show the jury the flashlight and lasers that appear.

“Are there any lasers, or LED lights, on the firearm?” asked Larson. McGinnis replied, “There is not.”

Moran explained, “The agent’s testimony about the distinctions between a Taser and a gun, the state is using that to show that this was not a reasonable mistake that any officer would have made. And in fact, that it was completely unreasonable for this mistake to happen and that it required Kim Potter to have been acting reckless in some way. […] I think the state is trying to use that to say this is beyond the pale of what any officer could have accidentally done or could have reasonably made a mistake about.”

Testimony was stop and go throughout the day as the defense voiced frequent objections.

“I think the defense strategy is to just openly disagree with virtually everything that prosecutors are doing,” said Moran. “Some of the objections are absolutely legitimate and Judge Chu is sustaining a lot of them, meaning that she agrees with one side or the other about the inappropriateness of a question or a particular testimony. She’s also overruling a lot, which means that she thinks there are too many objections.”

Moran, who is a former defense attorney, explained making frequent objections can be a risky strategy.