A chaotic end to the Fourth of July holiday weekend in Minneapolis has city leaders and residents calling for order.

Meanwhile, downtown Minneapolis was a scene of chaos throughout the evening, with fireworks being launched from cars, endangering pedestrians and drivers in the vicinity.

Interim Police Chief Amelia Huffman said the city received over 1,300 911 calls from 9 p.m. to 4 a.m., noting Minneapolis typically fields that many emergency calls in an entire day. She said some officers had fireworks aimed at them while responding to various complaints.

Huffman told reporters on Tuesday that the latest HR data from June 18 shows the department has 564 active officers. It’s well below MPD’s authorized strength of 888 sworn officers, according to a city spokesperson. A recent court decision requires the city to have at least 731 officers. 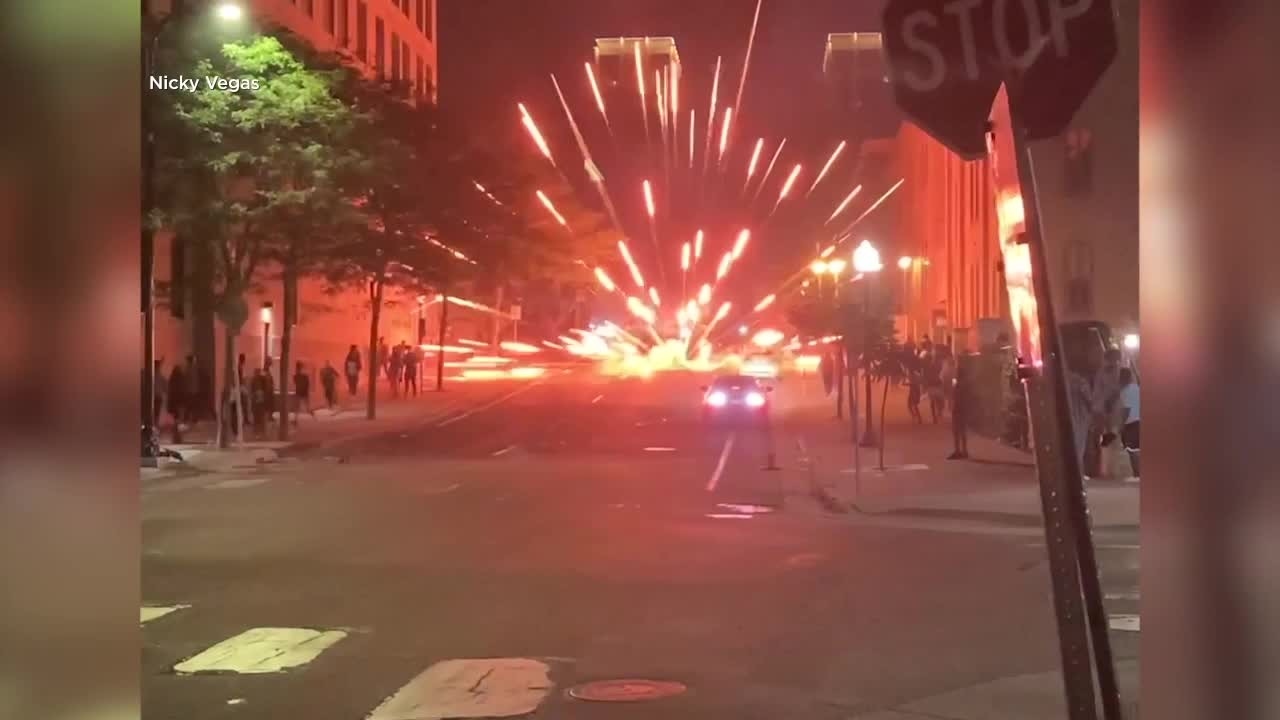 Fireworks explode in the middle of the street on Monday, July 4, 2022, in downtown Minneapolis. (Courtesy of Nicky Vegas)

“People — whether they’re doing shootings or blasting off fireworks in a residential area — they need to be held accountable too,” Minneapolis Mayor Jacob Frey said in a news conference.

“This kind of garbage cannot be tolerated in any city, and it’s our job to make sure it doesn’t take place here in Minneapolis,” the mayor added.

Minneapolis Park Police and Minneapolis Police responded to a report of a shooting on Boom Island around 11:30 p.m. Monday evening.

A large group that had gathered on Boom Island dispersed after the gunshots were fired. Minneapolis Park Police say a majority of shooting victims were transported to the hospital on their own. Hospital officials notified police about the shooting victims.

Minneapolis Park Police noted there were no formal Fourth of July events scheduled at Boom Island. No arrests have been made.

Fireworks and chaos around downtown Minneapolis

One person told 5 EYEWITNESS NEWS the scene in the north loop of Minneapolis made him feel like he was “in a movie.”

“I could hear this noise, and I thought, ‘They don’t have fireworks today down by the river.’ It was a whole ‘nother world,” said Nicky Vegas. “Like, it was not what I was expecting, and as I got closer and closer to the fireworks, I would get braver and braver, but I was still nerve-wracked.”

Vegas said he believed police handled the situation to the best of their ability. He witnessed the scene while driving home from a fireworks show and said he was confused because Minneapolis had canceled its display this year.

Vegas provided 5 EYEWITNESS NEWS with screenshots from videos he filmed of the scene.

He said that as he approached the scene, a spark from a firework burned his leg.

“People were throwing fireworks at other people, cars that were in the middle of the street,” said Aleksey Silenko, who witnessed the scene unfold from his apartment balcony.

Silenko told 5 EYEWITNESS NEWS fireworks were being shot at his building. He also described it as being like “something out of the movies.”

“It’s just mayhem there, a free-for-all. Anybody can do anything,” Silenko said. “Even last night, with everything happening down there, I saw the police came out with a bunch of squad cars, but they left 10-15 minutes later, and they weren’t around, and everything continued the way it was happening.

“It was really rough,” he said. “It lasted for about four hours and it was right outside my apartment, so it was very loud.”