The Wild hosted the St. Louis Blues in the NHL’s first Winter Classic in Minnesota.

The league says the game — a sellout — was also the coldest in NHL history.

“First of all, it’s hockey, it’s Minnesota, that’s why we’re here,” smiled Kris Swarthout, from Minneapolis. “It’s like when you go to Lambeau Field, nobody wears sleeves. Why? Because you’re tough. That’s who we are.”

Facing below-zero temperatures, fans were settling in with blankets, heavy coats, and other winter garb, while bundling up in the stands. 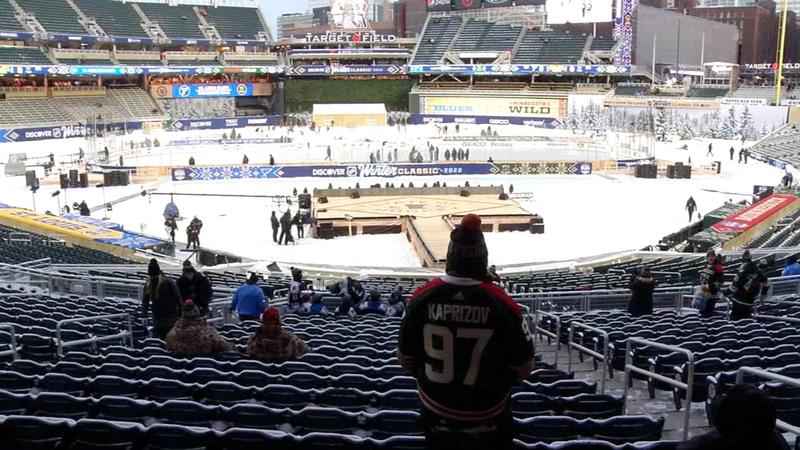 “Just getting out here in the elements, and seeing everybody and everybody’s upbeat and positive,” exclaimed Jason Knapp, from Woodbury. “I’m layered. I’ve learned 52 years old, living in Minnesota, you learn to layer. Hand warmers, foot warmers, the whole thing.”

Brooke and Branden Watts traveled from Nashville to support the Blues.

"It’s a little chilly, yeah,” she said. “We are not used to this weather down where we are in Tennessee. Getting thunderstorms right now in Tennessee."

Snow-covered seats were also quickly filled with Wild fans from all over, including Chris Samentello from Rochester.

That is — Rochester, New York.

“When I saw it was going to be like negative 20… it’s a little cold, but not too bad right now,” Samentello noted.

Cold or no cold, he says he was excited to see the Wild for the first time in person, something he’d thought about since discovering the team as a child playing video games.

"When I was real little I played on NHL probably 15 years ago,” Samentello recalls. “Got them randomly, won with them, and they’ve been my team ever since."

After hours and hours of preparation, Target Field was transformed into an outdoor hockey arena.

For most Minnesotans, the cold weather was just a state of mind.

"If it was warm, it wouldn’t make it,” Swarthout grins. “But I think Minnesota is unique because the cold helps to keep the riff-raff out. That’s good."

The weather was cold enough that NHL crews had to use in-line heaters and insulated tarps to keep the rink’s surface temperature at between 22-24 degrees — optimal playing conditions.

There were other, maybe not as serious issues.

"Beer froze before I even got down the stairs here,” Swarthout laughed.

Then, perhaps the size of the crowd, and some hot booyah could do the trick.

"We’ve had excitement all day, and I’m sure we’ll have adrenaline during the game to keep warm,” Brendan Watts said. “I’m sure the players will too."

Yes — there was game security, complete with metal detectors. And masking and distancing here and there.

But there was also great hockey to ring in the New Year.

"You’re going to want to be masked up, as cold as it is, to have that going on,” Knapp says. “All the negativity in the world we have with COVID and everything. This is nice that they didn’t cancel this event.”