Many people in Minneapolis took to the streets to celebrate and express their emotions Tuesday after former police officer Derek Chauvin was found guilty of murder and manslaughter in the death of George Floyd.

Hundreds gathered both downtown at the Hennepin County Government Center and at 38th Street and Chicago Avenue, also known as George Floyd Square.

KSTP reporters who were at both locations said the crowds erupted in cheers when the verdict was announced.

"It was very powerful," one woman at the Hennepin County Government Center said. "We came here with a lot of doubts … and when they read the verdict, it was hard to believe. It actually happened. We actually got justice."

At George Floyd Square, many shared hugs and shed tears as the news broke. 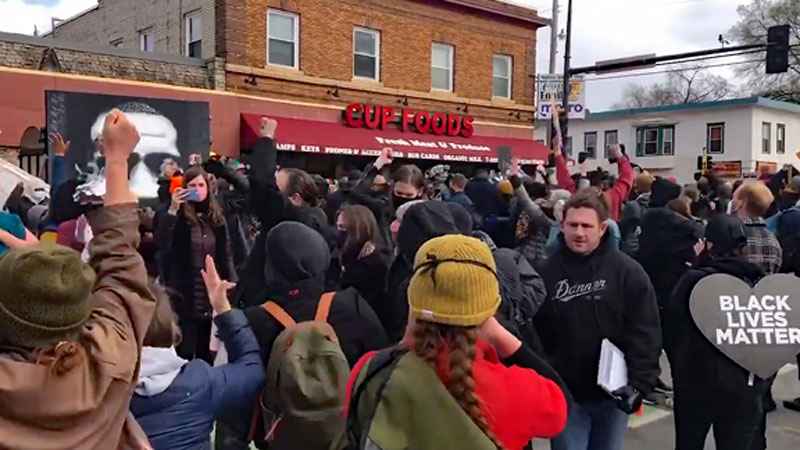 Community members celebrate in George Floyd Square after Derek Chauvin was found guilty of murder and manslaughter in the death of George Floyd. [KSTP]

One local man said he was "elated" by the news.

"We are very, very excited and happy. And we’re looking forward to seeing our city progress through these dark times," he said.

He later added, "We need justice in every case, not just this case alone."

An 11-year-old girl spoke to KSTP’s Ben Henry about how hard the last year has been as the community reacted to Floyd’s death.

After the past 11 months, she said she was happy with the jury’s decision.

"I am really, really happy and I think this is really good and a really big step. What happened over here is not cool and OK, and it’s really good he’s guilty."

In downtown Minneapolis, hundreds gathered to march around the courthouse. A KSTP reporter at the scene noted that many people came with family to wait out the verdict and to celebrate.

One woman who was at the government center said the moments prior to the verdict being read were full of anxiety.

"It was tough because it was based on a lot of common sense," she said. "You seen a man die in front of your face, and it couldn’t have went any other way. I’m glad it went the way that it should have. I was just emotional, hugging everybody, crying with everybody. I’m glad it happened. I’m glad justice was served."