The Bloomington Police Department is investigating a death on Monday.

On the scene of a death investigation at an apartment complex in Bloomington@BPD_MN: “very unusual & extremely disturbing”

They confirm a body was found in a dumpster this morning

911 caller reported seeing a man bringing a body toward the dumpster this am@KSTP pic.twitter.com/VSTvPDxNkR

When officers responded, they tried to stop a 24-year-old man, who fled in a vehicle.

Another officer then learned the 23-year-old woman was dead and a child was possibly in the suspect’s vehicle, Hartley said. He added that investigators believe the woman and the suspect had a domestic relationship, although it’s unclear what kind of relationship at this time.

Eventually, the pursuit of the suspect ended at 46th Street and Nicollet Avenue in Minneapolis. At that time, the man was then taken into custody and a child that’s believed to be under 1-year-old was also found in the vehicle.

The man is being held on probable cause second-degree homicide on Tuesday. 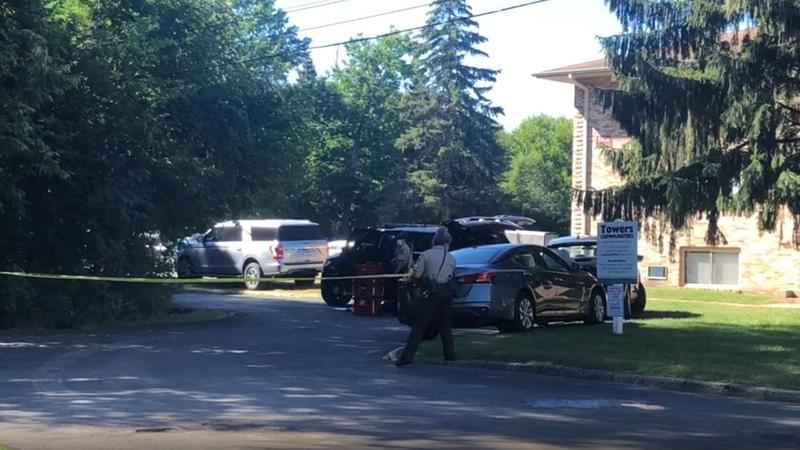 According to Hartley, the child was evaluated and was released to Child Protection Services. The suspect was taken to a hospital for treatment of minor injuries before being transferred to jail.

An officer pursued the suspect into South Mpls

We were on scene & saw a car wedged between 2 squad cars@BPD_MN says suspect taken into custody within 15 minutes of initial 911 call@KSTP pic.twitter.com/e5AeMlgCZ5

Hartley noted the woman had recently moved to Minnesota. Her name and cause of death will be released after the notification of family members.

"Specifically, in this case, any woman who is battered and being abused in a domestic relationship or any relationship that there are resources out there,” said Mike Hartley, interim chief at Bloomington Police Department.

The Minneapolis Police Department told 5 EYEWITNESS NEWS it is assisting in the Bloomington investigation. The Richfield and Edina police departments, as well as the Minnesota State Patrol, also assisted at the scenes Monday.

Police said there is no threat to the public.