Incoming Minnesota Rep. Walter Hudson has a background in conservative talk radio, including a show called “Closing Argument with Walter Hudson.” It turns out his opening argument as a state lawmaker is creating more buzz than any of his radio shows.

During a meeting on Sunday conducted by the group Mask Off MN, Hudson compared medical professionals and others who recommend the COVID-19 vaccine to plantation owners who “enslaved Black people.”

“The plantation owner who said, ‘I need cotton and you’re going to pick it,’ is morally equivalent to the person today who says, ‘I don’t want to get sick, so you have to take the jab,’” he said.

Just to make sure he wasn’t misunderstood, Hudson repeated what he just said.

“And I want to be clear … that I mean exactly what I just said. OK? It’s not a gaffe. I mean it,” Hudson said. “You are the equivalent to a plantation owner who enslaved Black people and forced them to work for you if you today, as a medical professional or just a member of the populace, demand that your neighbor take a vaccination to keep you safe.” 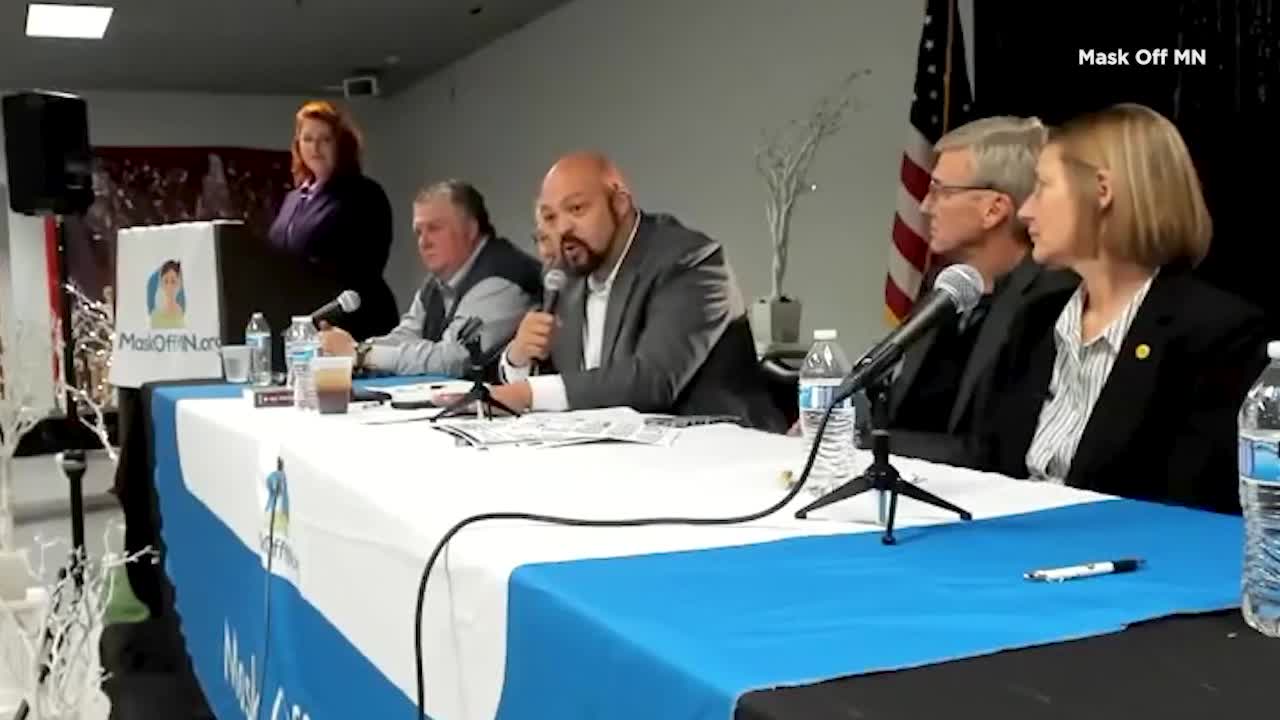 Rep.-elect Walter Hudson, R-Albertville, center, speaks during an event hosted by Mask Off MN on Sunday, Dec. 11, 2022. (Mask Off MN via Facebook)

Hudson, who describes himself on his campaign website as the son of a Black father and white mother, made the comments while sitting next to former GOP gubernatorial candidate Dr. Scott Jensen, who spurred controversy during his campaign for comparing Minnesota’s COVID response to what the Nazis did in the 1930s.

In an appearance on “The Chad Hartman Show” on WCCO Radio on Monday, Hudson didn’t back away from his comments. “This is 100% what I believe,” he said. “Absolutely. To the core.”

Hudson declined an interview with 5 EYEWITNESS NEWS on Tuesday via text.

“I appreciate the opportunity to explore the topic further,” he wrote. “As we begin the legislative session, I have no doubt there will be a more constructive context for continuing the discussion. For the moment, I think it best to let my comments stand.”

When asked to expand on what he meant by his comments and whether GOP House leaders had talked to him about his comments, he texted: “No one owns anyone else, and therefore cannot dictate what they do with their body. Pretty simple. Other members, including house leadership, can speak for themselves.”

In light of that comment, it should be noted that on Hudson’s campaign website he says a woman’s right to abortion should be “abolished.”

We asked incoming GOP House Minority Leader Lisa Demuth for her reaction. She declined to comment. Demuth is the first woman of color to lead the House GOP caucus.

“These comments are abhorrent but unfortunately not surprising,” Martin tweeted. “The MNGOP and GOP continue to double down on crazy conspiracy theories, misinformation, and in this case fabricated false-equivalencies. They clearly did not learn their lesson from the 2022 elections.”