There was sledding, presents and balloons at Grace Caduff’s pandemic-safe birthday party.

Little Grace was to turn 3 years old on Jan. 4, but her parents decided to throw a socially-distanced outdoor party the day before, outside their Rosemount home.

"We had actually planned a drive-by, like a car parade for the relatives," Caduff said.

But then, Nikita Gindorff showed up. 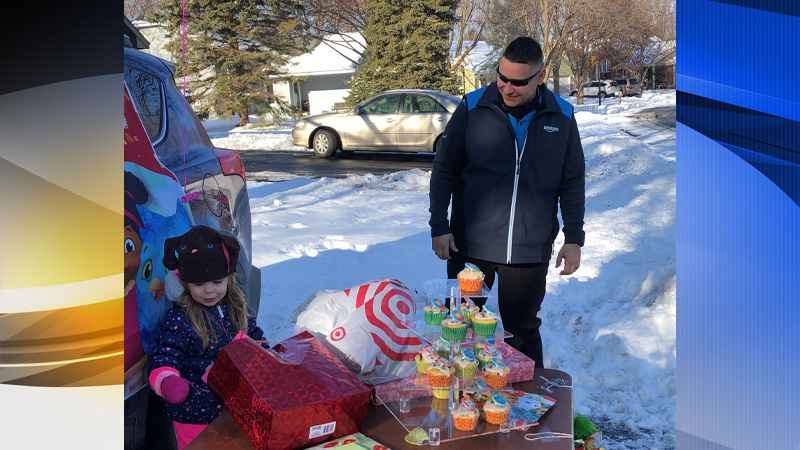 "I had a package for the house next door," he remembered. "I look over and there’s this little girl sitting at the table, and there’s some cupcakes and a sign that says ‘happy birthday.’"

When he’s not on duty with the National Guard or hanging out with his fiancée, Danielle Thompson, Gindorff makes deliveries for Amazon.

"He always likes to give people more than he can give himself," Thompson said. "He always goes above and beyond for everyone, for me too, with gifts."

On that January day, Gindorff did exactly that.

"He did a U-turn and stopped and waved and just shouted out his window, ‘happy birthday,’" Caduff said. "And I said, ‘Thank you, all the decorations you see were ordered from Amazon,’" she added, laughing.

But after a quick trip, Gindorff came back after picking up a birthday surprise for Grace.

"I wanted to get her something special, just because it’s cold outside and she’s outside for her birthday," he said.

"We sort of thought, that was it," said Ben Caduff, Grace’s father. "He sort of drove in and out of our lives, then 20 minutes later he pulled in again and got out of his truck, and he had a target bag, and he stopped by with a couple of Lego sets for her."

The gifts were apparently a hit.

"We have a picture of her looking at the Legos and she liked it," Wendy said. "Because up to this point, she hadn’t looked at any gifts."

The Caduffs took some photos of Gindorff, and he drove off.

"We offered him a cupcake, he wouldn’t even take a cupcake with him, he just went on his way, and continued his route," Ben said.

They reached out to Amazon, but customer service told them it would be hard to identify the driver since he had not made a delivery to their home.

Several weeks went by, but no sign of the driver in the Caduff’s neighborhood.

"He let us take his picture and I put it on my Facebook page, and we got a lot of positive comments," she said. "People were just blown away. It was like, what are you doing? Are you kidding me? Never seen anything like this."

She even contacted KSTP, hoping we could help.

After a story was posted online, the pieces of it began falling into place.

"It’s a small world after all," Ben smiled. "We wouldn’t have been able to find him. It was pretty amazing how quick this worked."

On Thursday morning, a friend tipped Gindorff off about the story posted.

"I got a text from one of my co-workers, and they said, ‘Why are you popping up on the news on my Facebook?’" he said. "So I clicked on the link and I was like, ‘Oh, that is actually me!’ So that was pretty cool."

She said she was not surprised at her fiancé’s kindness — or the fact he hadn’t mentioned anything to her.

"It was shocking because I have not heard this story from him," she grinned. "He probably forgot about it, but I’m like, that’s Nikita. That’s definitely something Nikita would do."

When we met with Gindorff in person, we passed on the Caduffs’ thanks.

"Bless you," was one of the phrases exchanged, Thompson said.

A random act of kindness during these difficult days.

"There’s just a perfect storm of really hard things going on," Wendy said. "And just to do a simple, small, kind human act for somebody really goes a long way."