‘I could hear that baby crying’: Brooklyn Center grandmother jumps into action after spotting stolen car detailed in Amber Alert

For Barb Gusse, a Brooklyn Center grandmother, it was just another chilly February afternoon. But she braved the cold to do something she loves.

“I was out feeding my birds, because it’s so cold,” she said. “You know you have to keep them fed, you know.”

That’s when she glanced across the street to the car lot outside Cross of Glory Lutheran Church, where she saw a white Jeep Grand Cherokee, its engine running.

It sat there for 20 minutes, but Gusse says she couldn’t tell if anyone was inside.

Then an Amber Alert went off on her phone detailing how a Jeep was stolen from Humboldt Avenue in north Minneapolis around 12:17 p.m. and that 1-year-old Da’Merion White was in the back seat. 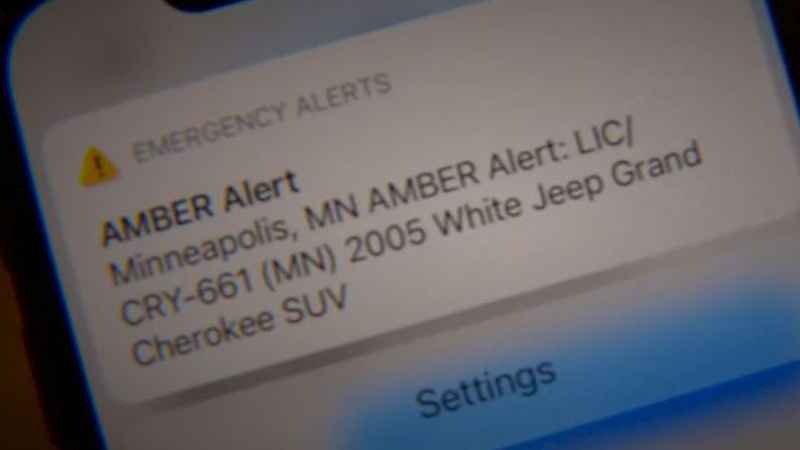 An Amber Alert notification related to the disappearance of Da'Merion White is shown on Saturday, Feb. 6, 2021.[KSTP]

“I’m a bird watcher, so I got my binoculars and I looked over and it was the same license plate that was on the phone,” Gusse said. “So I called the police department right away.”

An arriving officer approached the car and started to open it.

It was a heart-stopping moment.

“The officer tried to open the back door first and it wouldn’t open,” Gusse said. “But the driver’s side door was open, and he opened that door, and then the back door, and I could hear that baby crying.”

But she had to ask. She had to know:

A video posted on Twitter by Safety Alerts MN shows a happy ending at the scene: a group of young women talking with an officer and paramedics in an ambulance.

We believe medical crews were making sure Da’Merion was OK.

“This is a great outcome to what was a terrifying episode,” said John Elder, a spokesperson for the Minneapolis Police Department.

It was the end to an hours-long ordeal that police say began when Da’Merion’s mother took him out to the car, along the 4200 Block of Humboldt Avenue.

"The mother of the child started the car, placed the child inside the car and ran into the residence to grab another item,” Elder said. “Came out and saw the vehicle was gone.”

Police began an urgent search on the ground and in the sky.

They did a grid search and appealed to residents to check their properties, including driveways and alleyways.

The waiting was agonizing.

"This child could be sitting in a car, and we are currently at subzero temperatures,” Elder told reporters.

The Minnesota Bureau of Criminal Apprehension put out that Amber Alert 90 minutes later.

“Oh my God, I would be going nuts, just like those parents did. I called my daughter right away,” Gusse said. “It makes your heart sink. I cried for a while, and I was shaking there for a while.”

More than two hours after he went missing in the back of a stolen car, Da’Merion was safe.

He was transported to the hospital, just to be checked out; a standard procedure.

"About the only things I found out about the child is that he was all smiled when officers picked him up,” Elder said. “He appears to be a pretty good-natured little guy."

The stolen Jeep is being processed for any forensic evidence.

And police say it appears the suspect left the engine running and took off.

Authorities have not released a description, but police say he is still at large.

Gusse is glad she made that call.

“I just thank the lord that I was nosy and I called the cops,” she said. “I’m so glad for the parents. I couldn’t imagine how they felt.”