How the Federal Reserve’s rate hikes affect your finances

The Associated Press and Alex Jokich

The Federal Reserve’s move Wednesday to further tighten credit raised its benchmark interest rate by a sizable 0.75 percentage point for a second straight time. The Fed’s latest hike, its fourth since March, will further magnify borrowing costs for homes, cars and credit cards, though many borrowers may not feel the impact immediately.

The central bank is aggressively raising borrowing costs to try to slow spending, cool the economy and defeat the worst outbreak of inflation in two generations.

The Fed’s actions have ended, for now, an era of ultra-low rates that arose from the 2008-2009 Great Recession to help rescue the economy — and then re-emerged during the brutal pandemic recession, when the Fed slashed its benchmark rate back to near zero.

Chair Jerome Powell hopes that by making borrowing more expensive, the Fed will succeed in slowing demand for homes, cars and other goods and services. Reduced spending could then help bring inflation, most recently measured at a four-decade high of 9.1%, back to the Fed’s 2% target. 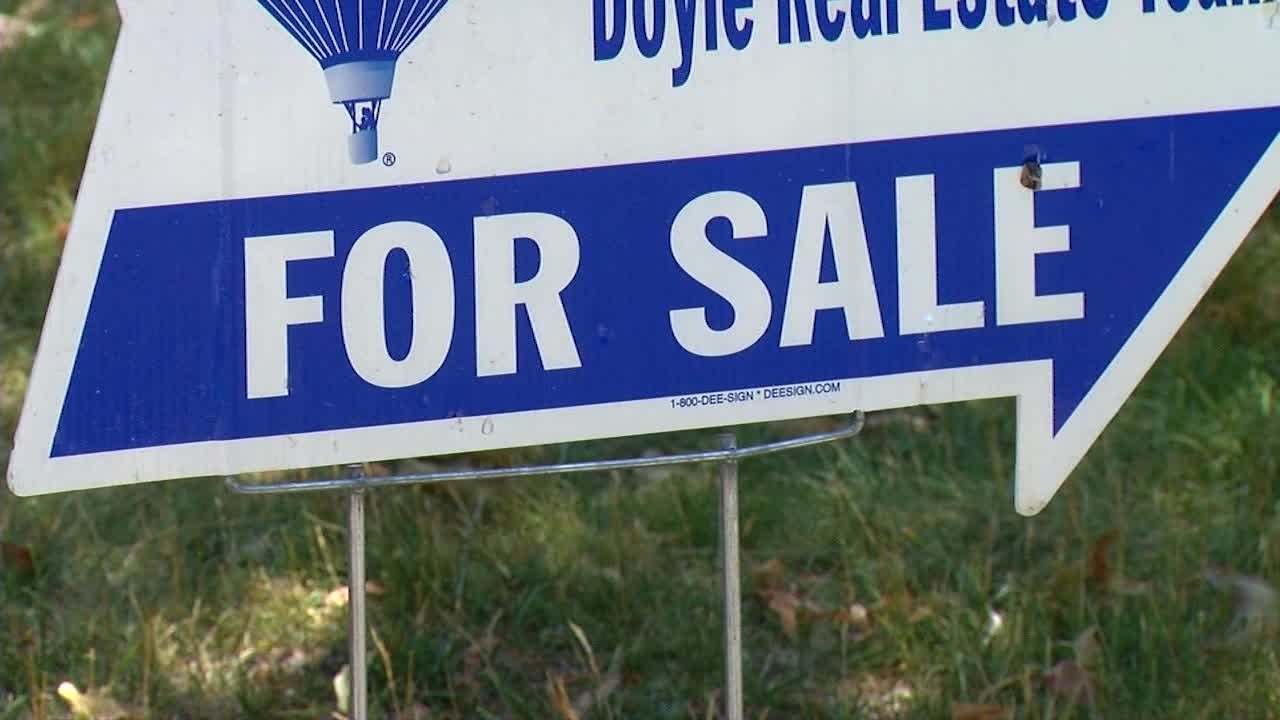 This file photo shows a sign advertising a home for sale. (KSTP/file)

Yet the risks are high. A series of higher rates could tip the U.S. economy into recession. That would mean higher unemployment, rising layoffs and further downward pressure on stock prices.

“The one thing that is kind of interesting is that they are raising interest rates a bit more aggressively than they did initially,” said Agapitos Papagapitos, a professor of economics at the University of St. Thomas.

5 EYEWITNESS News asked Papagapitos how long it may take for inflation to come back down.

“Most people will tell you that the actions of the Fed don’t really show measurable results until maybe nine months, a year down the road,” Papagapitos said. “The Fed is in kind of a difficult spot right now. They’re trying to make sure inflation does not get out of hand but they need to be very careful to watch how things are moving forward, to make sure they are not acting overly aggressively and by doing so perhaps really undermining any kind of strength that may exist in the economy.”

How will it all affect your finances? Here are some of the most common questions being asked about the impact of the rate hike:

Higher interest rates have torpedoed the housing market. Rates on home loans have nearly doubled from a year ago to 5.5%, though they’ve leveled off in recent weeks even as the Fed has signaled that more credit tightening is likely.

That’s because mortgage rates don’t necessarily move in tandem with the Fed’s increases. Sometimes, they even move in the opposite direction. Long-term mortgages tend to track the yield on the 10-year Treasury note, which, in turn, is influenced by a variety of factors. These factors include investors’ expectations for future inflation and global demand for U.S. Treasurys.

Investors expect a recession to hit the U.S. economy later this year or early next year. This would force the Fed to eventually cut its benchmark rate in response. The expectation that the Fed will have to reverse some of its hikes next year has helped reduce the 10-year yield, from 3.5% in mid-June to roughly 2.8%.

WILL IT BE EASIER TO FIND A HOUSE?

Sales of existing homes have dropped for five straight months, while new home sales plunged in June. If you’re financially able to go ahead with a home purchase, you’re likely to have more choices than you did a few months ago.

In many cities, the options are few. But the number of available houses nationwide has started to rise after falling to rock-bottom levels at the end of last year. There are now 1.26 million homes for sale, according to the National Association of Realtors, up 2.4% from a year ago.

“It’s top of mind for most people, especially if you’ve already found a home or are looking for a new home right now. They are really trying to figure out, should I keep looking? What’s going to happen with rates?” said Bob Strandell, a mortgage loan officer at Bell Bank in Minneapolis.

Strandell noted, even though mortgage rates have gone up in the last year, they are still generally low, compared to other points in American history.

“Over the course of the last 30 years, we’ve seen mortgage rates up in the high double digits, between 16 to 18% in the early 80s,” Strandell said. “So over the last two years to see rates quite a bit lower than that, at that rock bottom level in the 3% range in 2020, we were pretty fortunate. But historically speaking, we’re still close to the all-time low of mortgage rates. It’s still a pretty darn favorable rate and, ultimately, I don’t think we’re at a point where we’re going to see those higher double-digit rates anytime soon.”

I NEED A NEW CAR. SHOULD I BUY ONE NOW?

Wednesday’s rate hike won’t likely affect new-vehicle sales much because those buyers are mainly affluent customers who won’t be squeezed by a relatively small uptick in monthly payments, said Jonathan Smoke, chief economist for Cox Automotive. By contrast, he said, used-car buyers with weaker credit who pay higher loan rates could be hurt.

“Many used-vehicle buyers are already acutely feeling the impacts of higher prices for energy, food and rent,” Smoke said.

Used vehicle prices have begun to fall, he noted, and vehicle availability is beginning to return to normal levels.

The full amount of a Fed rate hike doesn’t always pass through to auto loans, according to Bankrate.com. New 60-month loans for new vehicles have risen about a percentage point this year to an average of 4.86%, Bankrate.com says, while a 48-month used-vehicle rate rose just under 1 point to 5.38%.

WHAT WILL HAPPEN TO MY CREDIT CARD?

For users of credit cards, home equity lines of credit and other variable-interest debt, rates would rise by roughly the same amount as the Fed hike, usually within one or two billing cycles. That’s because those rates are based in part on banks’ prime rate, which moves in tandem with the Fed.

Those who don’t qualify for low-rate credit cards might be stuck paying higher interest on their balances. The rates on their cards would rise as the prime rate does.

The Fed’s rate increases have already sent credit card borrowing rates above 20% for the first time in at least four years, according to LendingTree, which has tracked the data since 2018.

HOW WILL THIS AFFECT MY SAVINGS?

You can now earn more on bonds, CDs, and other fixed income investments. And it depends on where your savings, if you have any, are parked.

Savings, certificates of deposit and money market accounts don’t typically track the Fed’s changes. Instead, banks tend to capitalize on a higher-rate environment to try to boost their profits. They do so by imposing higher rates on borrowers, without necessarily offering any juicer rates to savers.

But online banks and others with high-yield savings accounts are often an exception. These accounts are known for aggressively competing for depositors. The only catch is that they typically require significant deposits.

HOW HAVE THE RATE HIKES INFLUENCED CRYPTO?

Like many highly valued technology stocks, cryptocurrencies like bitcoin have sunk in value since the Fed began raising rates. Bitcoin has plunged from a peak at about $68,000 to $21,000.

Higher rates mean that safe assets like bonds and Treasuries become more attractive to investors because their yields are now higher. That, in turn, makes risky assets like technology stocks and cryptocurrencies less attractive.

All that said, bitcoin is suffering from its own problems that are separate from economic policy. Two major crypto firms have failed. The shaken confidence of crypto investors is not being helped by the fact that the safest place you can park money now — bonds — seems like a safer move.

WILL MY STUDENT LOAN PAYMENT GO UP?

Right now, payments on federal student loans are suspended until Aug. 31 as part of an emergency measure that was put in place early in the pandemic. Inflation means that loan-holders have less disposable income to make payments. Still, a slowed economy that reduces inflation could bring some relief by fall.

Depending on the state of the economy, the government may choose at the end of summer to extend the emergency measure that’s deferring the loan payments. President Joe Biden is also considering some form of loan forgiveness. Borrowers who take out new private student loans should prepare to pay more. Rates vary by lender but are expected to increase.