Alice Erickson squinted at old, black and white photographs tacked to a bulletin board.

"I can remember seeing them buildings," Erickson said, pointing to an aerial picture of a dozen structures that made up the Pipestone Indian School. "They were dark. I think they might have been made out of quartzite even."

While the 75-year-old struggled to remember the layout of the once-sprawling boarding school campus of the early 1900s, she’s heard stories her entire life about the Indigenous children who lived there.

"When these kids were brought there, or taken from their homes… they cut their hair off," she said. "I see a lot of pictures with these little kids all have the same haircut."

For decades, the federal government took Native American children from their families and sent them to boarding schools around the United States, including to the one in Pipestone, Minn., a small, southwestern town eight miles from the South Dakota border. 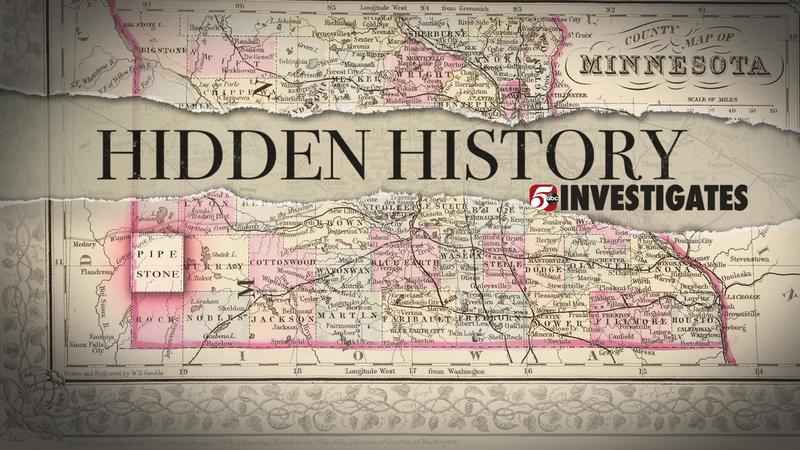 Those schools, most of which have been closed for decades, are now at the center of a new federal investigation.

In June, the Department of the Interior announced a comprehensive review of the "troubling legacy" of American Indian boarding school facilities in the U.S.

The Pipestone school is expected to be included in the probe, as well as the American Indian boarding school in Flandreau, South Dakota, 18 miles west of Pipestone.

The investigation came as a result of the discovery of hundreds of human remains on the grounds of residential schools for indigenous children in Canada.

The final report, expected in April 2022, will identify boarding school facilities in the U.S. and will examine any "known and possible student burial sites" near those grounds.

The news of the mass graves in Canada has sent tribal leaders and native people in Minnesota into the archives, eager to learn more about what is being called the state’s "hidden history."

"There is a desire to know if there is a similar story, an unknown story," historian Brenda Child said.

Child, a Northrop Professor of American Studies at the University of Minnesota, is a leading expert on American Indian boarding schools. The Red Lake Nation member was the first to write about the American Indian experience in these facilities and is sharing her work with tribes across the state.

"Tribal leaders in Minnesota want to know, did kids die in boarding schools in Minnesota or in other states where we sent our children?" she said.

When it opened in the 1890s, the Pipestone Indian School was designed to assimilate Native American youth and suppress indigenous language and culture.

For nearly half a century, the children brought to these schools stayed for years at a time. They lived in dormitories on the campuses. They learned to speak English and were taught to do trade work.

"That was the idea, to kind of educate kids away from their tribal backgrounds," Child said.

The physical remains of many American Indian boarding schools are gone. Only two original structures from the Pipestone campus are still standing.

But the memories of what happened at those schools live on, passed down through generations and documented in letters and other documents.

In fact, it was Child’s own family history that piqued her interest in this research. Her grandmother and great-grandfather both attended American Indian boarding schools and remembered their experiences fondly.

"What we’ve come to understand is that there is not one single story, not one single narrative that fits everybody," Child said. "There was an environment full of Native students. This is the part that my grandparents liked."

But there are also stories of homesickness, runaways, punishment and even abuse.

"Boarding schools didn’t like you (to) speak in your own language," Alice Erickson said, recounting a story she’d heard from an elder in the community. "You had to speak English. And if you didn’t, then they’d smack your hands."

The elder travels every year to Pipestone National Monument in Minnesota to quarry the rock. His children now do the physical work of hammering through the layers of quartzite to get to the pipestone so that Archambault can carve it into sacred pipes when he returns home.

On each trip, he crosses the Minnesota border into South Dakota to visit the Flandreau Indian School. Flandreau still operates as a boarding school for Native American high school students.

Archambault spent two years there in the 1950s. Before he got there, he said he was physically abused as a young boy, reaching underneath his cowboy hat to touch a scar on his forehead.

"I remember being told not to ever say anything about this because you’re going to get in trouble, not me," he said. "I can barely talk about it now without getting mad."

Yet, he said Flandreau was still "like heaven" compared to other boarding schools.

Shedding light on the ‘unspoken traumas’

The fear that children died in those boarding schools and were buried at or near the campuses is driving the federal government’s new investigation.

But these questions have persisted in Native American communities, largely due to stories passed down through generations.

Eighty-eight-year-old Beverly Wakeman grew up near the Flandreau Indian School. Her father worked at the Pipestone school in the final years it was open in the 1940s. She remembers a moment as a girl standing with her dad at the local cemetery in Flandreau that sits across the highway from the boarding school.

"He said, ‘There’s Indian school kids buried here,’" Wakeman said, making a sweeping motion with her hand. "But I never questioned… I mean, what happened to these kids?"

The Department of the Interior is looking to answer that question by launching a first-of-its-kind investigation into the loss of human life and the lasting consequences of residential American Indian boarding schools.

In a video message to the National Congress of American Indians conference in June, Interior Secretary Deb Haaland announced the comprehensive review into policies of the late 1800s, early 1900s.

Read Haaland’s memo below or here, if using the KSTP app.

"At no time in history have the records or documentation of this policy been compiled or analyzed to determine its full scope of its reaches and effects," Haaland said.

The discovery of more than 200 unmarked graves near Canada’s Kamloops Indian Residential School prompted the feds to undertake the initiative.

"The Interior Department will address the intergenerational impact of Indian boarding schools to shed light on the unspoken traumas of the past, no matter how hard it will be," Haaland said in her remarks.

Child says there is now more urgency than ever to answer those questions.

"I think it’s our responsibility, you know, as native people to know our history," she said. "I believe when we get that history right that it’s honoring our ancestors."