The Hennepin County Sheriff’s Office has released body camera footage of deputies serving a warrant early Thursday morning at an Eden Prairie home in connection with a felony suspect who was shot and killed by police after he shot at officers during a traffic stop earlier that night in Minneapolis.

According to Hennepin County Sheriff David Hutchinson, the SWAT team was called to assist the Minnesota Bureau of Criminal Apprehension because a court-signed warrant indicated there was probable cause to believe there were firearms in the home.

The video starts just before 2:19 a.m., and deputies can be seen banging on the front door and yelling, "Police search warrant! Let me see your hands!" before entering the home. 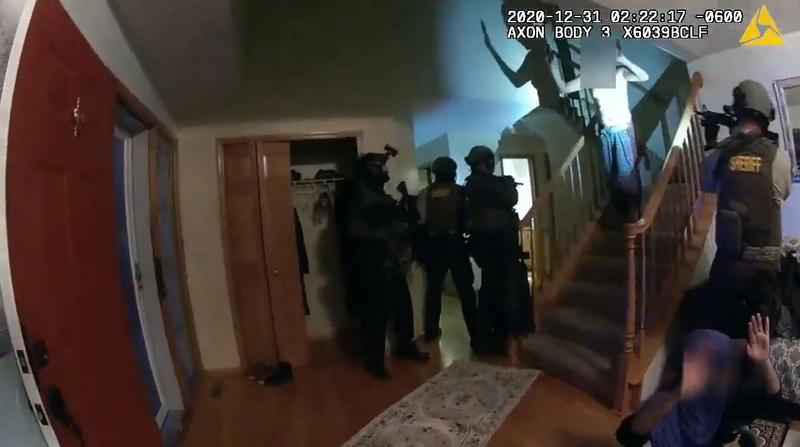 As the deputies enter the house, at least two women are seen kneeling on the living room floor with their hands up. A shirtless man is seen coming down the stairs with his hands up and is directed to go to the living room. A woman can be heard telling deputies, "I have small children."

Someone asks if the officers have a warrant, to which a deputy responds, "You’ll see it, you’ll see it, they’ll get it. No, the investigators have it."

Over the next few minutes, the deputies are seen gathering the rest of the occupants into the living room. In total, four women, two men and three boys appear to be in the home.

One of the women tells the deputies that one of the children has special needs, and at one point the deputy wearing the body camera carries a small child from the stairs and into the living room.

Later, a woman asks if the deputies can tell them anything about the search and at one point asks about a "shooting in Minneapolis." A deputy tells them that investigators will be arriving to talk to them and that "we don’t know" if the search had anything to do with the shooting.

About 14 minutes into the video, the deputies start zip-tying the adults in the living room. A woman asks, "Are you going to zip the kids?" and a deputy responds, "No." One of the women calls the deputies "racist b*tches" while they are restraining the people in the room.

Once everyone was zip-tied, deputies searched the couches in the living room before sitting the family down.

At around the 20-minute mark, one of the deputies asks if anyone was in need of medical attention. No one responded. The deputy wearing the body camera then goes around and writes down each person’s name and date of birth, and the video ends shortly after when the deputy walks out the front door.

It is unknown whether anything was recovered during the search.

Watch the full video below:

The search of the home came the morning after police had shot and killed Idd during a firefight around 6:15 p.m. Wednesday at a Holiday gas station at 36th Street East and Cedar Avenue in Minneapolis.

Body-worn camera footage the Minneapolis Police Department released within a day of the shooting shows squad cars boxing in a white sedan in the gas station parking lot. Glass on the driver’s side window appears to shatter outward, and officers begin firing at the vehicle.

Idd was pronounced dead at the scene. Another woman who was in the passenger seat was unharmed, and no officers were injured, either, police said.

This was the second body camera video to be released this week in connection with Idd in what appears to be an effort to maintain transparency following the first police-involved killing since George Floyd’s death on May 25. The Minneapolis Police Department released video of the shooting itself within 24 hours. The video of the search warrant was posted just over two days after it happened.

In a statement, Sheriff Hutchinson said he made the video of the raid available to clear up allegations that the people in the home were treated inhumanely. Much of that criticism had come from the Muslim community.

The Minnesota chapter of the Council on American-Islamic Relations (CAIR-MN), released a statement Thursday accusing the Hennepin County Sheriff’s Office of improper conduct during the raid and demanded a "transparent investigation." The release states that the "terrifying home raid … could have resulted in tragedy."

State Sen.-elect Omar Fateh, DFL-Minneapolis, whose Senate district encompasses the Holiday gas station where Idd was shot, said deputies handcuffed Idd’s family during the search and only told them of his death after the probe was finished.

"This type of treatment for a bereaved family is inhumane and unconscionable," Fateh said in a statement. "The police have lost the public trust, especially within BIPOC communities. My heart aches for the family of Dolal Idd."

But even after the video’s release, Jamal Hassan, Idd’s uncle, told 5 EYEWITNESS NEWS the footage doesn’t show the full picture.

"We have more questions than answers still," he said. "It still doesn’t show… the video is not complete. And we are letting our attorneys view it, and hopefully in the future we will have a better statement with the attorneys."