It was an emotional day for the family members of Daunte Wright as they laid their loved one to rest.

Hundreds of family, friends and state and national leaders gathered to remember the 20-year-old who was shot and killed by now-former Brooklyn Center police officer Kim Potter.

It was a funeral service that honored the life of Daunte Wright. But it was clear this funeral also had a broader message. There was reference after reference to other Black people who have died during police encounters in Minnesota, naming, among them, George Floyd.

They even talked about the historic conviction of now-former police officer Derek Chauvin.

But the day began with family reflecting on the 20 years they shared with Daunte. 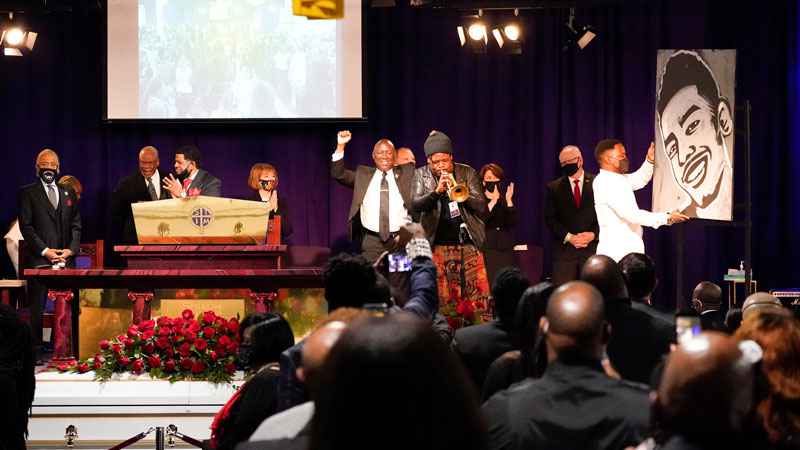 A musical and visual tribute are presented during funeral services for Daunte Wright at Shiloh Temple International Ministries in Minneapolis, Thursday, April 22, 2021. Wright, 20, was fatally shot by a Brooklyn Center, Minn., police officer during a traffic stop.[AP/Julio Cortez, Pool]

Loved ones walked side by side with local and national leaders into Shiloh Temple International Ministries in Minneapolis.

From music to memories, the Wright family reflected.

"I didn’t get to tell him I loved him before he left. He didn’t deserve this," said Monica Wright, Daunte’s sibling.

"Every holiday is not going to be the same anymore without him being here. He was literally the life of the party," said Dallas Wright, another of Daunte’s siblings.

Wright’s mother, Katie, shared her pain: "My son should be burying me."

She added, "He always said he couldn’t wait to make his son proud."

When Wright’s mother became too emotional to continue speaking, his father, Aubrey, said, "Words can’t even explain how I feel right now. You know, that was my son."

The eulogy from civil rights activist the Rev. Al Sharpton called for change. Wright was shot and killed by a police officer right in the middle of the historic Chauvin trial.

Right beside the musicians, an artist created a large portrait of Daunte Wright, honoring his memory.