UPDATE 7/21 – Minneapolis police have released information regarding a shooting which happened shortly after 2:30 a.m. Wednesday at the Marquee apartment building.

According to police, officers were called to the area along the 1400 block of Nicollet Avenue S. for reports of gunshots.

When officers arrived, residents reported property damage which appeared to be from gunfire, and more than 150 casings were found in the area, police say.

Officers found a woman who had been injured due to being grazed by a bullet. She initially claimed her injury was due to falling.

Police say one person, identified as a 34-year-old, was arrested. 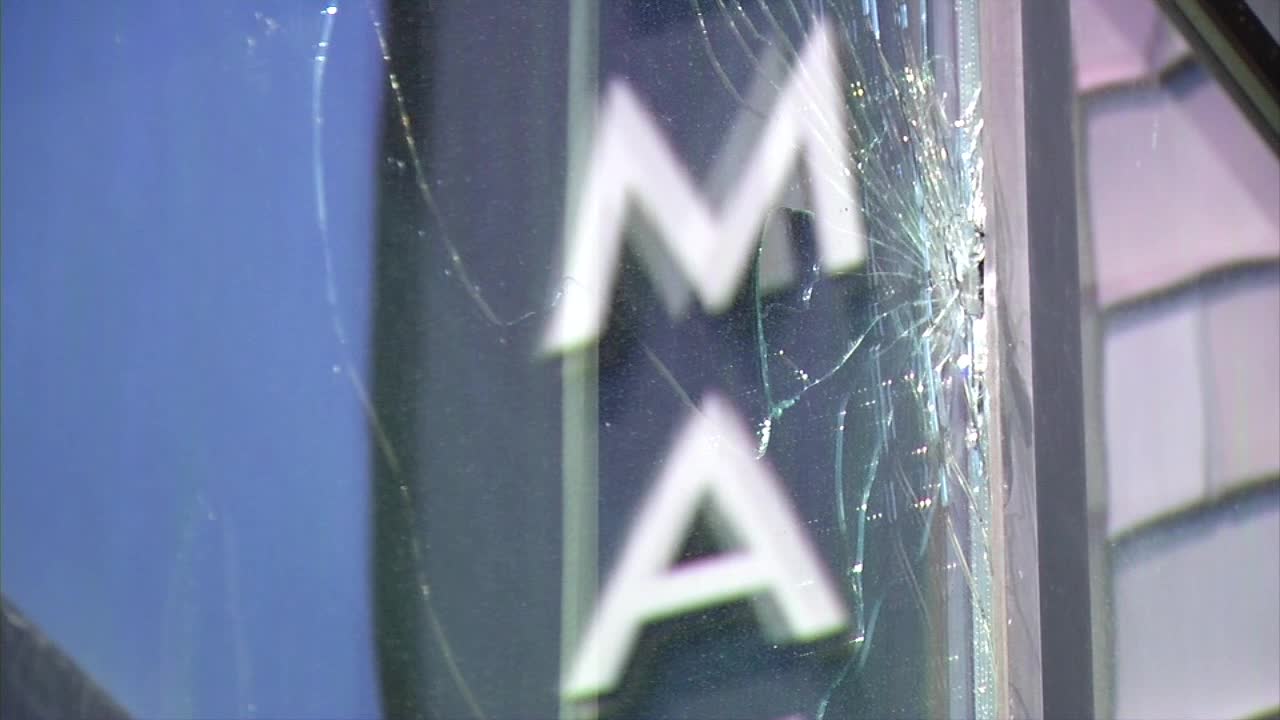 A shattered window at the Marquee apartments in Minneapolis after it was struck by gunfire (KSTP).

In an email obtained by 5 EYEWITNESS NEWS, Marquee management wrote they confirmed with law enforcement the event did not happen in the apartment and the people involved have no affiliation with the Marquee.

No other injuries or arrests were made.

5 EYEWITNESS NEWS initially reached out to police for details before 8 a.m. Wednesday, and received details at 10 a.m. Thursday.

INITIAL REPORT 7/20 – Dozens of gunshots were fired in downtown Minneapolis and were sprayed into an apartment building on Nicollet Avenue early Wednesday morning.

There’s at least one bullet hole on each floor of the Marquee apartment building near Nicollet Avenue and East 15th Street after an overnight shooting.

Village Green, the company that manages the Marquee, confirmed no one in the building was injured in the shooting.

Contractors were boarding up several windows after they were shattered with gunfire Wednesday afternoon.

“It literally sounded like rocks are being thrown at my door. I thought it was a hailstorm,” Norris Vorasane, Marquee apartment resident, said.

Vorasane quickly figured out those were bullets. He was sleeping in his second-floor apartment when gunfire sprayed the Marquee around 2:30 a.m.

“I got up, walked over to my balcony door and then I noticed two gunshots and then you could just see the glass starting to shatter,” he said.

The bullet holes were feet away from where he was sleeping.

“There’s like holes in my wall as well. I’m just trying to figure out how to clean all that up,” Vorasane said. “It could have been worse, but I’m just thankful that I’m breathing.”

In an email obtained by 5 EYEWITNESS NEWS, Marquee management wrote they confirmed with law enforcement the event did not happen in the apartment and the people involved have no affiliation with the Marquee.

Overnight, a 5 EYEWITNESS NEWS camera caught dozens of yellow evidence markers on the ground as law enforcement investigated the shooting.

“From what I heard, it was a commotion that went on in the diner that led out to the streets,” Justin Taylor Cunningham, who lives in the area, said.

Cunningham works at Nicollet Diner, which is steps away from the Marquee.

He said bullets on Nicollet Avenue have become background noise.

“I didn’t flinch. I didn’t have a reaction. It’s unfortunate that me and the community have to get used to this type of stuff,” he said.

Vorasane said he’s coming up on a year in the Marquee and it will be the last.

“My lease is coming up next month. I already told them I’m not living here,” he said.

Village Green officials said the Marquee will have 24-hour security starting Friday and they’re working with police to step up patrols.

5 EYEWITNESS NEWS reached out to Minneapolis Police several times to get more information on the shooting, but we’re still waiting on those details.