"I think it would be very unusual for five different, three different police departments stretching over a decade to fabricate information," the governor said at an education event in Lake Elmo. He continued to call for Thompson’s resignation. "Multiple accusations, cases of domestic violence in the presence of children just makes it so that I do not believe the representative can continue to serve us well."

Among the police and court records, an Eagan police incident report from 2006 highlights a female victim claiming Thompson "put both
his hands around her neck and started choking her and told her ‘I’ll choke you until you can’t breathe anymore.’"

Court records from Washington County indicate in another case from 2006 Thompson "assaulted petitioner in presence of her child by striking her in the throat" and told her "I’ll kill you."

In a 2011 case in St. Paul, a police incident report recounts an alleged assault on a 15-year old daughter of his girlfriend. According to the report, Thompson "grabbed girlfriend’s daughter, pushed her, attempted to choke her (victim’s daughter)." 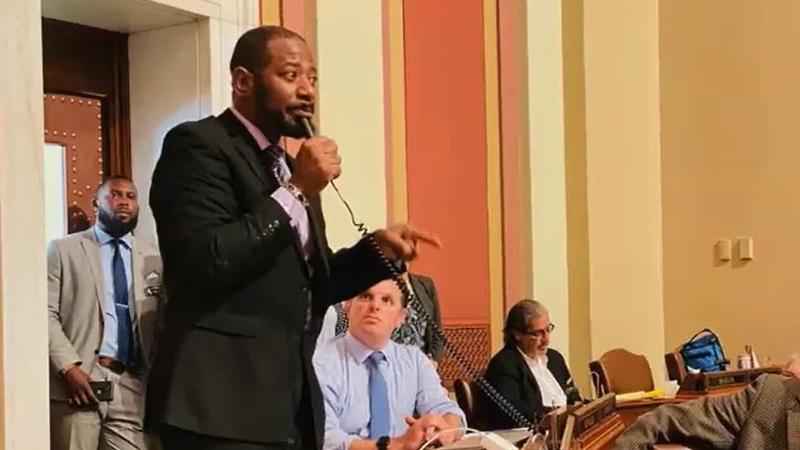 Through his attorney, Thompson denies all the allegations, points out he’s never been convicted of domestic assault and questions the "authenticity" of the police and court records.

Although Thompson remains silent, his wife posted on Facebook over the weekend "my husband is under attack." She does on to say, "I AM IN FIERCE PROTECT MY KING/ MY PACK MODE please understand that ‘RESPECTFULLY’, WE ARE NOT RESIGNING!!!"

If he doesn’t resign, House Republican Minority Leader Kurt Daudt, R-Crown, says his caucus is preparing multiple ethics complaints, including a focus on whether he lied about his residency on his "affidavit of candidacy" to run for office and whether he violated Wisconsin law by repeatedly renewing his Wisconsin driver’s license for 18 years.

"We not only have to look at Minnesota law, we have to look at Wisconsin law and see what it meant when he signed that application for renewal of that driver’s license," Daudt told 5 EYEWITNESS NEWS on Monday. "Was he stating he was a Wisconsin resident under penalty of perjury? And it does look like he was doing that. … He either lied to them or he was not a Minnesota resident and was not eligible to serve in the legislature."

Daudt says it may take some time to file the ethics complaints because they have to provide all the evidence and documentation at one time and cannot amend the complaint once it’s filed, according to House rules. Ultimately, if a complaint is forwarded to the House floor by the ethics committee Daudt says it would take a two-thirds majority to expel Thompson from the legislature.