With his wife and daughter at his bedside, Pastor David Kent told us how his life changed in seconds.

“Took one slip, I was down on the ground. My hands, my arms, my legs were all paralyzed,” he recalls. “I couldn’t move, my hands were in the snow. I knew that wasn’t good.”

Kent says on Dec. 16, he was walking on a downhill road in front of his church, the Christian Life Center in Golden Valley — when he suddenly slipped and broke his neck.

“Very icy,” he says. “You can hear the ambulance peeling out to try to get back up the road, so that’s how icy it was. It was super-slick.”

Doctors told them they would have to remove two vertebrae and put a rod in his spine to strengthen and stabilize it.

“They said we need to do surgery quickly, because he’s broken his C4 and C5,” the pastor’s wife, Susan, explains. “They said spinal cord injuries have to have surgery within 24 hours… and if they didn’t do it fast, (the area) below the C5 could be damaged as well.” 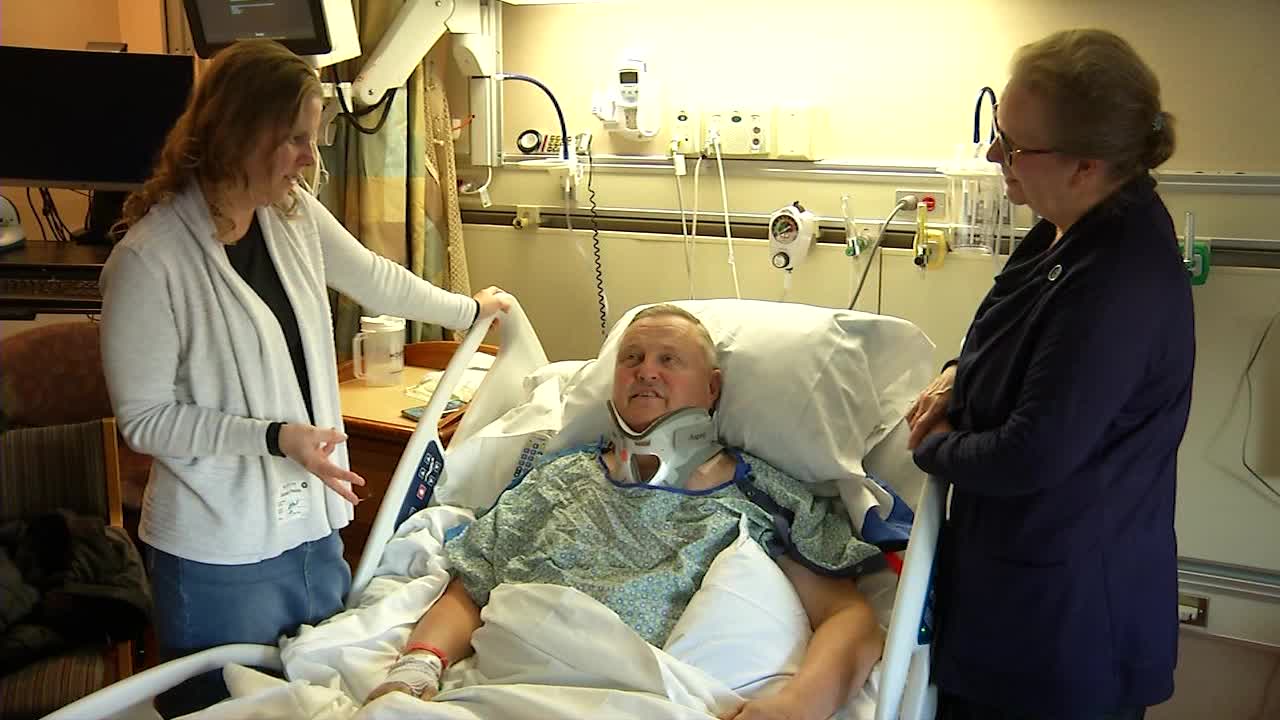 Kent says at first, he was unable to move his arms, legs, feet and hands.

But after weeks of physical and occupational therapy, he’s making progress.

“Initially, I couldn’t move like, this arm. I’ve got some movement side-by-side,” Kent explains. “I wept when they put these stimulus things on my arm and I could actually see for the first time since the 16th of December, my fingers move.”

“Absolutely, he’s shown a lot of recovery so far,” declares Kim Franklin, a nurse practitioner who is part of Kent’s medical care team at North Memorial Health. “Being able to move his arm. Just today, we were excited that he was able to wriggle his right toes.”

“We’ve gotten a lot of injuries of people slipping and falling this year,” Franklin notes. “A lot of orthopedic injuries and a handful of spinal injuries, and it’s not uncommon to see an incomplete spinal cord injury like his.”

As he recovers, Kent and his family say they’re facing yet another challenge.

Thacker says her father’s in-hospital therapy has just weeks to go before he’ll need to switch to a private provider.

She explains that because he’s self-insured, providers she’s contacted are asking for thousands of dollars up front — money she says the family doesn’t have.

“It’s sticker shock for sure,” Thacker says. “One facility we recently talked to was $7200-per-day for self-pay patients and that he’ll need eight-to-12 weeks of intensive acute care rehab. It’s daunting.”

She says if her father gets into a full-time rehab facility — he could receive as much as eight hours of therapy a day.

She’s launched a crowd funding account which she hopes will help.

Kent says he’s an optimist — ready to face the unknown.

“It may be a slow healing, but I believe he is going to walk again,” Susan exclaims. “I don’t know how long it will take, I don’t know how much rehab he’ll have to go through. But we have hope.”

“I wouldn’t wish this on anybody,” Kent says. “Definitely, it’s been an experience where I can say I’ve been blessed — because of all the people that have come alongside and been a strength to me.”

You can find out more about the family’s GoFundMe account here.