Some were so excited, they were in line hours ahead of when gates opened at 7 a.m.

Jordan Johnson, who claims to be the number one fan of the fair, started waiting in line at 7 p.m. Wednesday.

“I was listening to some sports radio, was playing on my phone, was just chilling. It was good weather” said Johnson.

He went on to say a few years ago, he saw a Facebook post where the first fair-goer was a Packers fan, and became determined to represent his team at the fair. 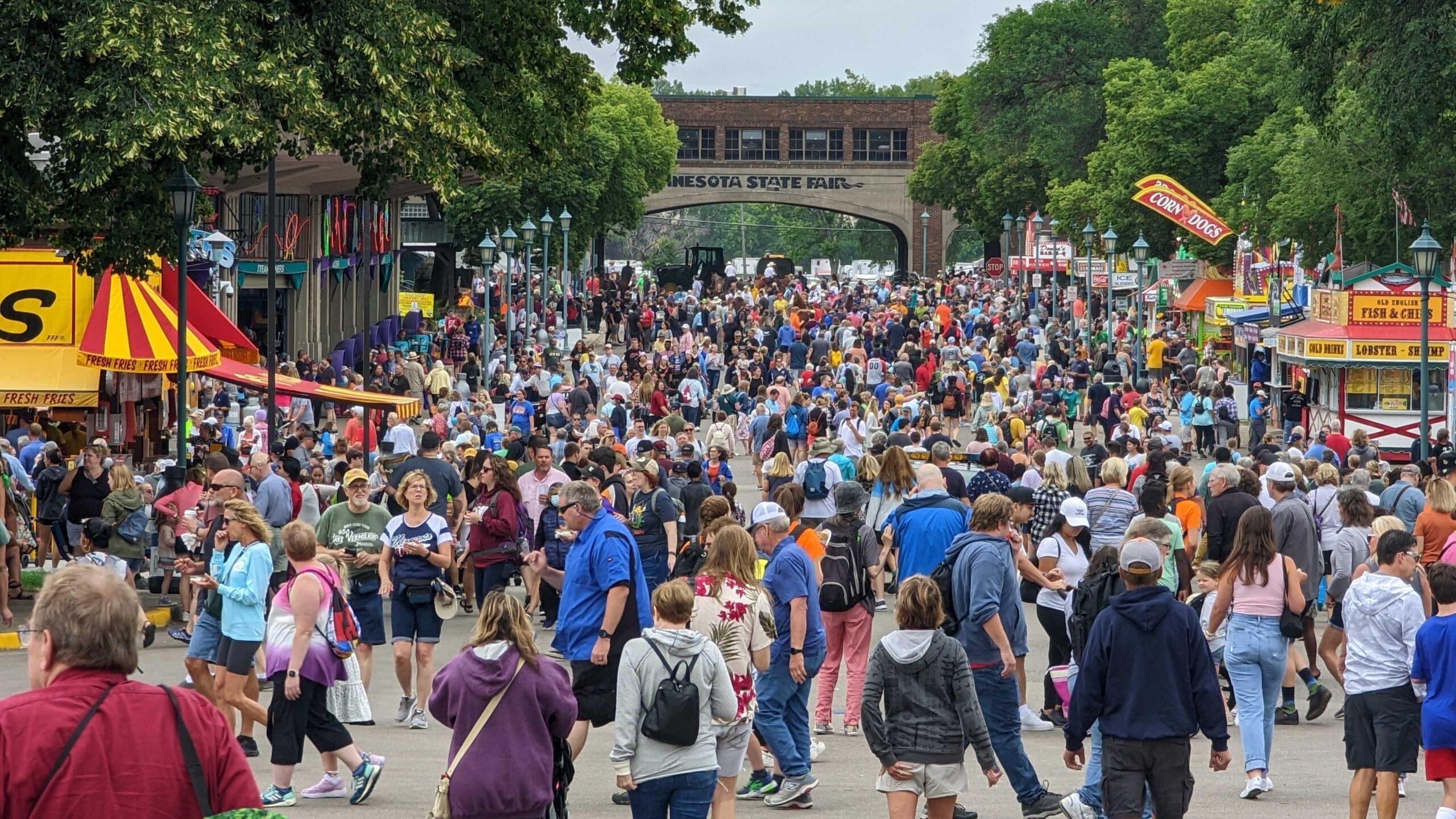 Crowds gather for the first day of the 2022 Minnesota State Fair. (KSTP/Nate Bergeson)

Thursday morning, he did just that, bringing a Minnesota Vikings backpack.

He says to prepare for the weather, and to get a deep-fried Snickers bar, and enjoy it, saying it’s a good time to enjoy the weather and food.

Ginger Johnson, another fan of the Minnesota State Fair, was among those in line ahead of when gates opened. Despite being a Packers fan, she wore her green and yellow Minnesota North Stars apparel to mark the opening day.

Ginger says she’s excited to meet up with friends she has made at the fair and trying out the food. She also recommends to not try and do everything at once, and to try and make multiple trips to the fair.

Those who are in line ahead of time will be welcomed by Minnesota Gov. Tim Walz, who will be meeting fair-goers and voters starting at 6:30 a.m. He’ll be joined by Lt. Gov. Peggy Flanagan at the main gate along Snelling Avenue.

Meanwhile, Walz’s challenger Dr. Scott Jensen, will also be at the fair later on Thursday. He and running mate Matt Birk have their own stand set up, and will be ready to meet and speak with voters. They’ll be near the corner of Dan Patch Ave. and Underwood St.

Keep in mind that due to inflation, prices have increased – you’ll notice bigger price tags on admission and food. Gate admission tickets went up a dollar to $17, while a bucket of Sweet Martha’s Cookies increased to $19, also up a dollar. Deep-fried pickles are now $9, and a deep-fried candy bar increased from $5 to $6.

“We did have some price increases with our cost of goods, so there’s some of that reflected,” said Martha Rossini of Sweet Martha’s Cookies.

However, lots of entertainment is still free.

Also Thursday, a long-time State Fair classic is celebrating a major milestone – the Hamline Church Dining Hall is marking 125 years at the fairgrounds.

Many local and state leaders, such as St. Paul Mayor Melvin Carter and Walz, are planning to attend the anniversary celebration, which begins at 9 a.m.

If you’d like to say hi to team members at the State Fair, the KSTP building is at the corner of Chambers and Carnes. We will have live reports from the fair, and also have giveaways.