Future unclear for ‘Peeps the Goose’

The fate of a well-known Canada Goose is in limbo as its adoptive family works to bring him back to their home.

5 EYEWITNESS NEWS first introduced you to ‘Peeps the Goose’ last August after he was turning heads on Prior Lake. To help stretch his wings, Peeps would fly next to the Hendrickson family of Prior Lake’s jet ski.

The Hendrickson’s have had Peeps since he was a gosling after it waddled up to them on their property. They took it in to help their son through the pandemic.

Shortly after our first story ran, a woman who had also raised a goose at home asked the family if they’d take in her goose Puddles. Peeps and Puddles quickly bonded. 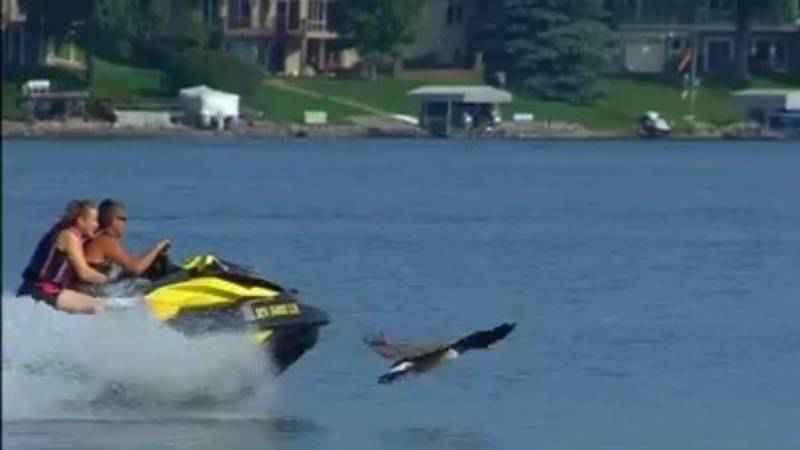 Fast forward to last week; Peeps did not return from one of their daily flights.

After a few sleepless nights, the Hendrickson’s received a phone call. Peeps had been found trying to get into someone’s truck in Savage. At this point, the U.S. Fish and Wildlife Service was in the mix and told the Hendrickson family they would likely not get Peeps back.

“They aren’t allowed to tell us where he is or anything. We didn’t get to go say goodbye or anything like that… it’s hard,” Ronnie added.

Ronnie added he knows they should have approached this differently from the start when Peeps was a gosling. The family understands what they did – and are doing with Puddles – is breaking federal law.

Under the Migratory Bird Treaty Act, the geese are protected.

U.S. Fish and Wildlife Service Public Affairs Specialist Tina Shaw says the federal laws blocking people from keeping wild animals as pets boil down to safety – both for wildlife and the public.

“As [the animals] move through maturity they can get quite violent, unintentionally, because they’re used to communicating with geese, not people,” Shaw said.

“While there is a conservation angle with our involvement to protect the bird, or wildlife in general, it’s also for the safety of people,” she added.

Shaw did not want to speculate on Peep’s future but did say the goose in question is safe.

She did want to use this as an opportunity to educate people on what to do if they find a baby bird or if people think they spot a wildlife crime. Shaw said it’s not a matter of if, but when.

As for the shed, Ronnie says that’s off the table as he worries predators would get to the geese. He and the family haven’t thrown out the idea of making it official. Ronnie mentioned he could see the geese being educational for children or perhaps used for emotional support.

The family is also simply asking for a ‘pardon’ or an exception. As of Wednesday afternoon, an online petition aimed at gaining support to ‘Bring Peeps Home’ has over 17,800 signatures, up from more than 2,000 signatures Tuesday night.

Currently, Peeps is getting evaluated by a licensed rehabilitator to see if it would be safe to be released into the wild. If Peep’s is deemed not suitable for the wild, it’s unclear what will happen. Shaw didn’t want to speculate and the Hendrickson family have not been told.