Fresh snowfall during the overnight hours is believed to have caused multiple crashes around the Twin Cities metro area as road conditions deteriorated.

The Minnesota State Patrol reported 175 crashes — including 10 that resulted in injuries and two that were fatal — and 199 vehicles off the road or spun out between 6 p.m. Tuesday and 11 a.m. Wednesday. Eight jackknifed semis were also reported during that timeframe.

Expect another 1" to 2" of snow on top of the inch or so that has fallen in the metro so far today. Winds are gusting to 30-45 mph creating blowing and drifting, especially in Greater Minnesota. Temps tumble today as well from the teens into the single numbers by 2 PM #mnwx #kstp pic.twitter.com/zABWCiUyiO

As if that isn’t enough, temperatures will be dropping throughout the day, and wind speeds will be playing a big role in road conditions. CLICK HERE for your latest forecast.

The Minnesota Department of Transportation (MnDOT) said as of Wednesday morning, no travel was advised for the northwest region of the state.

MnDOT announced no travel advised on Highway 2 from East Grand Forks to Crookston in NW MN due to high winds and blowing snow causing no visibility. Snowplows will continue to operate, but motorists are advised not to travel until conditions improve. https://t.co/tRGmxvnkZA

Wind speeds are important because once temperatures dip low enough and the snow starts blowing across roads, products plow drivers use are less effective.

Light, powdery snow was still falling early Wednesday morning as the commute hours began. While that snow is good for snowboarding, it gives drivers trouble on the roads.

If you haven’t stepped outside yet – here’s what to expect on the roads as you head to work and/or school this morning.

MnDOT is giving the following reminders to help you get through the morning safely:

"Try and be patient. Give us the space and the room that we need to do our job because we are out there for them. You know we are trying to make the roads safe for them to get home to their families," said one MnDOT "snow fighter".

WC MN – areas of reduced visibility creating problems. I94 mp35 (west of Rothsay) wind out of the NW making this SE part of the road disappear. Video doesn’t do it justice. There are now 3 semis & 1 passenger veh in the median now (no inj) visibility can change fast out here. pic.twitter.com/J9b0Hspvmg

The weather conditions are also causing some schools to open late, or opt into virtual learning. CLICK HERE for an updated list of those districts. 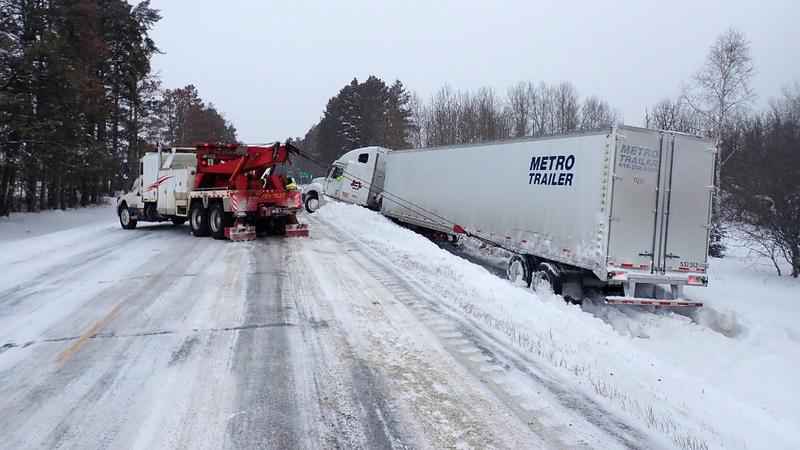 A semi-truck is pulled out of a ditch after running off the road in northwest Minnesota on Wednesday, Jan. 5, 2022.[Minnesota State Patrol/Sgt. Jesse Grabow]

Make sure to follow Hanna Conway on Twitter for the latest on road conditions in the area. Her latest updates can be found below.