Jerry Burns, who served as the Minnesota Vikings’ offensive coordinator for 18 years before transitioning to the head coaching role in 1986, has died, the Vikings announced on Wednesday. He was 94.

Burns got his start in the coaching world with the Iowa Hawkeyes. He served seven years as an assistant coach under Forest Evashevki before being promoted to the program’s head coach in 1961 when he was just 34 years old.

He moved up to the professional level in 1966 and joined the Green Bay Packers as an assistant coach under Hall-of-Fame coach Vince Lombardi. The Packers won the first two Super Bowls in the two seasons Burns spent in Green Bay.

In 1986, Burns took over as the Vikings head coach following Grant’s retirement. Over six seasons, Burns led the Vikings to three playoff appearances and one division title in 1989. The Vikings had a 52-43 record under Burns’ head coaching stint. 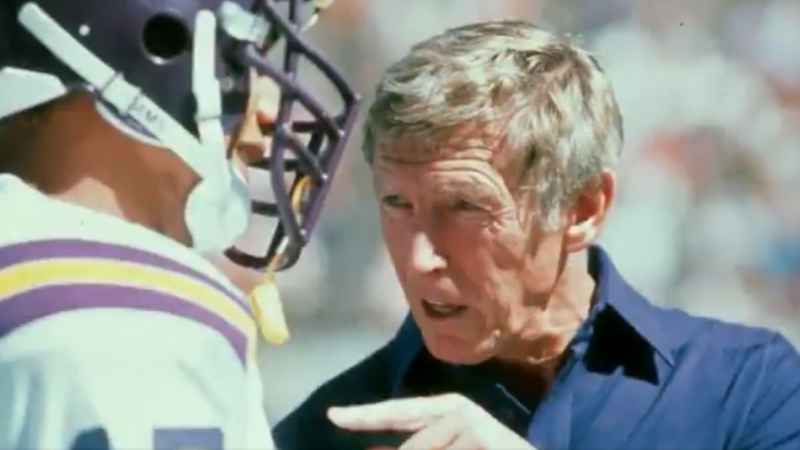 "I met ‘Burnsie’ at Iowa when he picked me up from the airport when I was visiting down there, and from that point on, we started talking football and never stopped. We were on the same page a lot. When I went to Winnipeg, I’d have him come up as a guest coach. Our friendship grew over the years, and we became very close friends and so did our families.

"When I got the job in Minnesota, I talked to him about coming here, but he had a contract with Green Bay. The first year I was at the Vikings, I coached one guy short. I was holding the job for ‘Burnsie’ until he could come the next year. He was a very astute football mind. He could see things on the field immediately. He was as important to my career as anyone I’ve been involved with. His coaching help, friendship, loyalty, family — he brought everything to the Vikings he had. I’m gonna miss him."

Hall-of-Fame quarterback Fran Tarkenton, who played his last seven pro seasons with the Vikings — including his MVP 1975 season — while Burns was an offensive coordinator, said Burns had a "brilliant" coach who "made everybody smile."

"He was a brilliant, brilliant coach," Tarkenton said. "He enabled me to be better than I was. We worked together so closely for so long and nobody ever had more fun doing it. We were laughing, yelling and screaming, but never had a crossword to each other. He had my total admiration. Without him, I would never have done what I did. He was critical to the success of the Vikings of that era. He was so important to our success. We had the partnership of partnerships and maintained that relationship long after football."