Until losing his seat on the Board of Regents earlier this year, Michael Hsu was one of the loudest and most critical voices at the University of Minnesota.

Now a chorus of lawmakers, faculty, and a former governor say Hsu was targeted by a well-financed campaign involving some of his own former colleagues.

Some are even requesting the state’s legislative auditor to launch a formal investigation of lobbying efforts involving a political action committee that has received thousands of dollars in contributions and public support from four regents and two former university presidents.

Outspoken from the start

In his first on-camera interview since leaving the board in March, Hsu acknowledged that being outspoken on a variety of topics — from rising tuition, to athletics, to multiple scandals — made him unpopular with some administrators and other influential figures at the university. 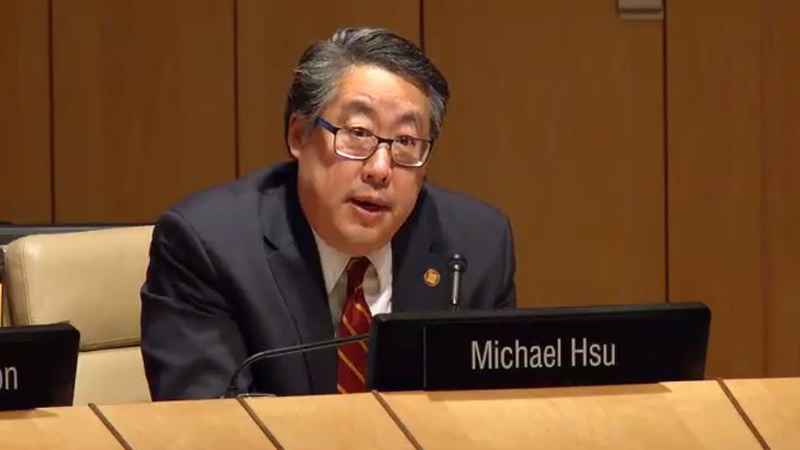 "I had a lot of people after me for various issues," Hsu said. "I have heard that there are people who worked very hard to keep me from being reelected."

Hsu’s choice of words on another more recent scandal may have fueled the efforts to keep him from sitting on the board for a second term.

He was responding to a series of reports by 5 INVESTIGATES that found administrators waited years to take action against former star professor Aaron Doering after they were first alerted to his possible misspending of taxpayer money and grant funds.

Doering only resigned after revelations that he charged tens of thousands of dollars in personal expenses to the university and had been convicted of the domestic assault of a former girlfriend.

Internal e-mails show that Hsu asked administrators to explain what they knew and how much money was involved, but he says he never got a response.

The University of Minnesota and Board Chair Ken Powell have repeatedly and publicly denied the allegation of non-compliance, citing the institution’s auditing process and external reviews.

Privately, Powell chastised Hsu for his comments in a letter that Hsu later shared with 5 INVESTIGATES.

"Your comments to the media were unacceptable," Powell wrote, adding that Hsu displayed a "reckless disregard" for his obligations as a member of the Board of Regents and that Hsu had damaged "the University’s reputation."

Hsu made no apologies.

"I wrote a letter back and I basically … told him that I thought I had fulfilled my fiduciary responsibilities by asking these questions and the fact that nothing was done? That’s not my fault," Hsu said. "I feel there is actually a lot of pressure not to say anything, that regents should just be quiet."

Five months after that dispute, Hsu narrowly lost his bid for a second term when the legislature voted in four new members to the Board of Regents.

Now several lawmakers say they were specifically lobbied to vote against Hsu.

"That is a fact that I know firsthand — (Hsu) was definitely targeted," said Rep. Brian Daniels, R-Fairbault, who also sits on the Regent Candidate Advisory Council, a committee that recruits and recommends candidates for the Board of Regents.

Rep. Marion O’Neill, R-Maple Lake, also questioned the influence of the nonprofit group Maroon and Gold Rising. The organization is unaffiliated with the U of M but was formed by alumni and former regents. It also operates a political action committee that shares the same name.

"They hired lobbyists and influencers and they went to Republican and (DFL) legislators and convinced them to oust Michael Hsu," O’Neill said.

Maroon and Gold Rising did not respond to a request to comment for this report, but in January it issued a statement saying, in part, "Our sole mission is to independently advocate for the University’s requests of the Minnesota legislature."

Last year, the PAC received a combined $8,500 from now-former Regent Richard Beeson, as well as current Regents Janie Mayeron, David McMillan and Board Chair Powell, according to campaign finance records.

No regent contacted by 5 INVESTIGATES would agree to an interview on camera, but in phone calls and emails, they defended their contributions to Maroon and Gold Rising.

"We respect the First Amendment rights of Regents — to speak publicly about University matters and … make political contributions," Powell wrote in a statement.

Regent David McMillan said his contributions to the PAC were to influence "bonding and biennial budget outcomes."

"I didn’t call them up and say, ‘Can you guys affect regent elections?’ That’s not where my money was going," McMillan said.

Regent Janie Mayeron said she has no understanding that Maroon and Gold was involved in the regent election process and defended her decision to donate to the PAC.

"I have a right as a citizen of the United States to participate in the political process and to donate both time and money in that political process, and I do not think there was anything inappropriate or unethical," Mayeron said.

A day after the regent elections, former Gov. Arne Carlson and professor Richard Painter, a well-known expert in legal ethics at the U, wrote a letter to Legislative Auditor James Nobles calling for an investigation of the flow of money and support from leaders at the university to Maroon and Gold Rising.

"The best thing that can be said for it is shabby behavior, but that’s not acceptable for a public university. We expect the highest standard of ethics and honesty and transparency," Carlson said.

Painter says he wants an independent investigator to answer key questions about the workings of the Maroon and Gold PAC.

Nobles said the Legislative Audit Commission would consider the Carlson-Painter request this month during a process it follows to determine which topics his office ultimately investigates. At last check, Nobles said the request is “still under consideration.”

But on the phone, Kaler downplayed his involvement.

"I’m not in regular touch with them. I’m not involved with strategy or anything like that," Kaler said.

Others, such as O’Neill, are not satisfied.

"I think what happened at this regent selection is indefensible. I think that the administration needs to stay out of it and they need to stop trying to influence legislators," she said. "It was pretty apparent what was happening. To me, it was quite disappointing."

Hsu says he does not regret taking on the fights that may have cost him a second term.

"In fact, there were battles that I didn’t fight that I probably should have fought, but every battle takes time," Hsu said. "I’ve taken the minority views on a lot of these topics and when you do that there’s no question that the organization is going to try to take the easy way, which is to get rid of you if they can."