Prosecutors asked Kueng a bit more about excited delirium, which he said can make a subject not register pain. The government pointed to Floyd’s complaints about the handcuffs before he was taken to the ground as an indication Floyd felt pain, but Kueng disagreed, saying many subjects who want to get out of handcuffs recite that complaint.

After circling back to Kueng’s comments from Wednesday when he said he deferred to Derek Chauvin, since Chauvin was the senior officer, Kueng said he’d never seen the neck restraint Chauvin used on Floyd but assumed Chauvin must’ve been trained in it. When prosecutors displayed care procedures for neck restraints, Kueng admitted, “In the moment, that didn’t cross my mind,” adding that he was concerned about scene safety.

However, when the prosecution focused more on scene safety, Kueng said he “was unable to make that determination from my position.” He also confirmed he never felt the need to help Thao control the crowd, to call for backup or to protect the paramedics when they arrived at the scene.

Kueng reiterated Thursday that he deferred to Chauvin and, regarding duty to intervene, suggested that it was hard for him to intervene in something he didn’t fully understand. He added that, he never had any scenario-based training in duty to intervene and, from his position, he couldn’t fully see where Chauvin’s knee was.

When asked why he never told Sgt. Ploeger or Lt. Zimmerman about Chauvin’s actions, he stated it wasn’t his place to do so because Chauvin had a different perspective and should’ve been asked directly. Kueng also said he believed those were public safety reports and he didn’t believe Floyd’s consciousness was relevant information. 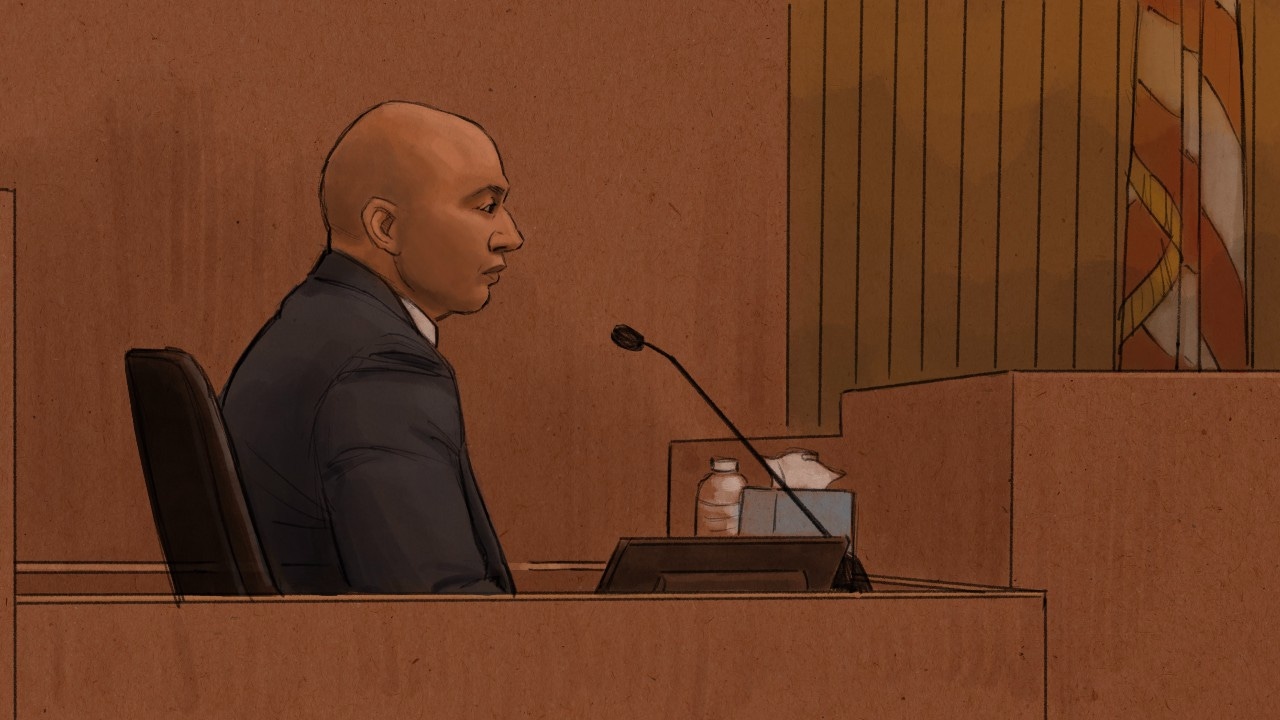 This sketch shows former Minneapolis police officer J. Alexander Kueng as he testifies on Feb. 16, 2022, in the federal trial where he and two others are charged with violating George Floyd's civil rights. (Courtesy: Cedric Hohnstadt)

Kueng and his attorney pointed blame at his training, saying much information is presented in a PowerPoint on slides with just small pieces of information. He added that he can’t remember everything on those slides.

He also testified that a probationary officer skills checklist has several points that an FTO is supposed to train the probationary officers on before signing off on those points. However, Kueng said that wasn’t his experience, stating that his FTO didn’t review any information on the checklist with him.

“He just told me to sign, no review,” Kueng said.

Kueng also gave an example of instructors leaving the room of officers during a test and telling them “nobody will know if you work together.”

Kueng and his attorney also refuted the handcuff pain argument by stating many subjects complain about handcuffs to get out of them. They also highlighted the paramedic’s seeming lack of urgency at the scene and Kueng stated he heard the paramedic tell his partner to get them away from the scene.

The former officer was excused from the witness stand shortly after noon as the defense called police expert Steve Ijames, who also testified in the trial of former Brooklyn Center police officer Kimberly Potter.

Ijames testified about training officers and the need for scenario-based training for important points. He also said tests are needed, otherwise, officers tend to not actually learn much of the material because they aren’t being held accountable.

“If you don’t test them and validate it, expect them to get it wrong. Especially on complex issues, they’ll get it wrong more than they get it right,” Ijames said.

He also said a 2018 survey regarding the Minneapolis Police Department’s FTO program showed the program was “in big trouble.”

Ijames testified that, based on MPD material he reviewed, he believes an officer would defer to a more senior officer. Therefore, he believed that it’s not unreasonable to believe Kueng would’ve deferred to Chauvin.

However, when prosecutors questioned Ijames, he testified that he believes Kueng understood and had adequate training for unreasonable force and providing medical aid to help Floyd, and agreed that Kueng didn’t say or do anything to stop Chauvin’s force on Floyd. Ijames also stated, “conceivably, there’s lots of options” for things Kueng could’ve done to help Floyd.

After Ijames was finished, Earl Gray, Lane’s attorney, started presenting his case by calling the final witness to testify Thursday — former Minneapolis police officer Gary Nelson, who worked in the department from 1995 through the summer of 2020. He was also a Minnesota National Guard citizen-soldier for 22 years.

Nelson described MPD as “a paramilitary organization” where rank and hierarchy are important. He briefly explained the police academy and the importance of rank, and mentioned that a field training officer and a trainee typically would develop a bond where the younger officer would come back to the FTO with questions in the future.

When asked about who’s in charge of a scene, Nelson responded that the most senior officer would take charge.

Nelson also confirmed that an FTO can’t unilaterally fire a probationary officer, and said officers are told they’re accountable for their actions and inactions.

Wednesday, Kueng testified that he deferred to former officer Derek Chauvin because he was his senior officer and that’s what he had been trained to do.

Kueng is one of three former officers charged in federal court with violating George Floyd’s constitutional rights when Chauvin pressed his knee into Floyd’s neck as the 46-year-old Black man was handcuffed, facedown on the street.

Kueng knelt on Floyd’s back, Thomas Lane held his legs and Tou Thao kept bystanders back.

Kueng says he was concerned about officers’ inability to stop Floyd from thrashing around as they tried to arrest him.

He testified Wednesday that when Lane suggested changing the restraint, Chauvin disagreed.