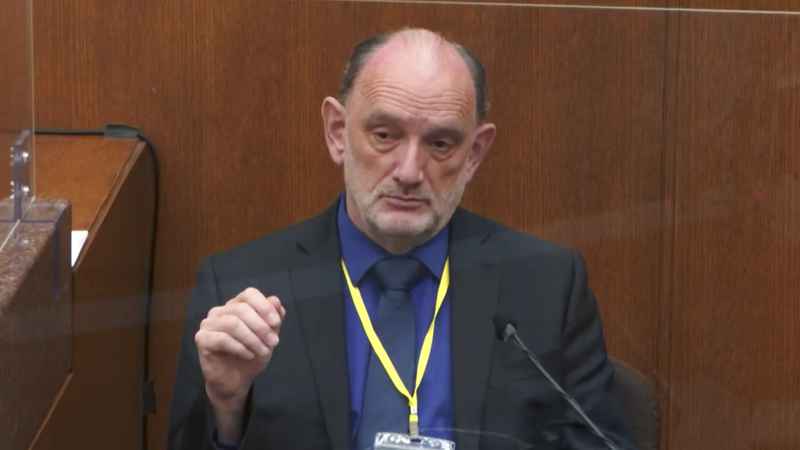 In this image from video, Dr. David Fowler, a retired forensic pathologist and former chief medical examiner for the state of Maryland testifies as Hennepin County Judge Peter Cahill presides, Wednesday, April 14, 2021, in the trial of former Minneapolis police Officer Derek Chauvin at the Hennepin County Courthouse in Minneapolis, Minn. Chauvin is charged in the May 25, 2020 death of George Floyd.[Court TV via AP, pool]

Maryland’s former chief medical examiner is testifying for the defense in the Minneapolis murder trial of former police officer Derek Chauvin. His testimony comes at the same time he’s being accused of helping to cover up the police’s role in the 2018 in-custody death of Anton Black, a Black 19-year-old from the Eastern Shore.

“It’s surreal that you have two men on the opposite sides of the country that experienced almost the same treatment by two different police officers," said LaToya Holley, Black’s sister. "The medical examiner, in my opinion, was egregious in the way he finalized Anton’s autopsy results. Now, he’s being called to be an expert witness for another police officer.”

Dr. David Fowler, Maryland’s chief medical examiner from 2002-2019, was called Wednesday as an expert witness for the defense of Chauvin, the former Minneapolis police officer charged with murder in George Floyd’s death.

In December, Fowler was named a defendant in a civil lawsuit brought by the family of Black. The lawsuit, led by the ACLU of Maryland, personally names Fowler, along with the state medical examiner’s office and a myriad of police agencies and police officers, and accuses him of concealing law enforcement’s role in Black’s death, which the lawsuit claims was at the hands of the police.

Specifically, the ACLU accuses Fowler and the medical examiner’s office of obstructing the officer-involved death investigation by delaying the release of an autopsy for months, being improperly influenced by police and clearing the path for police to “develop a narrative that absolved the involved officers of their wrongdoing.”

Asked about Fowler’s role in the Minneapolis trial, “We don’t find Dr. Fowler a credible witness by any stretch of the imagination, because he’s consistent in his autopsies where he wants to assist the officers in demonizing and criminalizing blacks who are killed by police,” Rene Swafford, an attorney on the Black family legal team, said in an interview with WTOP.

Black died from cardiac arrest on Sept. 15, 2018, outside his mother’s house after a pursuit and struggle with three white police officers and a white civilian.

According to the police report, a 911 caller alleged she saw Black dragging a younger boy in a "headlock" down the road in Greensboro, Maryland.

When police arrived, according to their report, the officer exited his patrol car and "gave a verbal command to Black to get his attention."
The boy, 12, then told the responding officer Black was "schizophrenic." In fact, Black had recently been diagnosed with bipolar disorder, according to the medical examiner’s report.

The officer then told Black "to put your hands behind your back" in an effort to cuff him. At this point, Black began jogging away.
Despite Greensboro police guidelines calling for de-escalation efforts during mental health crises, the officer and at least three other white men, including two off-duty officers and a civilian, pursued Black approximately 2/10th of a mile to his mother’s home. It was there a physical struggle broke out between 5-foot-9 Black and police officers, which ended with Black handcuffed and shackled on a ramp outside his mother’s front door and a police officer on top of him.

"The officers forced Anton into a prone position, so that his face, chest and stomach were pressed to the ground, and Chief [Gary] Manos laid across Anton’s back, using his full body weight to hold him down and pin him to the ground," the lawsuit states. "Chief Manos, who is much larger than Anton was, would remain with his weight atop Anton’s slight, 159-pound body for the next six minutes or more, even when Anton stopped moving, and even with the other men further restraining him in additional ways, such as by holding his legs."

From the police-worn body camera footage, you can hear a police officer say to Manos, who is straddled across Black’s back as they are trying to cuff him, "Roll to your hip, chief. Roll to your hip.” And, after Black is shackled, an officer gives an instruction to roll Black over “so he can breathe."

After rolling Black on his side and then sitting him in an upright position, you can hear Black’s mother say he is "turning dark." Officers then initiate CPR for approximately 6.5 minutes while waiting for EMS to arrive, according to the Maryland State Police timeline of events.
The former high school football and track star would later be pronounced dead at Eastern Memorial Hospital.

It would take four months from the time the autopsy was performed for Fowler to sign off on the medical examiner’s report and officially declare the cause of death an "accident". The report was released only after Maryland Gov. Larry Hogan intervened and asked for the report to be released for the sake of the family.

"The family, the Police Department, the community, everyone deserves to get answers,” Hogan told the Baltimore Sun in a January, 2019, interview. Within 48 hours, Fowler’s office turned over the report to the Caroline County State’s Attorney’s office. It was released to the public the following day.

Fowler said Black had suffered a "sudden cardiac death" and cited an underlying heart condition — one that Black had never been diagnosed with, the family said. A recent mental health diagnosis of bipolar disorder was also a “significant contributing condition” to Black’s death, according to the autopsy report.

In January, 2019, Caroline County State’s Attorney Joe Riley cited the autopsy results in determining not to call a grand jury to further investigate the role of the police in Black’s death. Two months later, Riley announced he would not seek charges against any of the individuals involved in Black’s death citing a criminal investigation by Maryland State Police into the incident.

The ACLU called Black’s death “a clear example of how white supremacy functions to deny accountability for misconduct and racial bias.”

Floyd, a 46-year-old Black man, died May 25, 2020, laying face down and handcuffed on the streets of Minneapolis with the knee of a white police officer wedged into his neck. A video taken by a bystander captured the moment, showing Floyd begging for his life, repeatedly saying, “I can’t breathe” before he took his last breath.

Both Floyd and Black reportedly complained of shortness of breath moments before their deaths.

Holley, Black’s sister, said she still doesn’t understand how the defense attorney in Chauvin’s trial got Fowler’s name.
“It defies both common sense and basic standards of forensic pathology to suggest that the actions of law enforcement did not ‘directly cause’ or ‘significantly contribute’ to Anton’s death in light of video footage depicting Anton being chased, Tased, taken to the ground, and restrained in a prone position with significant compression of his upper body for approximately six minutes,” the lawsuit filed in December says.

“[T]he Medical Examiner’s report was written to obfuscate the otherwise obvious and inescapable conclusion that the involved police officers caused Anton’s death by interfering with his ability to breathe — creating positional asphyxia,” the lawsuit says.

Fowler and Dr. Alexander Russell, who performed Black’s autopsy, did not respond to WTOP’s multiple requests for comment. News of Fowler’s role as an expert witness in the Chauvin trial was first reported by The Intercept.

Joe Perez, a former internal affairs police captain in Prince George’s County, Maryland, who is not involved in either the Chauvin case or the Black lawsuit, said, in his opinion, Fowler’s role as a defense witness in the Chauvin case constitutes a conflict of interest, given Fowler’s stance as a defendant in an ongoing lawsuit involving an officer-involved death investigation in Maryland.

“It appears to me that they chose Mr. Fowler as an expert witness so that he can cosign on their version of what they say happened,” Perez told WTOP.

He said in his years of experience in internal affairs, medical examiners and police officers would often become friends over time — and that had the potential to lead to false narratives.

Kenneth Ravenell, the lead counsel for the Black family, mentioned other in-custody death cases Fowler oversaw that he questions, suggesting there is a pattern of controversial rulings.

The Intercept article broke down the cases of four men who died while in police custody in Maryland under Fowler’s watch. None were classified as homicide.

But in the 2015 case of Freddie Gray, the high profile death of a 25-year-old Black Baltimore man who died after suffering spinal injuries during a police van transport, Fowler did rule that death a homicide.

Fowler now works as a private, independent consultant in forensic pathology and medicine, according to his LinkedIn page.