Marc-Andre Fleury made 35 saves for his 16th career postseason shutout, Nicolas Roy scored twice and the Vegas Golden Knights beat Minnesota 4-0 in Game 4 of the first-round playoff series on Saturday night to push the Wild to the verge of elimination.

Alex Tuch and Mark Stone each got their third goal of the series and Keegan Kolesar had two assists for the Golden Knights, who have nine unanswered goals and lead 3-1 in the best-of-seven matchup. They get Game 5 at home on Monday night.

Joel Eriksson Ek had a goal challenged and erased by a replay review for the second straight game for the Wild, whose other stars continued to be stymied by Fleury and his defensemen.

Kirill Kaprizov had only two shots on goal, giving him eight in four games. Kevin Fiala, who has no points in the series, smashed his stick in frustration on the crossbar at a stoppage in play right after a couple of denials by Fleury in the third period. 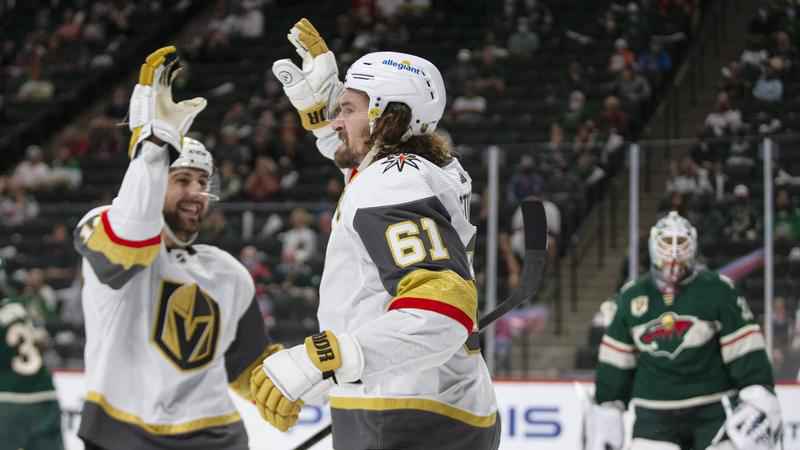 Since the last time they advanced in 2015, the Wild are 2-10 in the playoffs at Xcel Energy Center. The Golden Knights hadn’t won here in regulation in their four-year history until Game 3.

The Wild made some line shuffles after a broken left arm in Game 3 forced out right wing Marcus Johansson. Zach Parise and Kyle Rau slotted in, and Nick Bjugstad took a seat.

Parise, who’s in the ninth season of his 13-year, $98 million contract and the franchise leader in postseason goals, appeared in the 102nd playoff game of his career after being scratched for the first three games against the speedy Golden Knights.

Parise was one of the five Wild skaters Roy blazed a trail past for the first goal in the first period of the series for Vegas. Roy had only one goal in 23 previous playoff games for the Golden Knights.

Kolesar was the flipper of the slick give-and-go pass at mid-ice that sent Roy on his way, yet another player to show up on the scoresheet. Including Fleury, who had an assist in Game 3, the Golden Knights have used 21 players in the series — and 16 of them have at least one point.

Eriksson Ek, who has been Minnesota’s best player of the series after a breakout regular season, tied the game just 19 seconds later — until Vegas video coach Dave Rogowski struck again.

The challenge by the Golden Knights that Marcus Foligno was interfering with Fleury at the edge of the crease during Eriksson Ek’s shot was affirmed by the officials, just as in Game 3 when Eriksson Ek’s goal was waved off. That one was disallowed because the Wild were deemed offside on the play, and the Golden Knights praised Rogowski for his quick thinking to recommend the challenge to coach Peter DeBoer.

The boos from the 25% capacity crowd sounded as if they came from a full house. Midway through the second period, when Tuch sliced between Wild defensemen Jared Spurgeon and Matt Dumba and deked Cam Talbot (14 saves) for the 2-0 lead, the arena felt empty again, like it was earlier in the season.

Parise was bloodied by a high stick from Zach Whitecloud a few minutes after Tuch’s goal for a double minor penalty.

Soon after the first one was killed, Stone picked up a loose puck in the Minnesota zone and blew by Ryan Suter for the unassisted short-handed goal to put Vegas in firm control. The Wild fell to 0 for 8 on the power play in the series.

Stone has 16 goals and 17 assists in 31 career games in the playoffs. … Talbot made 14 saves. … Fleury tied Grant Fuhr for fourth place on the NHL’s all-time list with 150 postseason games played by a goalie.