Fire department: No sprinkler system in warehouse that caught fire in Minneapolis

UPDATE: A large warehouse was damaged by a fire in Minneapolis Friday night.

According to the Minneapolis Fire Department, crews responded to a fire on the 400 block of 35th Avenue Northeast at about 5 p.m. The large, one-story commercial building with a three-story structure in the center had heavy smoke and fire showing.

The department said all employees made it out of the building without injuries. However, an Xcel Energy worker was treated for smoke inhalation while shutting off power to the building.

Crews battled the flames for several hours, with a skeleton crew operating aerial master streams and firefighters knocking down smoldering fires inside the structure.

The department said the building didn’t have a sprinkler system.

Authorities large warehouse is on fire and being fought by Minneapolis firefighters Friday evening. 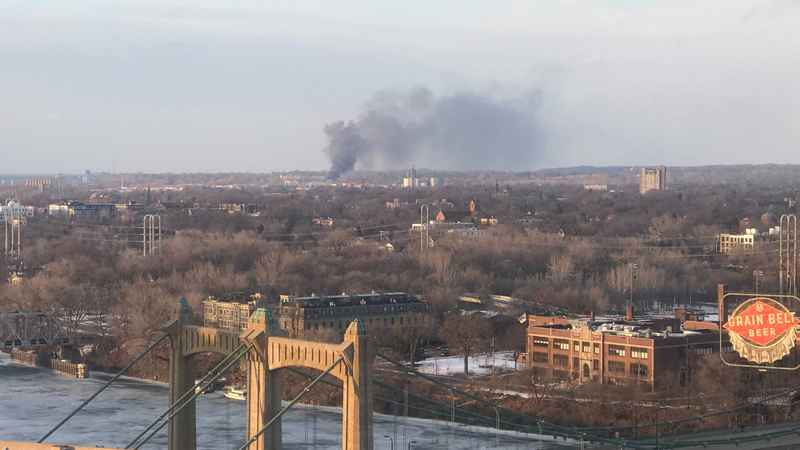 According to the Minneapolis Fire Department, crews are fighting the flames on the 400 block of 35th Avenue Northeast.

The fire is described as a defensive, two-alarm fire. No crews will be entering the building and an aerial master stream is flowing water to the roof to help blitz the fire.

The building is a one-square-block single-story building with a three-story tower in the center. The center tower has partially collapsed. The contents of the building are reported to be scrap metal, sheet metal and used appliances.

Everyone is reportedly out of the building with no injuries, the fire department said.

Structure Fire – 400 block 35th Ave NE. Crews are on scene at a large warehouse with fire showing from the center of the roof. Crews setting up for a defensive exterior attack. Reported that all people have exited the building.

This is a breaking news story, check back with KSTP for details.