The Bureau of Alcohol, Tobacco, Firearms and Explosives is hoping for fresh leads on the arson of Sacred Heart of Jesus Polish National Catholic Church.

The storied 107-year-old house of worship was gutted by fire back in April.

Now the ATF is releasing video and stills of a man they say was spotted near the fire scene.

"He’s a person of interest to us, perhaps he might have information,” said Jeff Reed, the assistant special agent-in-charge with the ATF’s St. Paul Field Division. “The smoke was seen about the same time he was captured on video in the area of the fire."

Authorities say the smoke and flames were first spotted around 6:40 p.m. on April 19. 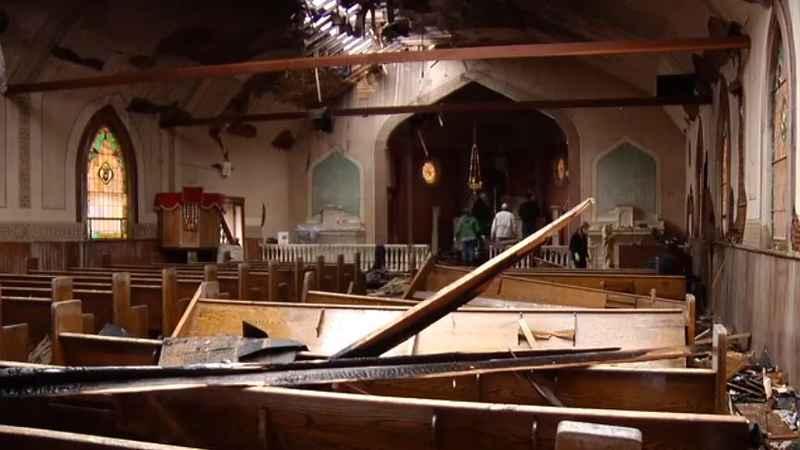 The church interior was quickly consumed by fire but remained standing.

Parishioners and neighbors looked on in shock as firefighters fought the blaze.

The Rev. John Kutek, the parish priest, says the congregation’s members are still dealing with the loss.

"We are still in the process of grieving, myself and parishioners,” he said. “It’s very hard to go to normal life."

The ATF is hoping the newly released images, along with a $5,000 reward for information, will flush out fresh leads in the case.

"The captures on the video can possibly provide us with identification so that we can speak with this person,” Reed said. “Perhaps move our investigation forward."

Kutek says he believes the fire was set in a small changing room and that someone set fire to his vestments, his ceremonial robes.

"So it was very painful to see my vestments burned and that room was black from the inside,” he said. “And from that room, fire went up into the attic and went to the back of the church."

Kutek suspects that marks on a church door are signs it was forced open.

He also says no one was supposed to be inside at the time of the fire and wonders about the person or persons involved.

“We are saddened what that person did, but as Christians we have hope,” Kutek said. “And faith that God will help us to rebuild.”

He says members of the congregation are resigned to the fact they’ll have to have the church demolished.

They’ve raised about $80,000 and hope to have the job done before the cold weather sets in.

Since the fire, church members have been using an assembly hall for services.

Kutek says he’d love to build a small chapel on the site but has to find sponsors and see what’s feasible.

“It’s very hard to say it because you know — ‘demo the church’ — my heart is broken, but that is what we have to do,” he said. “Yes, we could rebuild it but it would be very hard and very expensive.”