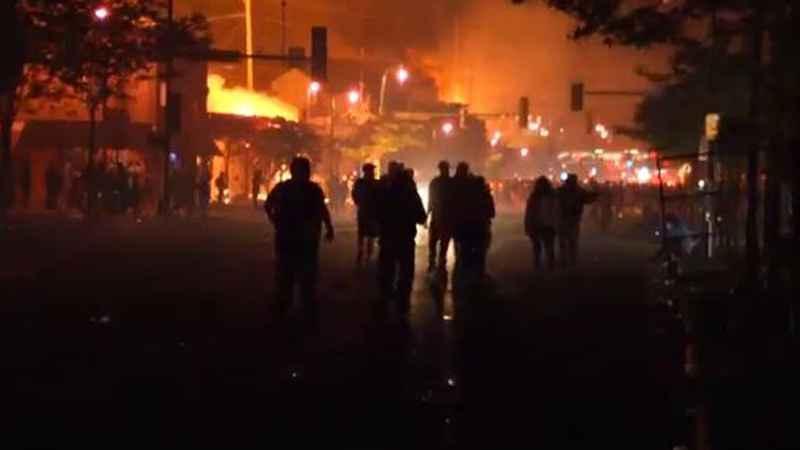 Fires burn during unrest in Minneapolis following the death of George Floyd. [KSTP]

This comes as the latest development in a lawsuit filed by the American Civil Liberties Union (ACLU) on behalf of a coalition of journalists alleging they were targeted by key Minneapolis and Minnesota State Patrol law enforcement personnel while covering protests over the police-involved killing of George Floyd.

U.S. District Judge Wilhelmina Wright noted in her order that law enforcement targeted the press, shot reporters with rubber bullets and even arrested journalists — notably, CNN correspondent Omar Jimenez was arrested in the midst of a live broadcast.

Wright granted a preliminary injunction halting various law enforcement from using force — including less-lethal tactics and chemical agents — taking photography equipment, arresting or threatening to arrest journalists in the field unless there is probable cause that they committed a crime, according to court documents.

"The record reflects that little if any investigation or discipline has been carried out by the State Defendants in response to the alleged misconduct in this case, which suggests that similar misconduct could recur," Wright wrote.

The class action complaint was originally filed in June of 2020.

In April of this year, the plaintiffs motioned for a temporary restraining order against law enforcement, including Minneapolis Police Chief Medaria Arradondo, Public Safety Commissioner John Harrington and Col. Matthew Langer, who commands the State Patrol. The court granted the order two days later and it was subsequently agreed that the restraining order would extend until a preliminary injunction was decided, court documents state.

On July 28, the court held an evidentiary hearing for the preliminary injunction.

Wright’s approval of the preliminary injunction also expanded the geographic limitations of the protection statewide. The restraining order didn’t expressly state its borders and only required copies of it to be distributed to Brooklyn Center officers and personnel.

The preliminary injunction will remain in place until the lawsuit is decided.