Thao: ‘I was assuming they were taking care of him’

UPDATE: Former Minneapolis Police Officer Tou Thao’s testimony continued after the lunch break. He is the first of the three ex-officers on trial to testify.

In response to a question from his attorney Robert Paule, Thao told jurors the ambulance arrived at 38th and Chicago behind him. He described seeing “the lights bouncing off the windows” in his view.

Thao explained he focused “full time” on crowd control even once the ambulance arrived. He said this was to “create a barrier […] to protect the officers and the paramedics so if one of the bystanders approached, I would be able to handle them quickly.”

He told the jury he didn’t understand the extent of Floyd’s condition until the firefighters arrived to the scene. “I kind of connected the dots,” said Thao. “I guess this guy was in critical condition when they left so the fire department was confused themselves, they were trying to find the paramedics so I went over .. and told them the paramedics needed them at 36th and Park.”

According to Thao, throughout the encounter he was in a support role. He testified that he did not touch Floyd. 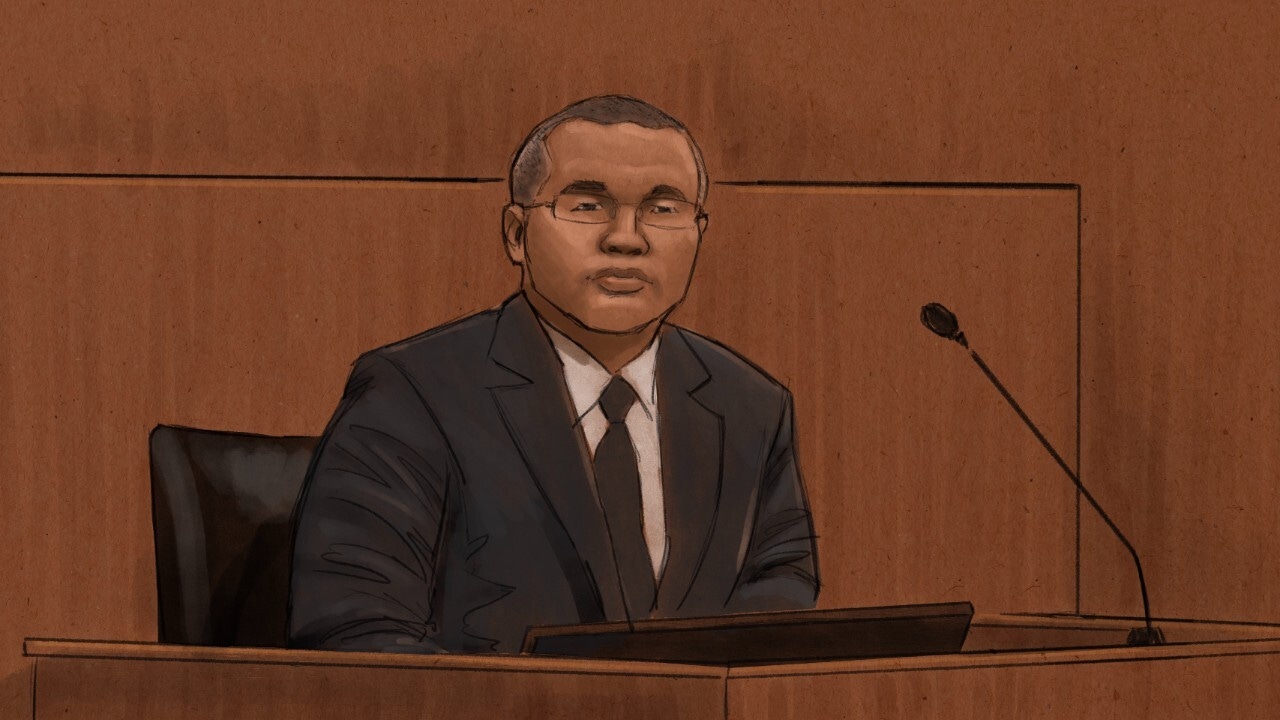 This sketch shows former MPD officer Tou Thao as he testifies Tuesday, Feb. 15, 2022, in the federal trial in which he and two others are charged with violating George Floyd's civil rights. (Courtesy: Cedric Hohnstadt)

Assistant U.S. Attorney LeeAnn Bell handled the cross-examination for the prosecution. She focused her early questions on the training Thao received. He confirmed that he learned inappropriate force would be a crime. The former MPD officer also verified he received CPR training multiple times throughout the years, including the importance of starting CPR immediately if someone doesn’t have a pulse.

Thao also confirmed he was trained to start CPR before paramedics arrive at a scene. He also testified he received training on the use of Narcan if a suspect is experiencing a drug overdose.

Bell asked, “[…] You’re aware from your training it’s a red flag if someone in your custody stops talking?” Thao responded, “Yes.”

In response to questions from Bell regarding use of force, Thao testified that force has to be proportional to the suspects resistance. He confirmed if a suspect stops resisting, force should no longer be used.

“Force that was reasonable in one situation might stop being reasonable some seconds later?” asked Bell. Thao responded, “potentially, yes” and confirmed situations can change.

During a line of questions about a police officer’s role in stopping crime, Thao testified that force is unnecessary if a person is unconscious or no longer has a pulse. He confirmed an officer must stop excessive force because that is a crime.

Bell followed up with, “You know from your training but also just from common sense, you have to intervene when you see an officer committing a crime?” Thao responded, “Yes.”

According to the criminal complaint, Thao faces one count for failing to intervene with Chauvin’s use of “unreasonable force”.

The Assistant U.S. Attorney also focused on the role of discipline within the Minneapolis Police Department. As she asked Thao several questions about crowd control training, she said, “You’re learning that discipline so that you follow processes and procedures even when there’s a lot going on […]?” which Thao confirmed.

He said, “You have to have situational awareness” and confirmed officers are trained to keep their head on a swivel so they know what’s happening around them.

Thao testified on May 25, 2020, he and Chauvin had limited information when they responded to 38th and Chicago. He confirmed Lane and Kueng were in charge of the scene.

Bell asked, “You had no report the person who passed the bill was violent?” and Thao responded no but that it sounded like there was a struggle.

Thao confirmed that he heard Floyd say ‘I can’t breathe.’ Although he testified earlier in the day that suspects started saying that phrase after the death of Eric Garner, Thao confirmed that those words still have to be considered.

Bell asked, “You don’t get to ignore it because someone else might say it untruthfully […]” and Thao agreed.

The former Minneapolis Police officer also reluctantly confirmed that Floyd was coherent and was reacting to the circumstances in front of him when he voiced concerns about entering the squad.

He told the jury he assumed Chauvin, Kueng and Lane were monitoring Floyd, including his medical condition as they restrained him.

Bell asked whether excited delirium teaches officers, “once they’re handcuffed and under control, you roll them on their side?” Thao responded, “I would say so.” He also confirmed positional asphyxia can be a concern if someone is experiencing excited delirium.

Thao told the jury he did not see anyone roll Floyd to his side, nor start CPR before the ambulance arrived.

The Assistant U.S. Attorney used cross-examination to point out Floyd said “Mr. Officer” and “please” during the restraint, which she characterized as respectful language.

Thao confirmed he was in a position to hear Floyd speak and saw Chauvin’s knee on Floyd’s neck. The ex-officer told jurors the point of a maximal restraint technique, which he said his former colleagues used, is to prevent a suspect from moving.

He also confirmed Floyd appeared the be unconscious during part of the restraint.

Bell honed in on the first six minutes of the restraint, which she argued showed Thao facing the former officers. The Assistant U.S. Attorney walked the jury through short portions of Thao’s body camera footage during that time. His defense attorney objected several times during the presentation of video and still images.

Thao testified the ex-officers made a group decision to not use a hobble device because he said it would require a supervisor to come to the scene and take pictures. According to Thao, this could’ve slowed medical attention from paramedics. Bell argued a hobble can be taken off before a supervisor arrives, if the subject is having a medical emergency. Thao rebutted that it wouldn’t make sense to apply the hobble in the first place.

Thao confirmed he was talking with the ex-officers and watching them while in roughly the same position for the first six minutes of the restraint, but also testified he was simultaneously keeping an eye on traffic and providing crowd control.

Bell followed up with, “You know that’s a red flag if someone stops speaking who had been speaking?” Thao responded, “Not always, but you should take note.”

As Bell showed still images from the city surveillance footage and cell phone video, she focused on  three minutes into the restraint. It showed Thao roughly in line with the other former officers and at times, looking down at them. He confirmed he looked back and forth between them and the bystanders.

Thao confirmed he saw the others continue to restraint Floyd, remaining in generally the same position. When Bell asked, he also confirmed you can’t wait for an ambulance if someone needs medical care.

Bell asked, “From your perspective, had he stopped resisting?” Thao responded. “It’s a possibility.”

UPDATE: The first of the three officers charged with violating George Floyd’s civil rights took the stand Tuesday as the defense began presenting its case.

Tou Thao took the stand in his own defense after Minnesota Bureau of Criminal Apprehension Special Agent Blake Hostetter briefly testified. Thao walked through his personal life, noting he’s married with three kids, and his childhood. He explained that his parents were refugees from Laos, his family was poor and his father was strict.

Thao said his family left north Minneapolis and moved to Fridley when he was in fifth grade because his “cousins were joining gangs so (my parents) didn’t want us getting into that.” He also described some frightening violence from his father, saying his dad beat him and his siblings with an extension cord and threatened to kill them, sometimes putting guns to their heads.

Regarding MPD, Thao said he started as a community service officer before joining the MPD Academy, which he finished in 2009. He noted he was laid off due to city budget problems after he finished the academy and briefly worked security at a Minneapolis hospital.

But his lawyer highlighted a CD Thao was given at his MPD graduation, which showed pictures from his training, including several of a cadet with a knee on the back and neck of a handcuffed suspect. Thao testified that that form was taught at the MPD Academy so officers would use his knee as “leverage” to prevent a suspect from rolling around or getting up. He also said he was never trained that doing that was improper.

The former officer said he’s “never seen this much of a struggle” about the officers trying to get Floyd into the back of a squad. He also testified that he heard Floyd say, “I can’t breathe” when he was in the back of the squad but said “it became a regular occurrence” to hear people say that after Eric Garner’s death in 2014.

Thao said Floyd had “super-human strength, more strength than three officers could handle,” and added that, “it was obvious (Floyd) was under the influence of some kind of drugs … he was very sweaty … it’s a sign of drug use.” He later said he heard Floyd say he ate drugs.

He continued, saying Floyd was “out of control” and that’s why he suggested they hog-tie him. He noted that hobble device would’ve made it difficult for emergency personnel to help Floyd and would’ve delayed medical attention.

Floyd’s actions, plus him being very sweaty, made Thao believe Floyd was experiencing excited delirium, Thao testified. He said he’d experienced around 30 other people experience excited delirium in his eight years, noting “we’d restrain them” until medics arrived.

Thao said he tried to make himself a “human traffic cone” by standing in the street to keep cars from hitting Floyd and the officers. While he was doing that, he said he didn’t worry about what the other officers were doing to Floyd.

Federal prosecutors rested their case Monday after calling Darnella Frazier to the stand.

Frazier, the teenager who recorded cell phone video of Floyd’s death, was their final witness.

While on the stand, Frazier was asked by Assistant U.S. Attorney Leeann Bell if she saw anything that needed protection or patrolling.

Frazier said “No, other than George Floyd…I would say he was the only one who needed protection.”

Longo said Thao, Kueng and Lane acted “contrary or inconsistent with generally accepted policing practices” and “it’s an absolute duty” to provide care to the person in your custody.

In a heated exchange, Lane’s attorney Earl Gray asked whether the witness expected Lane to “get up, walk over where this crowd is at, pick Mr. Chauvin up, throw him off of Mr. Floyd and intervene that way?”

Longo responded with “…I think someone should have done something, yes.”

Thao and Kueng told the judge on Monday that they will take the stand in the days to come. Lane confirmed Tuesday that he will also testify.