Some much needed rain has been hitting Minnesota in the last few days.

That of course, included the precipitation that triggered flash flooding in Cambridge, as much as five inches of water.

“It was like a giant wall dropped,” recalls Alex Carlson. “The winds went crazy, hail basically smashed everything it could.”

But eleven miles away, Alan and Nancy Teich’s weather gauge showed barely a half-inch of rainfall. 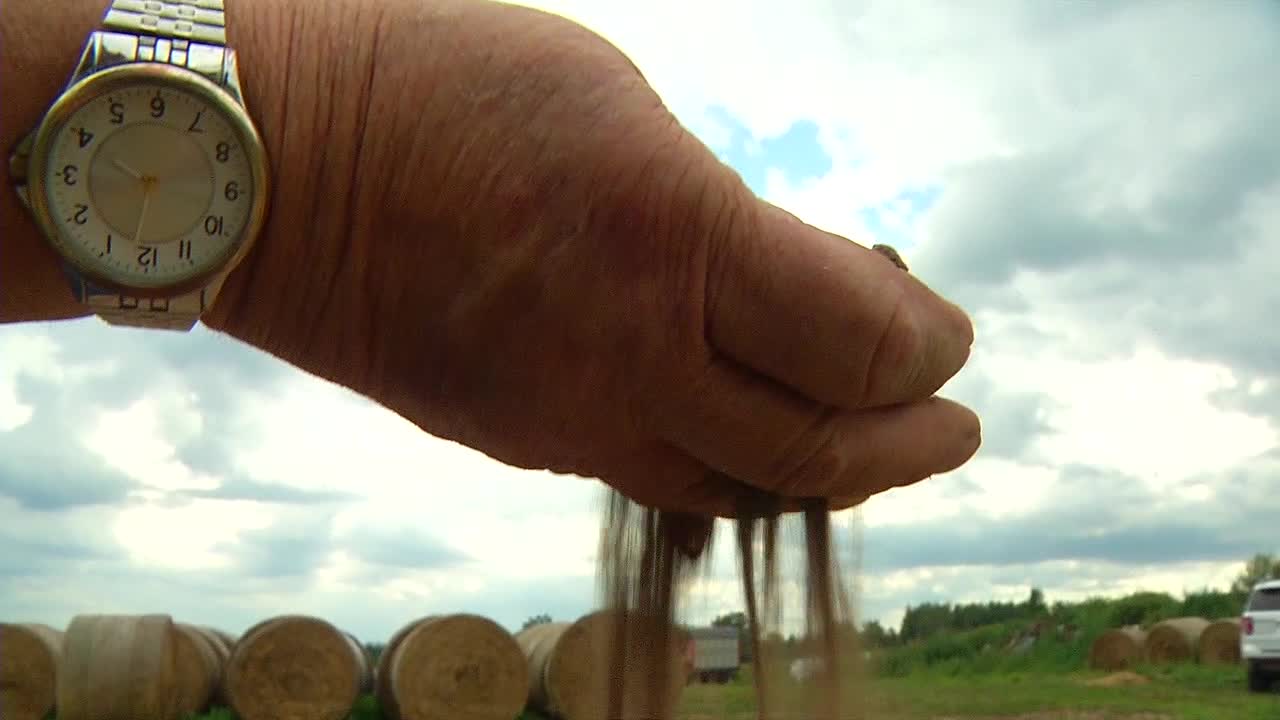 Dry dirt falls through a farmer's fingers, showing the significance of this year's drought (KSTP).

“It is pretty dry,” Alan says. “I mean, we’re about five inches of rain behind the scheduled season, what we usually get.”

The Teichs shared with 5 EYEWINESS NEWS post-storm photos of the area around their Isanti County farm:  700 acres of corn and soybeans, hurting for water.

The soil crumbling in Alan’s hand before that half-inch fell.

The Teichs says they’re still trying to recover from 2021’s drought, considered “severe” by the Minnesota Department of Agriculture.

The couple says this year’s moderate drought is not much better.

“It’s still a drought to us, on our crops as you can see, the corn is a lot shorter than what it should be,” Alan says. “It should be three feet taller, so we’re going to have to chop a little bit more to feed the animals.”

He notes dryer weather means lower yields: 100 bushels of corn per acre, versus 200 in a good year.

Alan says his overall farm income has been cut in half.

“Probably 60 to 70 thousand dollars behind the costs we usually get in a good year,” he adds.

The National Weather Service says so far this year, Minnesota has received more than 16.5 inches of rain, nearly five inches below normal.

The largest deficit came in June, nearly three-and-a-half inches short of the average for that month.

“We’re in this cycle of extreme weather events, and extreme highs and lows,” says Minnesota Agriculture Commissioner Thom Petersen. “I think farmers are resilient and they are creative, but I think that’s one of the concerns. That we’re going to see more of these type of events and we’re going to need to be prepared for those.”

But for the most part, there’s moderate dryness in the lower half to lower third of the state.

The idea is to collect runoff water in the spring, store it in farm ponds or reservoirs, then use that water as supplemental irrigation during the growing season.

“A lot of the rain we’ve had this year is hit or miss,” Strock explains. “We can take some of the drainage water and when we don’t need it, store it and reuse it and reapply it on the land later in the season to hopefully get a benefit for the farmers.”

“You can only weather so much,” Nancy says. “You know, possibly cashing out an annuity or your retirement money to make a payment, but you can’t keep doing that. This is an important year for something to go right.”

Alan says the farm received just a light drizzle Thursday, but nothing measureable.

He thinks he’ll need several good downpours of several inches to make any difference for his crops.

His most fervent hope is for those threatening skies to yield a crop of rain.

“Rain has been south of us, rain has been north of us, so we’re hoping it comes through the next storm and gets us,” Alan says. “It’s tough to weather two years in a row, but we hope we don’t have a third year.”